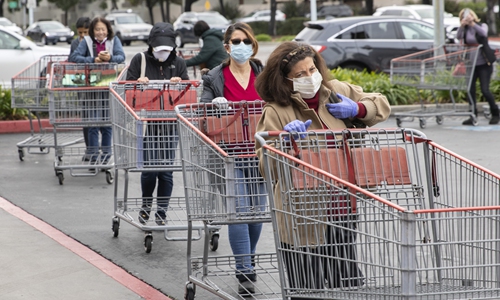 US citizens queue up to buy daily necessities at a supermarket in San Francisco, the US on March 16. (Photo: Global Times)

An unprecedented $2.2 trillion rescue package envisioned to save the US economy from a free fall highlights a massive downward pressure on US economy hit hard by the spreading coronavirus, market observers said.

The situation adds urgency to stepped-up efforts on the part of China to prepare its battered economy for more unexpected shocks, they noted, calling for measures including a near-term deposit interest rate cut.

In a fresh move to combat the COVID-19 pandemic, the US Senate passed the $2.2 trillion coronavirus relief bill late Wednesday, the largest in US history, which would steer direct payments to most Americans.

The emergency rescue bill built on the US Federal Reserve's commitment on Monday to buy an unlimited amount of US Treasuries and mortgage-backed securities. The Fed made two emergency rate cuts earlier in March that trimmed its benchmark funds target rate to close to zero.

"We may well be in a recession," although there's nothing fundamentally wrong with the US economy, Fed Chairman Jerome Powell said in a rare televised interview appearance on Thursday.

"People are being asked to close their businesses and stay home from work. At a certain point, we will get the spread of the virus under control and confidence will return," he said, noting that the Fed still has policy room for more action.

The US has gone to extremes in its monetary policy, rendering a forceful fiscal policy indispensable for the salvation of its economy and job market from the coronavirus fallout, Tang Jianwei, chief researcher at Bank of Communications' Financial Research Center, told the Global Times on Thursday.

A spike in jobless claims to nearly 3.3 million last week, a shocking high amid rising US growth woes is animating anxiety about the economic costs of the pandemic that has dealt a big blow to the financial well-being of US households, considering a coronavirus-induced stock rout, market watchers said.

G20 economies are set to experience an unprecedented shock in the first half of the year and they are on pace for a full-year contraction in 2020 "as the rising economic costs of the coronavirus shock and the policy responses to combat the downturn are becoming clearer," said Moody's analysts in a research note sent to the Global Times on Thursday.

The credit rating agency revised down its G20 real GDP forecast to a 0.5 percent contraction this year from a 2.6 percent growth previously.

The grim picture at large is believed to prompt China to prepare its economy for more shocks as well.

There is a high possibility that the global economy would post a contraction this year, putting immense pressure on China's external demand. The evolution of the pandemic also puts global supply chains at stake, handicapping efforts to fully recommence economic activity inside China even though the virus has been effectively contained domestically, Tang said.

China's external demand is likely to fall 30 percent year-on-year in the next one or two quarters, resulting in about job losses of about 18 million, Nomura economists Lu Ting and Wang Jing said in a bylined article posted Thursday by Chinese financial news site caixin.com.

The key to addressing the layoff issue is to stabilize businesses battered by the coronavirus outbreak. Failure in overcoming the disease-inflicted hardships would lead to layoffs or businesses failures, Bank of Communications' Tang said.

Calls are rising for China's central bank to cut deposit rates as it is expected to pursue an appropriate monetary policy to cushion the economic blow of the disease.

Massive monetary easing has prevailed across the globe, with many major economies coming close with near-zero or negative interest rates. By comparison, China's positive interest rate environment means the nation still has much leeway to lower its rates, according to Tang.

Germany, the UK and South Korea are among major economies other than the US that have followed suit in flexing their monetary and fiscal muscles in an attempt to cushion the blow of the coronavirus pandemic.

The previous few rate cuts were asymmetric, in that they only slashed lending rates. A reduction in deposit rates, as Tang put it, is required to motivate banks into an active involvement in extending credit to the real economy.

The researcher forecast a deposit rate cut of 25 basis points (bps) as well as lending rate cuts totaling 30 bps for the whole year.

Other than resorting to monetary power that allows for more liquidity to be injected into the market, more measures could be considered on the fiscal front, such as tax and fee cuts, and transfer payments, he noted, adding that fiscal policy should be more proactive to arrest the downturn.