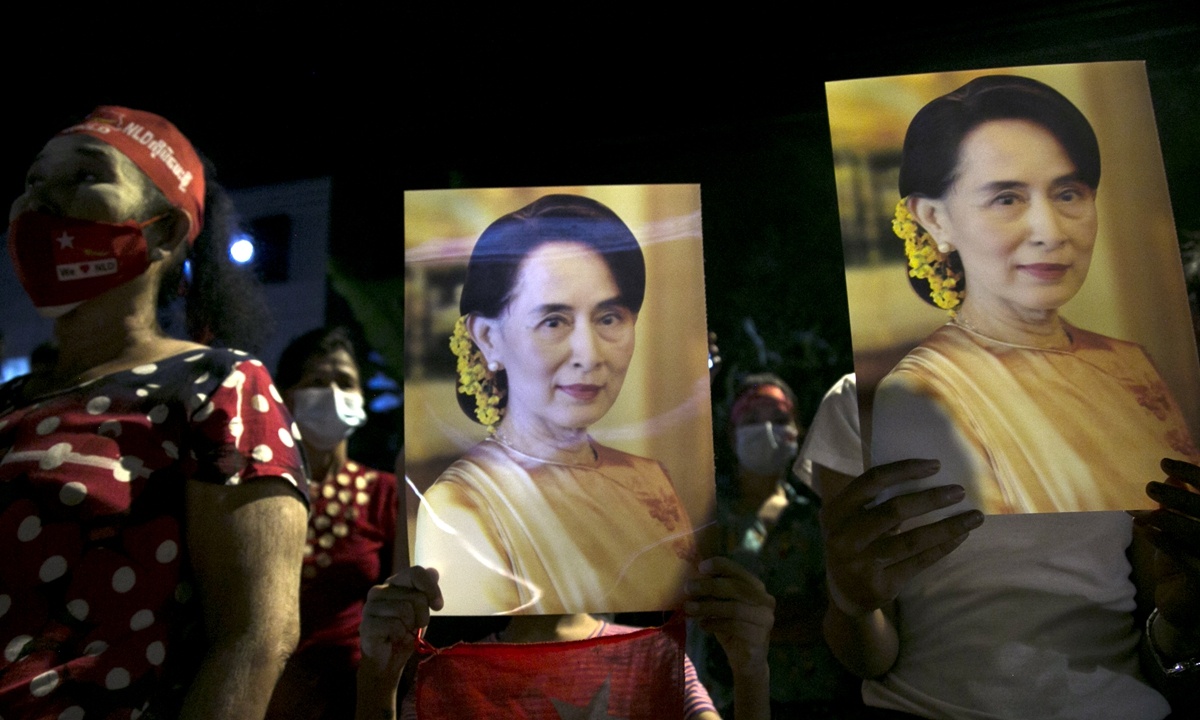 Supporters of the National League for Democracy (NLD) party hold up portraits of Aung San Suu Kyi in front of the party's headquarters in Yangon on Sunday. Photo: AFP

Observers said that under the continued rule of Myanmar's National League for Democracy (NLD) led by Aung San Suu Kyi, the China-Myanmar relationship will keep improving in the future, after the party secured enough seats in parliament to form the next government.

The NLD won 396 seats, according to the election results published on Saturday evening (local time), more than the 322 needed to form a new government,. The results also surpassed the NLD’s historic score of winning 390 seats in the 2015 election. Many media outlets called the victory a “landslide.”

Observers reached by the Global Times on Sunday expressed optimism over the  post-election China-Myanmar relations.

Hein Khaing, an expert on Myanmar and also secretary general of the Myanmar Chinese Chamber of Commerce, believed that the NLD will continue Myanmar's long-standing diplomatic principles of independence and non-alignment in its foreign policy, and it will continue its friendly China policy.

"The current NLD government has conducted very good cooperation with the Chinese government, and the two sides have promoted many cooperation projects," Song said on Sunday. He noted that in the context of the continued rule of the NLD, Myanmar's China policy will also be maintained in the future and China-Myanmar relations will become better.

Observers also pointed out the three main reasons that had led to the NLD’s victory in the election: the popular rejection of the previous military junta rule; Suu Kyi’s personal influence; and weak competition from other parties.

Song said that Myanmar citizens still have bad memories of the past ruling military junta and the NLD’s competitor, the military-backed Union Solidarity and Development Party (USDP).

The USDP won 33 seats in the election, a further narrowing of its influence from the 42 seats it gained in 2015.

Hein Khaing said that Suu Kyi’s personal influence was also a significant factor in the elections.

“Suu Kyi's charisma is unmatched in Myanmar politics, and it is hard for others to challenge her position,” Hein Khaing said.

Hein Khaing noted that the NLD's constant social media campaign centered on Suu Kyi, coupled with the personal image it had cultivated of her over the past few decades, has made her and her ruling party the language of Myanmar's highest political goal: "democracy and national reconciliation."

Even so, Hein Khaing expressed his surprise over the “landslide” victory, as he and many other observers had predicted that the number of seats gained by the NLD would be less than what they got in 2015, as the party had failed to fulfill the three tasks of "national reconciliation, constitutional amendment and economic development" that it proposed at the beginning of its taking office in 2015.

Hein Khaing said the performance of NLD’s main rival in the election - the USDP - was questionable.

According to reports published by local media, the chairman of the USDP, U Than Htay, said there are no “Muslims or Chinese” in his bloodline at an election campaign event in October.

The comments were criticized by the public as racist.

Hein Khaing pointed out that while a party should seek to rally more support, U Than Htay’s comments instead showed a rejection of foreigners, which limited his and the USDP’s support from Burmese and Buddhist groups.

"In the election, many Myanmar citizens voted ‘in tears,’” Hein Khaing said, noting that although the NLD’s performance during its ruling period was flawed, voters weren’t given a better alternative. He said the other parties apparently found it hard to gain public trust.

The NLD, which won the support of 80 percent of the votes, will form a new government by the end of March next year and elect a new president and vice president for another five years.

Hein Khaing said that "national reconciliation, constitutional amendment and economic development" will still be the three tasks for the NLD in the incoming government, but the public are not optimistic that the party will fulfill them.

Many new parties emerged in this election, showing that Myanmar’s social divisions have deepened during the past five years, he said.