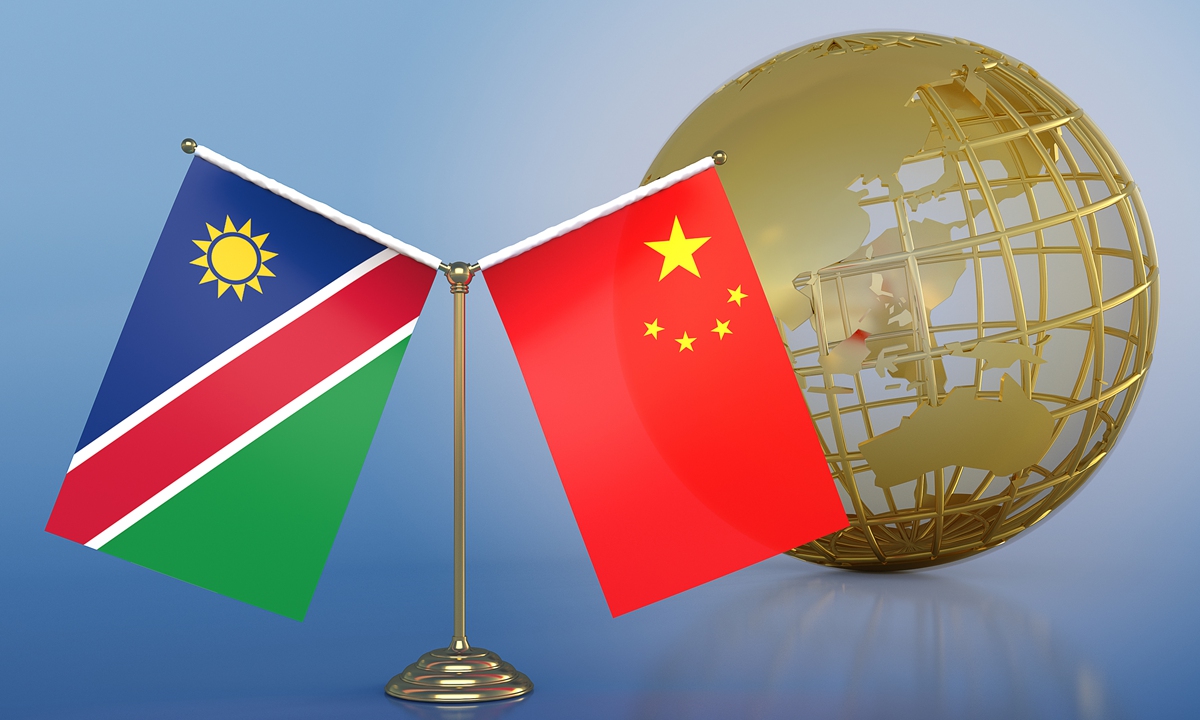 On September 17, 2021, the Shenzhou-12 manned spaceship returned to Earth. In the return capsule, there was a special item, the Namibian national flag. In the past three months, the flag accompanied the three Chinese astronauts flying in the vast space.
China-Namibia space cooperation began in 2000. A year later, China Telemetry, Tracking and Command Station was built and put into operation in Swakopmund, Namibia. In the following 20 years, this station, the first of this kind established by China in the Southern hemisphere, has closely linked China, Namibia with the space. It has become a demonstration project for the peaceful development of space between China and Namibia.
Just like the Chinese people, the Namibian people also have strong interests in space exploration. Over the past 20 years, a number of Namibian technicians in space technology have benefited from the training programs of the station. In 2002, China and Namibia signed an agreement on training Namibian personnel in Beijing. From 2004 to 2011, China successively completed three rounds of technical training, including professional theoretical knowledge, aerospace technical knowledge and operation skills.
"After many batches of training, Namibian technicians have been able to independently complete the tracking tasks and form a talent echelon." The first Namibian technical team leader of the station said during an interview. He has received in-station training since 2004, and passed the postgraduate examination under the guidance of Chinese personnel. Later he became the Director of Communications Regulatory Authority of Namibia.
In 2012, China and Namibia signed an agreement on sending Namibian technicians to work at the station in Namibia. Since June 2012, Namibian personnel have worked in the station by turns.
"Namibia and China have carried out space cooperation for more than 20 years. With the help of China, more and more Namibian engineers have become the backbone of Namibia's aerospace field." Kent, the executive director of the Ministry of Higher Education of Namibia said in an interview.
In addition to cultivating talents, China and Namibia have also carried out aerospace cooperation in other field. In 2018, China and Namibia signed an agreement on building a satellite data receiving ground station in Namibia. Once completed, it will play an important role in many fields such as weather forecast, environmental monitoring and energy exploration.
In 2010, astronauts Yang Liwei and Liu Boming visited Namibia, which was the first visit to Africa by a Chinese manned space friendly delegation, setting off a "Chinese space fever" in Namibia. During the visit, the China Aerospace Science and Technology Exhibition Center was also officially launched, and the founding president Sam Nujoma attended the opening ceremony.
In 2019, two Chinese astronauts, Liu Yang and Chen Dong visited Namibia and paid a courtesy call to President Hage Geingob. Among the only three official overseas visits by Chinese astronauts, two have made the way to Namibia, which fully attests to the close bond between China and Namibia, the two comprehensive strategic cooperative partners. During the visits, the Chinese astronauts always spent some time interacting with local middle school and college students.
"Although this is my first visit to Namibia, I have flown over Namibia more than 200 times in the Shenzhou-9 spaceship. So when I came here to meet you, I feel as if I am meeting old friends." Liu Yang, the first Chinese female astronaut in space, shared her story with many Namibian girls.
"I hope to see female astronauts in Namibia in the future. I want to follow in Liu Yang's footsteps because she inspired me. Maybe one day I will become an astronaut like her." A female student majoring in surveying and mapping said excitedly.
Carrying the Namibian flag, the Shenzhou-12 manned spaceship flew into space, full of expectations and dreams of these "little Liu Yangs." At the opening ceremony of Shenzhou-12 manned spaceship's return capsule on 27 September, China handed over the national flag and certification to Namibia.
"We are very proud that Namibia is the only country in Africa that helps China to build a satellite tracking station. We are ready to continue to participate in China's future space missions. For our common bright future, we are willing to work with China to move forward hand in hand on the long march in the new era." Namibian Ambassador to China Kaiyamo said after receiving the Namibian flag.
China's space industry belongs not only to China, but also to Africa and the mankind at large. Generations of Chinese and Namibian astronauts will work together in the pursuit of building a community with a shared future for global development.
May the common dream of China and Namibia shines in space!
The author is an observer of international issues.