Two big technology events in China lately have once again put the nation's capabilities in artificial intelligence (AI) in the spotlight. 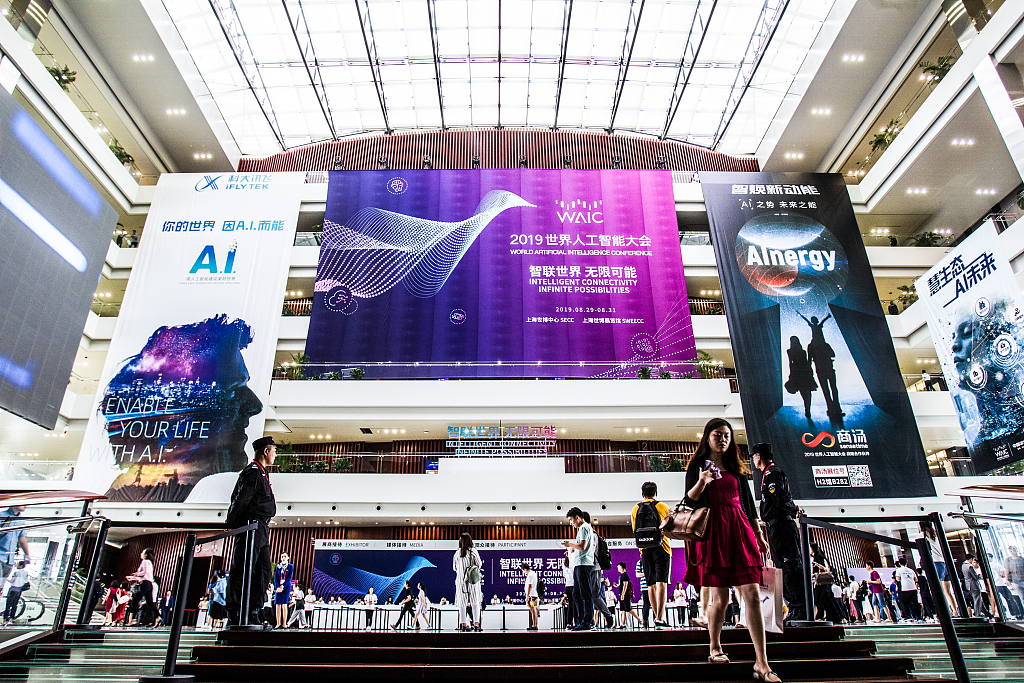 At the opening ceremony of the 2019 Smart China Expo in Southwest China's Chongqing Municipality on Monday, Chinese Vice Premier Liu He stated that China needs to strengthen AI basic research and technological research and development.

A variety of AI hardware and applications showcased at the 2019 World Artificial Intelligence Conference (WAIC) in Shanghai, which runs from Thursday to Saturday, have stirred greater interest in AI technologies that are all the rage these days.

Still, China needs to stay coolheaded and push for technology-based innovation amid escalating trade tensions with the US. This seems especially the case in the arena of AI, which has increasingly become a two-man contest.

Findings from a recent survey by US consulting firm A.T. Kearney showed that 39 percent of almost 450 senior business executives worldwide reckon that China is likely to overtake the US as the global leader in AI, while 35 percent of the respondents think this scenario is unlikely.

Numbers measuring the global AI landscape also suggest China is playing catch-up with the US. By the end of March, there were 5,386 active AI firms across the world, according to figures released in April by the China Academy of Information and Communications Technology (CAICT), a research institute under the Ministry of Industry and Information Technology. The US is home to 2,169 AI firms while the Chinese mainland has 1,189 AI companies. The UK is ranked third with 404 AI businesses, followed by Canada with 303 and India with 169.

Besides, 17 of a total of 41 AI unicorns globally are in China, while the US is home to 18 of them, per CAICT data.

The AI rivalry that could give clues about the future strength of the two economies certainly matters a lot, especially taking into account the worsening trade situation.

But rather than getting enthralled by the accomplishments that might create an atmosphere of pompous optimism, China needs to scale up its effective AI investment to turn the tech buzzword into an economic engine.

Some industry data already points to China getting ahead of the US in AI investment, but there remains skepticism over the extent to which the investment in AI, or the various technologies and concepts revolving around AI, can be translated into China's AI prowess. A fast-track approach to funding and capital market success risks eroding the foundations of AI strength.

A Wall Street Journal report earlier in August revealed that SoftBank-backed Indian startup Engineer.ai, which claims to use AI to automate the development of mobile apps, in fact relies on human engineers to put together the apps, a striking example of exaggerated AI savviness that should serve as a warning to numerous companies in China that have ridden, or plan to ride, the AI wave.

The call made by Liu, the vice premier, to double down on AI basic research therefore points industry participants in the right direction.

As for AI-optimized chipsets and wide-ranging gadgets using AI technologies, a raft of Chinese companies are already among the early players in the market.

Nonetheless, greater commitments are still required on the hardware side. With more progress on in-house AI chips, the nation could be a step closer to its goal of advanced chipmaking. This would mean that China's AI ambition won't be at the mercy of others.

In the case of talent nurturing, an annual AI training camp organized by Kai-fu Lee's venture capital firm Sinovation Ventures can be seen as a prototype of efforts to build sustainable AI talent pipelines.

At the closing ceremony of the third DeeCamp, which was launched by Sinovation Ventures in 2017, at the University of the Chinese Academy of Sciences in Beijing earlier this month, a handful of AI-powered projects was presented, including an AI program playing farmers versus landlords, a popular Chinese card game.

This year's training camp wrapped up with 600 students from 130 universities both home and abroad finishing 50 AI projects within merely four weeks, under the guidance of top industry mentors such as Lee.

Some of the DeeCamp participants have joined Sinovation Ventures and other AI ventures, adding to the talent pool for China's AI prowess.

It is hoped that more companies, especially promising startups in the arena, could join the talent push.

The importance of startups was highlighted by International Data Corporation (IDC) at an innovation salon in Beijing in the middle of August. The market research firm said that the latest round of the AI boom has been led by star startups, which have performed exceptionally in proving appealing to users, among other aspects, in the niche markets of computer vision, speech recognition and language understanding.

Last but not the least, AI technologies need to gain wider adoption. This calls for efforts to push more traditional sectors in the home market to embrace the new technology, as well as to pitch made-in-China AI products and applications to overseas markets.

A sub-forum on AI development along the routes of the China-proposed Belt and Road Initiative (BRI) to be hosted by Shanghai-based AI startup DeepBlue on Saturday during the WAIC might give an idea of how China's homegrown AI expertise can be exported to BRI markets.

The company proposed the establishment of a BRI AI industrial alliance in January. The first batch of countries and regions joining the alliance includes Indonesia, Singapore, Germany, the Netherlands and Luxembourg. More BRI economies are expected to join the alliance at the sub-forum.

Such initiatives will over time build China into a global hub for AI, putting it in an unrivaled spot in future power wrestling.