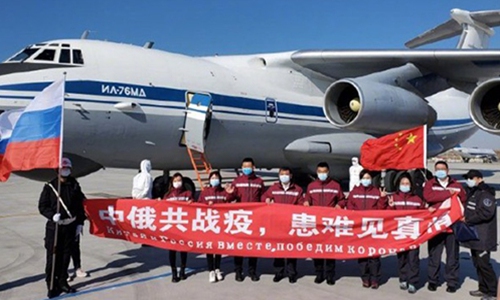 The Chinese medical expert team poses for a group photo, before departing for Russia, at the Harbin airport in Northeast China's Heilongjiang Province in April. (Photo: Global Times)

The COVID-19 outbreak has expanded to most other countries in just one month, becoming the worst pandemic in a century. Global cooperation is the only way to maximize containment efforts for the benefit of all humanity. However, economic nationalism and populism prevail in Western countries and some politicians still shirk their responsibility. This damages global governance awareness, trust among nations and global efforts to fight the virus.

Following the 2008 financial crisis, the G20 established a mechanism in a very short time. The mechanism proposed effective solutions to many problems confronting the world economy. However, the G20 appears to be powerless amid coronavirus pandemic, which has caused far more serious harm. This indicates the "global village" can break down under the growing influence of economic nationalism.

While some Western countries are busy blaming each other and tarnishing non-Western nations, China and Russia have joined hands to tackle the COVID-19. This is a showcase of close Sino-Russian relations. China and Russia have upgraded their relations to a comprehensive strategic partnership of coordination for a new era. The two nations are committed to working together to maintain the stability of the international order, and helping each other's domestic development.

The leaders of China and Russia keep in close contact to ensure their joint anti-epidemic actions are carried out quickly. Over the last month, President Xi Jinping and President Vladimir Putin have had two phone calls. The communication is far more frequent than with leaders of other countries, demonstrating the significant partnership and mutual trust between the two countries.

The two leaders discussed issues such as strengthening exchanges of experts, ensuring supplies of anti-epidemic material and opportunities to enhance cooperation in various fields. The leaders of China and Russia personally direct their respective anti-epidemic work, which is conducive to coordinating all departments and efficiently conducting disaster-relieving work. The two leaders also expressed support and thanked each other during their calls.

Low-key and pragmatic, China and Russia display their support with action. They generously provide urgently needed anti-epidemic materials to each other. On February 5, when China was struggling against COVID-19, Russia delivered urgently needed medical materials directly to Wuhan and sent medical and anti-epidemic experts to conduct joint research with Chinese experts. On February 9, the Russian government provided China with 23 tons of medical relief materials. It is likely that Russia used its strategic reserves to help China since the light industry in Russia is underdeveloped. In April, epidemic broke out in Russia, and China offered Russia COVID-19 aid, including medical masks, protective suits, surgical gloves and thermometers.

When some Western countries attempt to stigmatize China, Russia comes to China's defense in the international arena. When talking with Xi, Putin pointed out that it was unacceptable to smear China for the spread of COVID-19. On April 14, Russian Foreign Minister Sergei Lavrov said claims that China should pay for economic damage caused by the pandemic made his "hair stand on end." While Western countries keep throwing mud at China, Russia gives its friend strongest moral support. China and Russia have developed an intimate relationship through all-round cooperation between governments, academia and people.

The relationship between nations is the same as that between people. A friend in need is a friend indeed. The pandemic has helped show us who our true friends are. During the virus fight, people in both countries have behaved irrationally and spread unfounded criticism of each other. However, the Western media deliberately exaggerated isolated cases of friction and badmouthed the overall situation of Sino-Russian cooperation.

Conflict between great powers is inevitable, and we should view China-Russia relations from a wider perspective. When the pandemic struck, Western countries abandoned the "Good Neighbor Policy" advocated by former US president Franklin Roosevelt in the 1930s. In contrast, China and Russia cooperated in the battle against the virus, laying a stronger foundation for stable relations between the two countries.

Starting in 2008, economic nationalism gradually evolved from an attitude adopted by minority groups to a social movement of the general public. After 2016, as economic nationalism has extended its influence, anti-globalization becomes a policy option for some powers that once led globalization. The pandemic has greatly accelerated anti-globalization trend. Technological nationalism, market decoupling and restrictions on people's movement, have all been on the rise. Even when the pandemic is over, these measures will not be completely cancelled. As economic nationalism and globalization collide, global cooperation is sure to be more difficult. The China-Russia comprehensive strategic partnership of coordination for a new era serves as a model for the great power relations in the post-pandemic era. When globalization encounters setbacks, the cooperation based on coordinated development is an ideal choice.