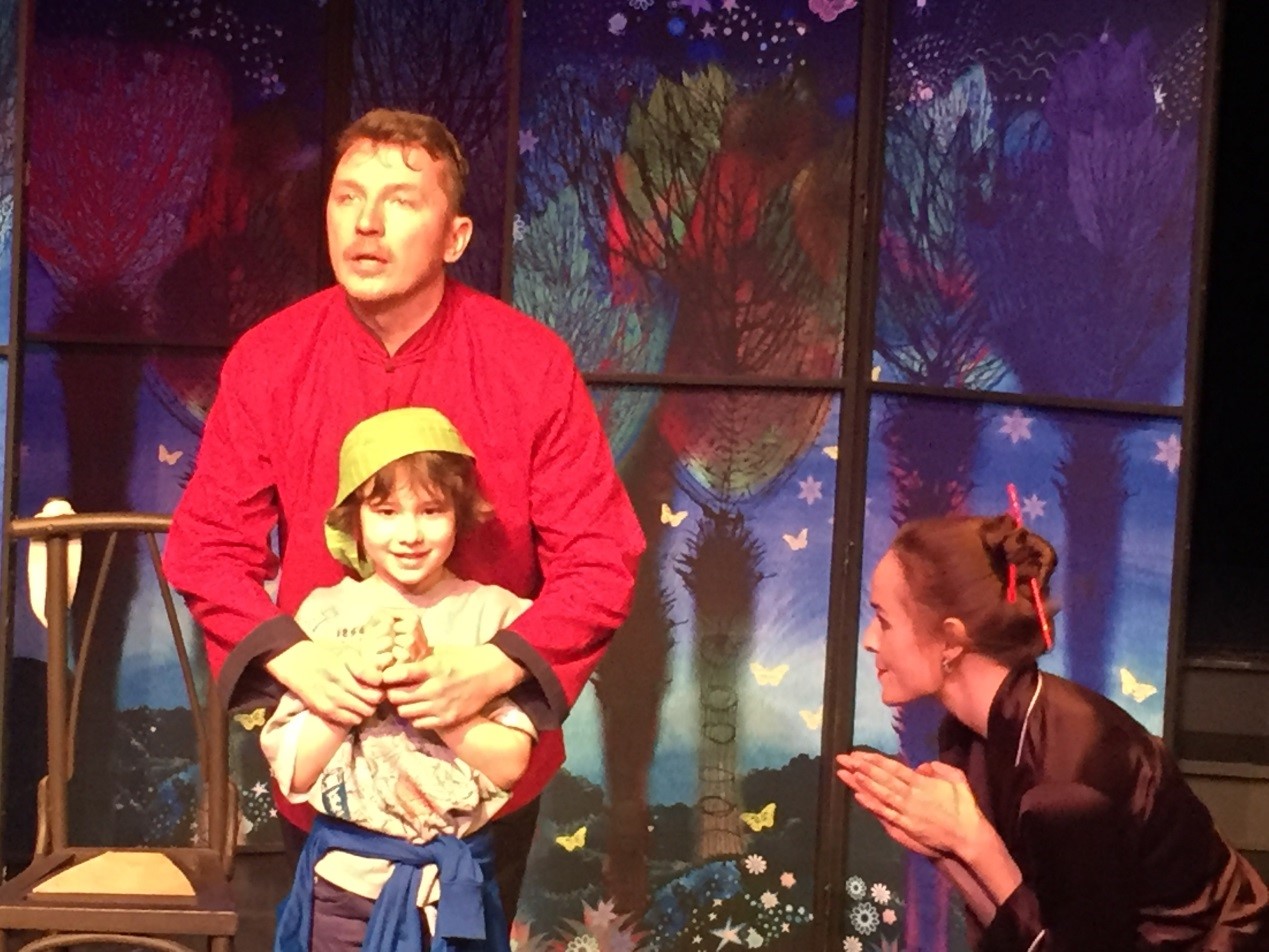 Actors interact with a child on the stage at premiere of a fairy tale play adapted from “With the Chinese Fairy Tales – All the Year Round” a book by Irina Zakharova, a meritorious cultural activist and famous sinologist in Russia.  (Photo: People’s Daily)

The pragmatic cooperation between China and Russia has demonstrated broader development prospects, as the year 2019 marks the 70th anniversary of the establishment of diplomatic ties between these two countries.

The two countries are eyeing more extensive cooperation in various sectors including economy, trade, people-to-people exchanges and science and technology, carrying out dialogues on these sectors and sealing a slew of agreements.

This momentum has reflected that China and Russia are transforming the advantages of their high-level political relations into more pragmatic cooperation outcomes.

The extensive China-Russia cooperation can be vividly reflected by activities held between the two sides in last half month.

On May 16, the business forum China-Russia Dialogue, with the theme of looking for alignment and growth points for bilateral economic and trade cooperation, was held in Moscow. On May 23, the third meeting of the Council of Cooperation between the upper and middle reaches of the Yangtze River and the Volga Federal District kicked off in Cheboksary of Russia.

A solar power station in the Samara region with an investment of 100 million yuan (about $14.47 million) by a Chinese enterprise has been put into operation. In Ulyanovsk, the hometown of Lenin, China and Russia are building a medical complex in a special economic port zone. The city also launches Russia’s first 250-odd megawatt industrial wind farm with its Chinese partners.

The strategic task facing China and Russia is to transform the advantages of the unprecedented high-level political relations between the two countries into pragmatic cooperation outcomes in areas including economy and people-to-people and cultural engagement. Specifically, the two sides need to focus on realizing balanced quantitative and qualitative economic cooperation and promoting diversified trade structure.

Over the past few years, the two countries have sped up efforts to promote in-depth cooperation in strategic projects such as energy, aerospace and interconnectivity, tapped into the potential of cooperation among small and medium-sized enterprises (SMEs), and fostered new cooperation areas and growth points.

On the evening of May 14, China’s Kunqu opera, one of the oldest extant forms of Chinese opera, was performed at the Botanic Garden Pharmacy Yard of Moscow State University in Russia. The famous Kunqu opera “the Peony Pavilion” opened the prelude of the Chekhov International Theatre Festival this year.

On May 26, the Chinese Cultural Festival kicked off at the ZIL Cultural Center in Moscow, during which the Russians could taste tea, sing Chinese songs, listen to Chinese folktales, and participate in kung fu and calligraphy courses.

On May 28, the Russian State Duma, or the lower house of parliament, held an exhibition of Russian and Chinese calligraphy, attracting calligraphers from both countries.

In the past six years, China and Russia have enjoyed higher level of cultural exchanges in broader areas and more diversified forms, and conducted more popular activities with wider influence.

Meanwhile, the two nations have enriched cultural exchanges and bolstered the two peoples’ understanding and interest in each other’s culture, by hosting film festivals in each other’s territory, translating and publishing books, and encouraging interactions between museums, theaters, and the circle of fine arts.

Cultural exchanges between Russia and China can promote their understanding of each other’s history and consolidate their current ties, which will be handed down from generation to generation, said Sergey Gavrilov, Chairman of the Russia-China Parliamentary Friendship Group of the Russian State Duma at exhibition of Chinese and Russian calligraphy works.

The friendship between the two peoples is also rooted in the hearts of young people.

In mid-May this year, teachers from the Ocean All-Russia Children’s Care Center, who had helped children affected by the Wenchuan earthquake 11 years ago, were invited to visit China. Many people who had been treated at the center returned to Chengdu, southwest China’s Sichuan province, to greet the kindhearted teachers. They have grown up, but their true feelings and the story of love continue.

On May 27, Russia’s Unified State Exam started. It is a national exam that every student must pass after high school to enter a university or a professional college. This year, Mandarin was included in the Unified State Exam, and reports confirmed that nearly 300 students from 43 federal subjects in Russia applied for the Mandarin test in their exam.

Concordia Kurilova, former Russian rector of the Confucius Institute at Far Eastern Federal University in Russia, has long been devoted herself to promoting educational cooperation and enhancing friendship between China and Russia. She believes that the unbreakable friendship between the two nations is bound to be handed down from generation to generation.