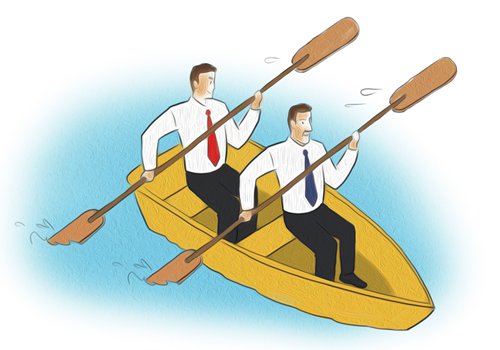 Chinese Vice President Wang Qishan's visit to Russia, his first overseas trip after taking office, signals the primacy Beijing attaches to Moscow in its foreign policy. Wang attended the 22nd St Petersburg International Economic Forum (SPIEF), underscoring the importance of Sino-Russian relations.
As the most important diplomatic event that Russia hosts, the forum has received the attention of leaders of the world's major powers. French President Emmanuel Macron, Japanese Prime Minister Shinzo Abe and leaders of several European countries attended the forum this year. Former Chinese president Hu Jintao also participated in 2011.
This year's forum is particularly important to Russia. It is a window for Russian President Vladimir Putin who recently was re-elected in the fourth term and his new cabinet to announce its economic development strategy to the world.
Putin's new cabinet could be the one with the strongest economic momentum after the disintegration of the Soviet Union. Anton Siluanov, finance minister, is now the first deputy prime minister. Former finance minister Alexei Kudrin has returned to the cabinet. A group of young and middle-aged officials with economics background were promoted to ministerial-level positions. This demonstrates how much importance Putin has given to the country's economic development in his new term in office.
Russia has to consolidate the achievements of economic recovery and prevent domestic production from tanking again. Meanwhile, Putin needs to find a viable and prudent course for the country's development through his six-year term and even after. Revitalizing the economy is the paramount mission of Putin and his administration.
Therefore, Russia will ramp up its foreign economic activity and hence SPIEF becomes more significant. It not only works as a platform for Russia to show the international community its resolve and ideas to restore the economy, but can also provide a multilateral framework for economic cooperation.
Wang's pick of Russia as his first foreign destination since taking office underscores the significance of Sino-Russian relations amid volatile international politics.
When meeting with Putin, Wang emphasized that the understanding and support on major international issues has contributed to safeguarding global strategic stability and building of a new type of international relations and a community of shared future for mankind.
Sino-Russian relations have a strong and durable driving force for sustained development.
First, when facing external pressures, China and Russia strategically have each other's back. Since Donald Trump took office as the US president, neither US-China relations nor US-Russia ties have anything positive to speak about. China and Russia detractors are in majority.
It can be foreseen that China and Russia will suffer from more strategic squeeze from Western countries. So, maintaining strategic coordination is vital for Beijing and Moscow. The strategic value of Sino-Russian relations can never be overemphasized.
Second, there is much room for further economic and trade cooperation between the two countries. Wang revealed at the SPIEF that China-Russia annual trade volume is close to the target of $100 billion, and the total investment in 73 large-scale projects now underway exceeds $100 billion.
The trade volume cannot compare that between China and US, which is more than $580 billion. But Russia's GDP last year was only a fifteenth of the US, which means that Sino-Russian trade is extremely important to Moscow.
Economic cooperation between the two powerful neighboring countries cannot be achieved at one go, just like the boundary disputes between China and Russia. The two have spent four decades trying to find solutions, both politically and legally. Sino-Russian economic and trade relations have left behind the preliminary stages to reach maturity. .
Third, China and Russia have tried their best to avoid hurdles caused by differences. The two major powers also have diverging interests, including inconsistency on the North Korean nuclear issue and the building of Eurasia geopolitical space. However, both sides have handled them in a pragmatic and effective manner. The way they handle ties can be a model for global players.
In his speech at SPIEF, Wang underscored the value of Sino-Russian relations and responded to challenges in the external environment. China and Russia should pay more attention to long-term cooperation so as to boost modernization, which is now the most important issue in Sino-Russian ties.