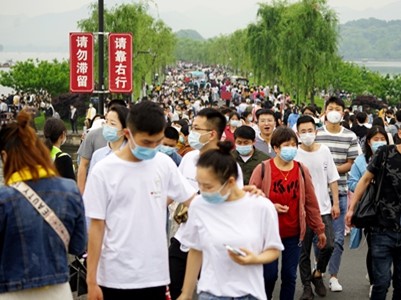 There have been confirmed COVID-19 cases among those working for US President Donald Trump, his daughter Ivanka Trump and Vice President Mike Pence, making it crystal clear that the virus has entered the White House. This is a blow to the confidence of American society to resume work and production. People may worry: If even the White House has turned out like this, how great will the risks be when industrial and commercial institutions resume operations?

Resumption of work and production has become a difficult global challenge. As the US and Europe do not have the capacity to zero out confirmed cases, they face a dilemma between controlling the epidemic and restoring their economies. The resumption of work and production increases the risk of the epidemic spreading, while prolonged economic stagnation leads to unbearable mass unemployment.

Some entertainment venues and companies in South Korea and Germany have been forced to close after their reopening, as their reopening led to a surge in infections. A large meat company in the US state of Iowa opened twice and closed twice due to infection clusters. There are also high-risk areas in China due to clusters, but China's success is due to its quick blockade of new outbreaks.

China has generally put the epidemic under control. China carefully scans every place in the country, and immediately tracks all close contacts wherever there is a new confirmed case. China has gained the initiative.

However, in the US and Europe, when the epidemic has become severe, the governments have strengthened the social blockade. When the spread of the epidemic slows, they resume work and production. The US and Europe are facing higher risks of losing more lives and suffering more economic losses.

But if these two different models continue for one or two years or even longer, the global results will be highly uncertain. Judging from the current situation, it is more likely that the US, based on geopolitical calculations, will incite Western society to further stigmatize and isolate China.

To cope with the complicated situation, China must do the following well. First, China should not be pressured by Western opinion. The US-led West is not qualified to criticize China's performance in the virus fight. Their criticism of China is full of jealousy and self-boasting. China has been far ahead of the US in terms of resumption of work and production. In the next stage, China should try to realize economic growth as a leader among the world's major economies.

Second, China should serve as a global supplier for anti-virus materials. On the one hand, it helps China expand exports and boost employment. On the other hand, it is a test of China's honesty and credibility. China has to and will prove to be a reliable partner for other countries at times of crisis.

Third, China has displayed many advantages in the virus fight and the political confidence of the Chinese society has been greatly boosted. This creates a favorable condition for China's further opening. Chinese society is more capable than ever to undergo complex situations when competing with the West and we can enhance our initiatives in this regard.

Fourth, in the face of US anti-China moves, we must stick to the bottom line of national security and make early preparations. Many of Washington's threats cannot be realized in the short term, as the US cannot function normally for quite a long time. China should not be led by extreme US elites, but deal with them in a calm manner.

Compared to most countries, China has managed to contain the epidemic earlier. This provides a special room for China. China should take advantage of this room to solve problems and improve. Meanwhile, it should counter US attacks on China and strive for the best result, for its own interests, and for the interests of the entire world.