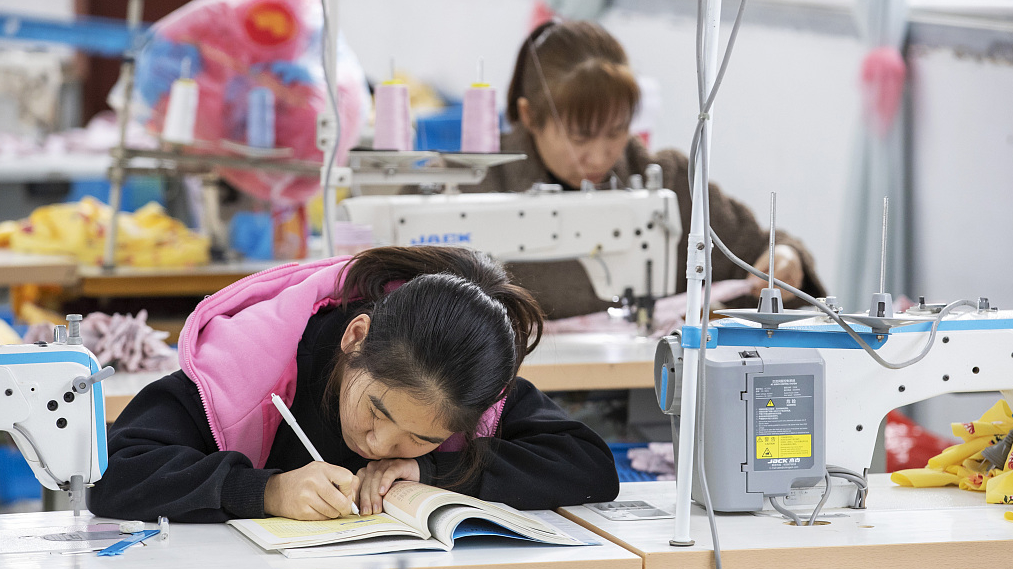 A child is doing homework while her mother is working at a factory created under China's anti-poverty strategy. /VCG Photo

China's anti-poverty strategies has attracted worldwide attention for lifting more than 700 million people out of poverty in three decades. For a nation that constitutes around 20 percent of the world population with merely seven percent of arable land, it is an immense uphill battle to lift each and every person out of poverty.

The Chinese model is largely viewed as exemplary for many developing countries. Targeted poverty alleviation participation by the entire nation is the key in this endeavor. It encompasses the establishment of six sub-systems covering accountability, policy implementation, fund management, mobilization, supervision, and assessment.

The starting point is to identify the true causes behind poverty: curse by nature, family crisis, ignorance or laziness. To this end, the creation of a national registration system for poor households enables local officials to gather data from each household and village.

Sets of measures targeting households and individuals have been reengineered for implementation, rather than indiscriminately pouring resources into a whole region. Massive infrastructure development including highways and telecommunication devices sets the stage for connectivity. The resounding slogan "you have to expand your reach before you get rich" appears on every village's display board.

This unique style of policy is supported by Chinese family culture. Partnerships are formed between more prosperous cities and poor villages. The former has to, with the government mandate, lend a generous hand to the latter. Moreover, all state-owned enterprises and government agencies have to get closely involved.

This is not a charitable handout. The key notion is placed on local capacity building: Teaching them fishing techniques, rather than giving them the fish. In addition to tax transfers from the central government, a poverty-stricken county can rely on the brotherhood-city for loans, infrastructure development, technical support, and market channels for their local produces. This proved highly effective for poor regions to gain experience, access to critical resources, and to connect with the outside world. The number of households lifted out of poverty is set as the key performance indicator for local authorities in order to ensure they are accountable for results. Strict anti-graft measures are deployed against corruption in the entire process of resource allocation.

To avoid slipping back to poverty, the plan arranges the relocation of the poor from disaster-stricken areas to more developed region and from barren land to more fertile grounds. Villagers can translate their land into equity positions in firms investing in their areas. The creation of rural e-commerce centers known as Taobao villages by the Chinese internet giant Alibaba also encourages online sales of farm produce and indigenous goods. Financial institutions are encouraged by preferential policies to extend loans for local entrepreneurship. Local governments are given permission to take bold steps to attract industries. These measures make progress more sustainable than by simply lending out money.

To curb urban poverty, the introduction of the Minimum Standard of Living Scheme helps with supplementing the income of the urban poor and those who don't qualify for other forms of government aid. This policy is set based on regional poverty lines. It gives recipients a sum of money that is different based on their income and the poverty lines.

China aims at completely eradicating poverty by 2020. Beyond that, challenges ahead are still tough. China needs to prevent a recurrence of poverty. This requires more sophisticated strategy in spreading social welfare, medical care, and technical expertise. While modernization of production mode along its urbanization process is key to productivity, heading into the future, social stability coupled with robust mobility can only be addressed in sound governance and solid education.

The secret to the success would lie with the collective bond and sharing under a sense of communitarianism, a rich culture, hard-working mentality, right government system, and good leaders. China has set the standards for the world on how responsible leadership should be and a modern style of communitarianism that works because it has the best of ideas and practices.