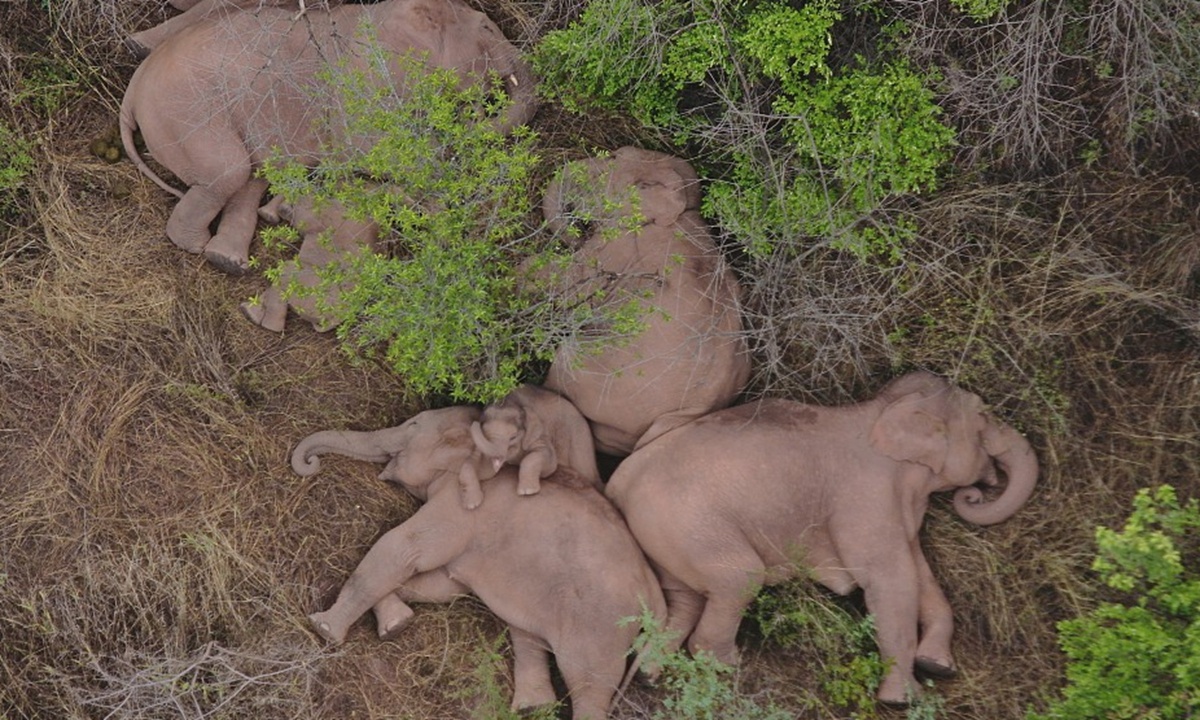 Which animal would you think of first when talking about China? The giant panda used to be a general answer. Yet very recently among global audiences, pandas' thunder may have been stolen by a herd of wandering wild elephants in Southwest China's Yunnan Province.

Since April, these elephants have left their forest home in the Xishuangbanna Dai Autonomous Prefecture and marched northward. They have become social media celebrities ever since. Their stories, be it breaking into villagers' homes, getting high on fermented grains, or huddling together in slumber, are touching hearts around China, and also worldwide. "China's wandering elephants becoming international stars" was a headline by Associated Press on June 8, which noted that, "major global media are chronicling the herd," and "Twitter and YouTube are full of clips of their various antics."

The New York Times captured that, "they have devoured truckloads of corn and pineapples left out by government officials." The Guardian reported they ate whole fields of corn and smashed up barns. To Chinese people's surprise, these Western media outlets showed a 180-degree change compared with their long-standing biased smears and harsh tones. The elephants' stories are probably their most gentle news coverage about China in quite a few years. There is almost no nitpicking or sarcasm, and the majority of the reports are filled with novel, curious, and relaxed tones.

The reason? Maybe because in these episodes, they can hardly find even the lightest trace of the so-called China threat theory.

For some people in the US or Europe, it may be hard to imagine that Chinese people could be so patient and friendly to uninvited wild elephants. Police have evacuated and blocked off several roads to make way for the herd. The government announced to give residents full compensation for any damage caused by the elephants. And people were thrilled to see a baby elephant was born during the migration.

Through the "documentaries" of the 15 elephants, audiences from the globe are seeing how big China is and getting to know that there is a beautiful province called Yunnan. As of press time, the elephants have traveled at least 500 kilometers. Japanese netizens noted that is the distance from Tokyo to Osaka, but in China, the herd are still in the same province they embarked on their journey months ago. In addition, some foreigners now know that metropolises in China are not limited to Beijing, Shanghai and Guangzhou. Kunming, the capital city of Yunnan, which has weather like spring all year around, is also one.

People have seen China's love and passion for animals and tourists. Even if they have wreaked havoc in over 50 hectares of farmland, no one drove them away. People even offered piles of pineapples, bananas and corn to treat them, some food was used to divert them to safer areas. People even discovered that the elephants like corn over pineapples. When Chinese police encountered foreign journalists, they greeted the visitors with warm hellos and asked with smiles, "Are you here to see the elephants?"

Moreover, people have vividly noticed China's technological strength. To protect the elephants, Yunnan, a border province of China, sent a task force of 360 people with 76 cars and nine drones to track their routes.

It seems that the unexpected expedition of the wild animals has accidentally become a cool business card of China. They have indirectly introduced the cities they passed by as well as a real China. Their episodes have mirrored China's long-term relentless efforts to protect the environment and wild animals. The population of wild Asian elephants in Yunnan nearly doubled over the past three decades, according to Xinhua.

China is serious when it comes to environmental and animal protection. When some Western countries still hunt dolphins, try to dump nuclear wastewater into the sea, refuse to sign the Kyoto Protocol or withdraw from the Paris Agreement, China is quietly yet unswervingly sticking to its environmentally friendly development vision. When the same thing happens in India, some local residents have hurled firebombs at elephants. But this is definitely not the case in China.

After witnessing this, the West may have finally lost their sense of superiority when portraying China, at least in terms of the elephants. Since the outbreak of the pandemic, the image of China has too many times been distorted in the West's descriptions. But this time, thanks to the elephants, an image of a real and caring China is emerging - and no one can fake or twist the truth.

The migration is not over, and the elephants' amusing stories will continue. So will Chinese people's attention and protection for them. Meanwhile, some Chinese say we should thank the elephants for making the world finally see how adorable China is. And some are inspired by the elephants, saying China should show more of these stories to the world.

The author is a reporter with Global Times. opinion@globaltimes.com.cn