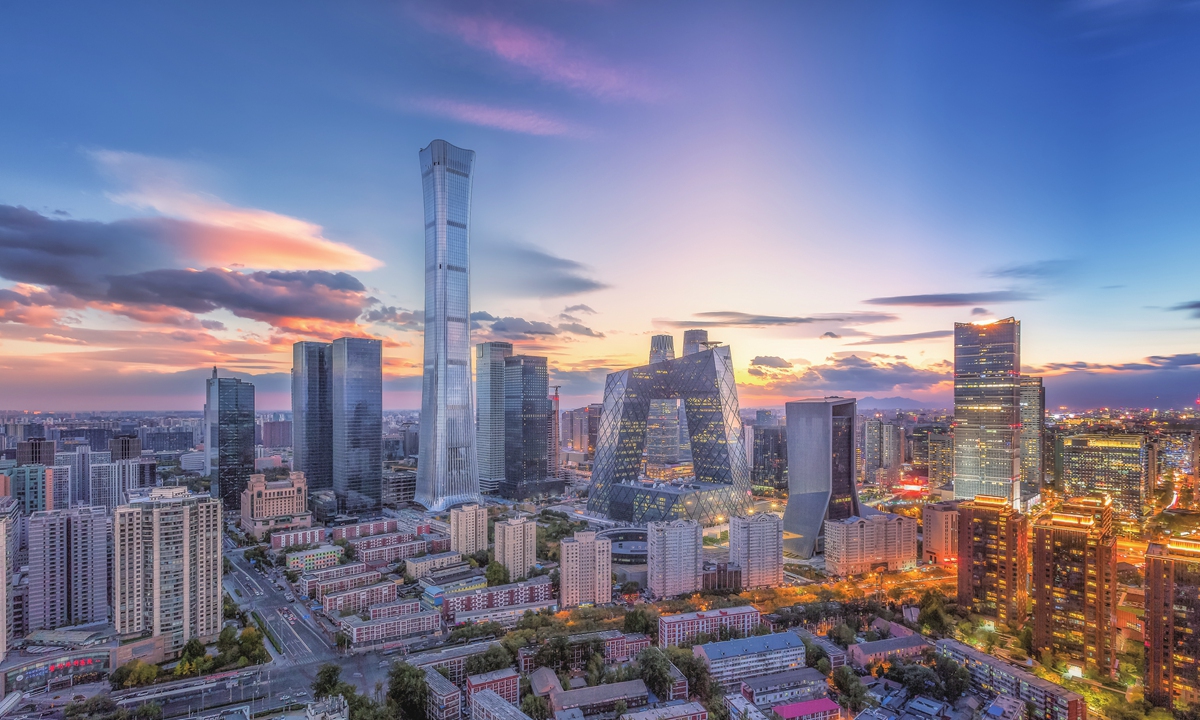 A view of Beijing (Photo: VCG)

China's economy slowed to 0.4 percent growth from April to June due to sudden pandemic induced lockdowns in Shanghai, Changchun and other Chinese cities. So it is imperative to unify national coronavirus prevention and control measures while ramping up efforts to accelerate domestic consumption and urban housing construction and sale during the second half year if the government wants to achieve relatively strong GDP growth for 2022.

Mathematically, China needs to grow by at least 7.8 percent from July to December if the country wants to realize the 5.5 percent growth goal set in March at the annual National People's Congress (NPC) meeting. The majority of economists would deem it very difficult to achieve.

But a growth rate higher than 4.5 percent will continue to make China the true engine of the world, as the US, Europe and other major developed economies suffer from stagflation.

Inspiring news has recently arrived for Chinese policy-makers. Industrial production growth rebounded to 4 percent year-on-year rise in June, from -2.9 percent drop in April and 0.7 percent growth in May. The growth rate for July and August is expected to surpass 6.5 percent. Also, fixed-asset investment saw 5.8 percent year-on-year growth in June, led by a strong recovery in investment on expressways, high-speed railroads, bridges, subways, ports, reservoirs and other infrastructure projects.

Most economists anticipate that the Chinese economy will keep on improving in the third and fourth quarter by up to 6 percent growth, provided the government's incremental stimulus policy buttresses broad domestic consumption, and particularly, propel urban real estate sector growth. And, less disruptive anti-pandemic measures should be observed in all Chinese provinces. Megacities like Beijing, Shanghai, Guangzhou Shenzhen, Chongqing, Suzhou and Hangzhou should keep their high alert to avert widespread virus infections and city-wide lockdowns.

The country's central bank is expected to maintain a relatively loose monetary policy till the end of 2022, making no changes to the benchmark Loan Prime Rate (LPR) or the reserve requirement ratio (RRR) in the coming many months, although other central banks are under pressure to raise rates to curb runaway inflation.

Chinese policy-makers need to ramp up their support to boost urban housing construction and the all-important technology companies, including the internet-based platforms, such as Tencent, JD, Meituan, Didi and Alibaba, in order to maintain vitality of goods and the service economy.

The slump of urban housing construction since 2021 has significantly contributed to the economic slowdown. In the first half of 2022, property sales fell more than 20 percent. Official data shows the property sector value dropped 7 percent year-on-year to 18.6 trillion yuan at the end of June this year.

The economic slowdown has affected the labor market for the nation's young people. According to official data, the youth unemployment rate rose to 19.3 percent in June, despite an improvement in employment for the 25-59 ages group. The pressure on the youth labor market is expected to grow in the second half year as more than 10 million new college graduates are about to enter the job market.

With regard to domestic consumption, the policymakers need to do more to boost households' confidence in their future employment and incomes. Retail sales growth recovered to 3.1 percent year-on-year growth in June, after falling precipitously by 11.3 percent in April and 6.7 percent in May, cause by aftershocks of pandemic lockdowns.

Nevertheless, China's export machine has kept firing on all cylinders, with nominal export growth accelerating to 17.9 percent year-on-year in June, from 16.8 percent in May. China's share of global exports is likely to reach 14.5 percent in 2022 and 15 percent in 2023.

In summary, China's economy, though facing heightened global uncertainty and many headwinds caused by various geopolitical tensions, will speed up in the second half year and is anticipated to stage a significant growth this year which will be envied by the word's other major economies. And, next year could be even rosier.