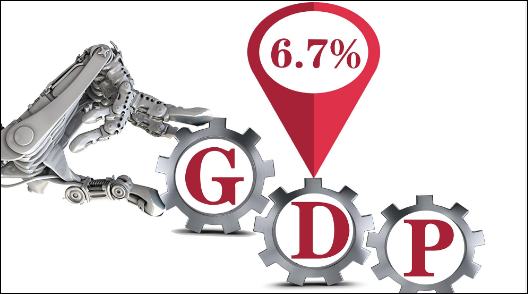 China's GDP growth reached 6.7 percent year-on-year in the first three quarters of this year, according to data released by the National Bureau of Statistics (NBS) on Friday.

Despite Western media's hype that the figure is the lowest since the first quarter of 2009, the pace is in line with market expectations and higher than the government's annual growth target of around 6.5 percent. The economy has grown within a reasonable range and maintained a trend of overall stability and steady progress, according to the statistical authority.

Some Westerners argue that China's growth in the third quarter was 6.5 percent, down from 6.8 percent in the first quarter and 6.7 percent in the second quarter. This, according to them, is a result of the country's bruising trade battle with the US.

Admittedly, the changing international trade environment is exerting some negative effects on China's economic performances. But risks are under effective control. Official data suggests that trade cannot take the blame for the deceleration of China's economic growth. China's exports, amid escalating trade tensions with the US, have been growing robustly in the past three quarters, contributing to a new record trade surplus with the US.

The slip in economic growth is, in fact, a result of China's deleveraging efforts. In the past nine months, China has been dedicated to reducing debts on state-owned enterprises and local governments, which will inevitably affect the country's short-term economic performances.

As China has stepped into the new era, the Chinese government is gradually shifting its focus from the blind pursuit of high-speed growth to the quality of growth, and therefore its slowing pace of 6.7 percent has nothing to make a fuss about.

China, in recent years, has attached more importance to adjusting and upgrading its economic structure. NBS statistics suggest that China's efforts are paying back – the country's software and IT services gained 37.5 percent year-on-year in the January-September period. The growth in the service sector reached 7.7 percent in the past three quarters, picking up from a 7.6 increase in the first half, and outpacing 3.4 percent in primary industry and 5.8 percent in secondary industry.

Apparently, China's economic focus is gradually turning from cheap-labor manufacturing to high-tech service sector. With heavy investments in research and human capital, China is playing an increasingly significant role in artificial intelligence, big data, and other Internet-related industries. The country is now a world leader, instead of a follower, in these fields.

In the fourth quarter, China's economy will continue its steady growth. However, escalated trade battle, as well as changing international trade environment, means that the country will face more external challenges and rising downward pressure next year, for which the Chinese government should make full preparations. How to instill more impetus to its economy is a priority for the government at the current stage.