Sierra Leone’s former President Ernest Bai Koroma  uncovers gauze for a patient who has just received a cataract surgery. Koroma visited the Hospital Ship of Chinese People's Liberation Army (PLA) Navy, Peace Ark, on September 25th, 2017. He spoke highly of the free medical services the hospital ship offered to the people of Sierra Leone, and extended his thanks to the medical staff onboard. (Photos: People’s Daily Online)

It helps the recipient countries reduce poverty and improve livelihood, effectively promoting the economic and social development of these countries.

It has also made huge contribution to narrowing the North-South gap, enhancing South-South cooperation, and building a community with a shared future for mankind, establishing an image of a responsible major country.

During the assistance, China has always adhered to the philosophy of equality, mutual trust, and win-win cooperation, and innovated ways of assistance, offering benefits to the independent development of the developing countries.

However, China is still tarnished by some people in western countries who made groundless accusation that the country’s assistance has brought debt trap to the recipient countries. They even relate China’s assistance to the so-called “neo-colonialism”.

In this regard, China must make a clear stand, and explain what it has done in its foreign assistance. 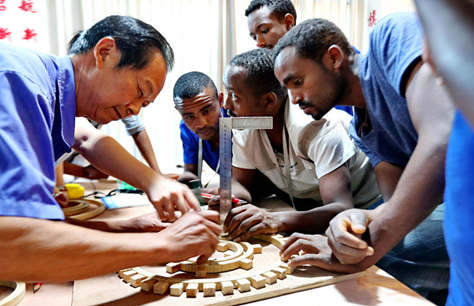 Foreign assistance is a due responsibility and obligation of developed countries, and the UN has made explicit requirement about it in relevant documents.

The UN requested that developed countries should donate 0.7 percent of their national income to assist developing countries, an important index to assess the foreign aid of each country.

However, most of the developed countries among the 28 members of the Development Assistance Committee under the Organization for Economic Co-operation and Development failed to reach the standard.

China’s foreign aid does not go beyond the framework of South-South Cooperation, and it is mutual help between developing countries. China attaches no political string to its foreign assistance, and always respects the willingness and demand of the recipient countries.

It sticks to equal consultation and does not export the Chinese model of development, focusing on the economic and social development of the local community. That is the fundamental difference between the foreign aid models of China and western countries.

The country also attaches great importance on infrastructure construction, and has built a large number of livelihood projects in the recipient countries. These projects contributed to poverty reduction of the local community, and also enhanced the sense of gain for local people.

China’s foreign aid is gradually growing larger with increasing influence. The scale and level of the foreign assistance that China offers are in accord with the country’s development, and the country is not over-assisting.

China’s foreign aid is not only unilateral effort, as mutual benefit and win-win results possess an important position. By offering support in infrastructure and productive projects to the recipient countries, China is also creating opportunities for its enterprises to go global.

For instance, China has become Africa’s largest trading partner since 2009. It indicates that through foreign aid, China and the recipient countries have achieved win-win results and common development.

The aid from western countries to developing countries often have economic and political strings attached, which has added burden to the recipients, both in history and at present.

On the contrary, China, by expanding cooperation and actively promoting the social and economic development of the developing countries, can enhance their capability to pay the debts.

Facts speak louder than words. China’s efforts are well recognized by a number of developing countries. To improve the livelihood of various countries is not only China’s responsibility as a major developing country, but also a wish of the Chinese people.

(The author, Wang Heng is deputy director and professor of the Institute of African Studies, Zhejiang Normal University)