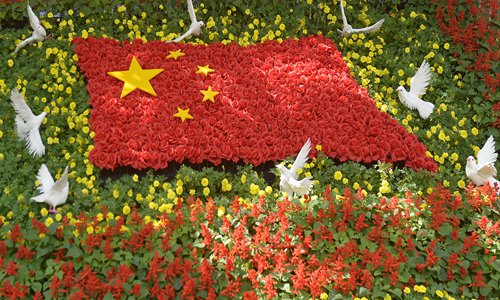 I am a very ordinary Chinese. Although I am the editor-in-chief of a market-oriented newspaper, I am not an "official," but a workman who writes articles and produces a bunch of audio-video products every day. Colleagues know that I am a typical manual worker who often struggles to read the manuscript when tired after doing the last audio in the middle of the night.My relatives are all in China, and there is no penny that is deposited abroad. My interests, like everyone else's, are in China. I sincerely hope China can grow stronger, maintain stability and the economy can keep developing continuously.When I was young, the round of ideological enlightenment shaped my admiration for Western culture. I have been deeply influenced by the great works of the European enlightenment thinkers, the inspiring words of American thinkers and their rational analysis.At that time, I used to think that I could never see the good days of the Chinese people. I still remember an article I read when I was a graduate student. It said the gap between China and developed countries was widening, and I was really frustrated.The top student in my high school went to the US in the 1980s. The No.1 student of the school adjacent to mine went to Japan. I admired them, but I was not so capable as them. I had to live in this country, I thought then. I got married in 1985, and the only appliance in my house then was a light bulb. Then somehow the country changed little by little. When I went abroad in 1993, Beijing only had the Second Ring Road. When I came back, it had the Third Ring Road. I began to drive a car in 1999 and soon Beijing had the Fourth Ring Road. I was looking forward to Beijing having the Fifth Ring Road, soon it had it, and then the Sixth Ring Road...The Communist Party of China has created a huge economic miracle by organizing the disorganized Chinese in ways that are not mainstream in today's world. When I was 30 years old, I worked as an editor in People's Daily. At that time, my expectation from life was that I could work as a correspondent abroad and bring some big items back with me when I returned home. Who would have thought that the average Chinese today could not only have a house, a car, but could also travel, go abroad, stay in a hotel at their expense, and live the kind of life that was once shown in foreign movies?Our life is better, but we got into big trouble: The US, the world's leading power, has frowned upon China's rise. Yes, China is developing so fast. When China opened up its economy, we were at the same development level as India. Forty years later, China's GDP is five times that of India. If China is to develop like this for another 20 to 30 years, it will really be the first in the world. Americans cannot accept it. And so, there is a trade war that goes well beyond what a trade war can be today. What can we do? Is this the fault of the Chinese people living a good life? We all bought color television sets and refrigerators, and China's GDP equaled that of Italy. We all needed to have houses and cars, so China's GDP became the second largest in the world. Next, we all need good healthcare, good education, good retirement, good vacations, safe food and social security, and blue sky again. In the process, China will become the world's largest economy. The core requirement of the US is: You stop this. This is not the life you Chinese should live. We are faced with two difficult choices: Listen to the US, nix the development model and do away with national rejuvenation achieved so far, withdraw from the gradual competition with the US in economy, science and technology, or thwart US pressure and defend China's right to continue to develop in the way it chooses. My proposition is that everyone unite and firmly support the government in not being afraid to face a fight. We have to fight for the right to equally compete with the US. I believe that while doing so may be difficult in the near term, today's effort will buy us more space in the long run.We must all see that today's Chinese government is really fighting the US for the interests of the Chinese nation and the right of the Chinese people to continue to improve their lives. There are plenty of demagogues who want to make important concessions, selfishly seeking political opportunities when the country is going through difficulties. They are too easily manipulated by American power, and they are naive, if not malicious.There is no reason for the Chinese government to do anything detrimental to the country and its people in the process of negotiations and standoff with the US. If the Party and the central government collapse, China will fall apart and the US will be able to break China up and turn all the local governments in the country into pro-American regimes. This is what Washington wants. We hope the government will explain all this clearly to the people. China's ability to unite and persevere will determine the future of this country and of all of us.