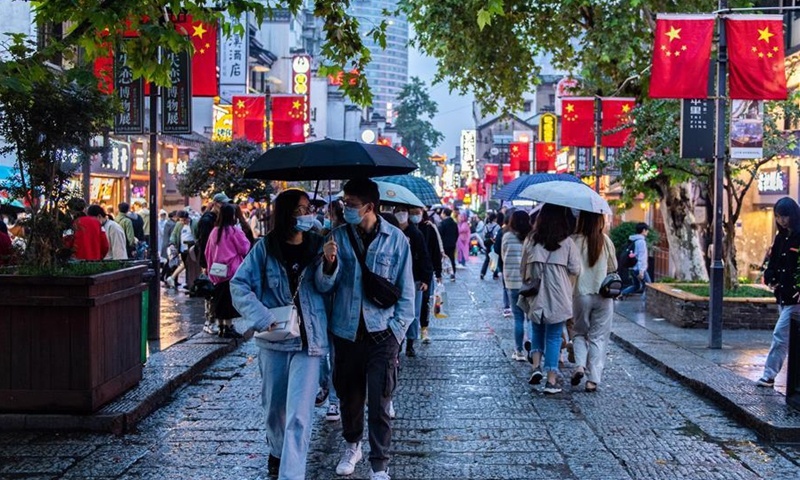 The week-long National Day holiday is nearing its end, and China has witnessed the world's most robust recovery of tourism and home consumption since the COVID-19 outbreak. Although the current holiday performance hasn't reached the height of past long holidays, it is still envied by other major economies, and has amazed the whole world. It is believed the majority of Chinese people feel content to have such a lively and relaxing vacation.

While we enjoy the holiday, some other parts of the world are going through shocks one after another. Nothing can better verify the severity of the COVID-19 pandemic than US President Donald Trump testing positive for the coronavirus. The health crisis still poses the most serious challenge for many countries. 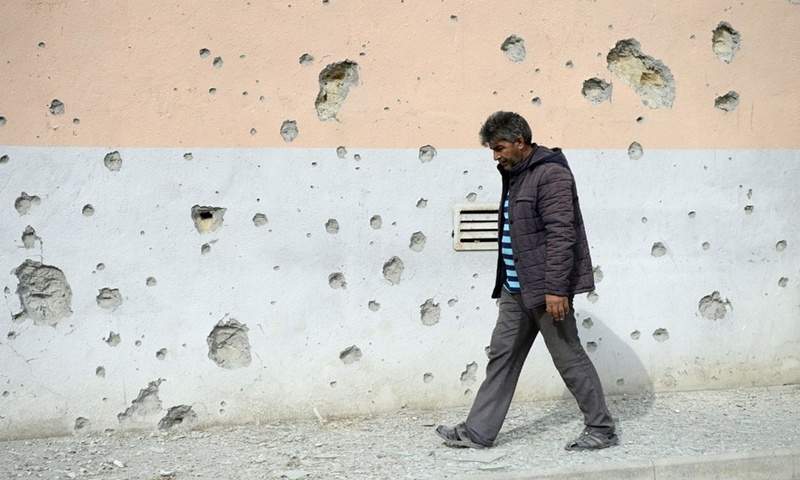 A man walking by a house damaged during clashes in the Tartar district bordering the Nagorno-Karabakh region, September 29, 2020. (Photo:Xinhua)

Besides, the armed conflicts in Nagorno-Karabakh, the Transcaucasian region, have intensified, causing rising casualties. Moreover, China's neighbor Kyrgyzstan has suddenly fallen into a large-scale political turmoil caused by controversies around the country's parliamentary election in the past two days. Opposition protesters even took control of the government buildings housing the country's parliament and presidential administration, known as the White House.

The Soviet Union has been defunct for almost 30 years, but till today some of its former members have not found a new and viable path, or rid themselves of territorial disputes caused by historical disintegration. Countless people's lives have been affected. How many 30 years could one people have in his or her life!

Order seems to be fragile in human society. Turbulence seems to be always ready to dominate our lives at any time. China is developing amid changes, with its external strategic environment full of anxiety and uneasiness. China has provided a relatively stable order for its people in the midst of all complexities both at home and abroad. This is not easy and worth cherishing by all Chinese people.

The US has lost more than 200,000 lives due to COVID-19 pandemic. Europe is facing a severe rebound in coronavirus infections with many public places being forced to close again. Nagorno-Karabakh and Kyrgyzstan are going through bloody clashes and disorder. The total population of all the above-mentioned countries and regions is not as large as that of China.

Many people imagine that China may face the same fate as the Soviet Union. China is actually confronting many traps and must thus be cautious in every aspect, to avoid falling into certain super tragedy. India, as a populous country, is surpassing the US to become the country with the highest number of coronavirus cases. It might become the new epicenter.

The People's Republic of China has made great achievements, which has allowed all of us to stride upward from a low starting point. I understand that many people are not satisfied, hoping the country could make progress in a faster, more thorough way. But be it a person or a society, no one can choose the starting point. We could only choose the relative speed of progress.

I have 60 years of life experience and have traveled to many countries. The most profound insight I gained is that no county is perfect. Some countries have a large stock of wealth and advantages, but they stopped developing and even started to decline. Some countries are developing rapidly yet they are still at a disadvantageous position for starting late. Every country has its own difficulties.

China has its own puzzles. But today's China has formed some apparent relative advantages. After decades of development, our economic and social development far outweighs our position when we started to develop. Meanwhile, China has been keeping huge potential for sustaining progress. These have constituted two advantages. Over the past three years that the US has turned hostile against China, China's development momentum and ability to solve problems haven't waned. The COVID-19 pandemic has posed a test to the comprehensive capabilities of countries and regions, and the result is obvious to all.

Therefore, I understand some Chinese people have certain dissatisfactions, but I don't understand why some people resist and badmouth our country as a whole. They are often knowledgeable, but the arguments they make are vague and naïve. Some of their arguments are illusions made when they look up the West from a low point; some stem from Western anti-China forces' lame clichés about China. I think these people have deviated from the facts and fallen into serious subjectivism. They are making mistakes that they would find unbearable to look back on some years later.