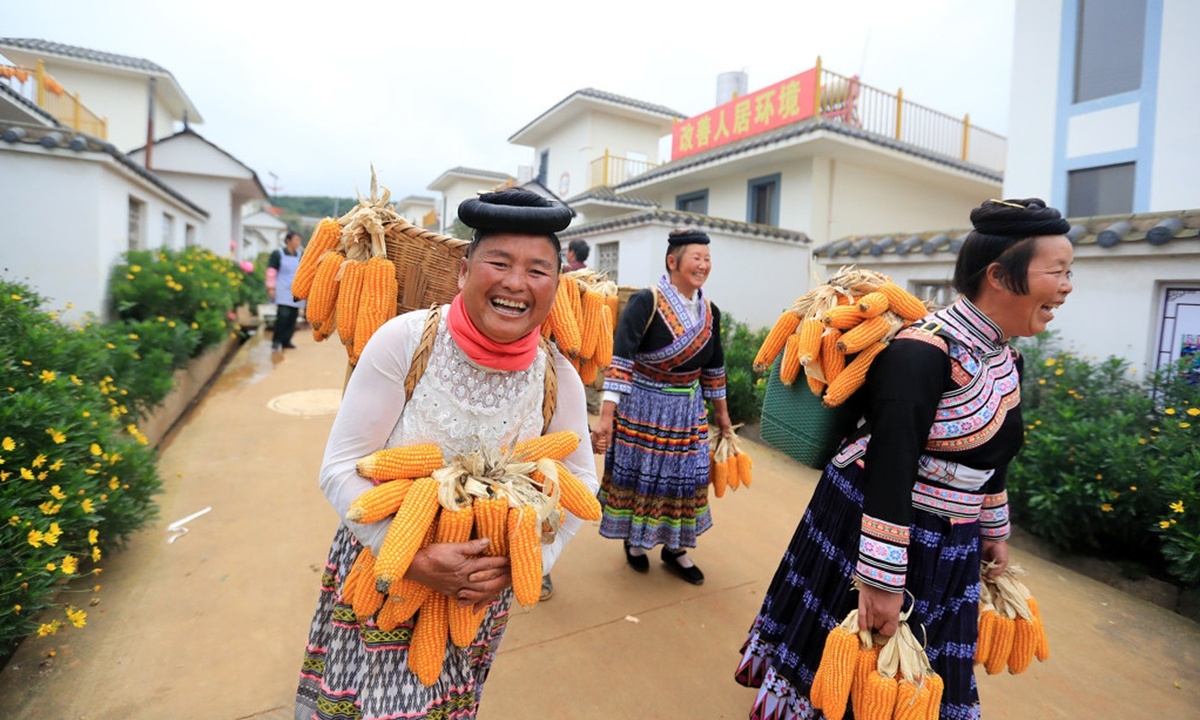 At the historical moment of the centenary of the founding of the Communist Party of China (CPC), an important declaration was made: China's battle against poverty had achieved an ultimate triumph.

This was the bottom-line task set by the CPC Central Committee to complete the building of a moderately prosperous society. China's poverty-alleviation battle has realized the dream of the nation to shake off crippling poverty since the beginning of Chinese history. This has created a miracle in the history of human poverty alleviation.

The historic achievement of China's poverty alleviation is an important milestone in the well-rounded development of China's human-rights causes under the guidance of Xi Jinping Thought on Socialism with Chinese Characteristics for a New Era.

China's achievement in poverty alleviation demonstrates the success of the development concept that puts people first. Reform is for the people. Reform relies on the people. And the fruits of reform are shared by the people. In the process of development, China has effectively safeguarded the fundamental interests of the greatest possible majority of its people, respected the value and dignity of humans, and promoted well-rounded human development.

The Constitution of the CPC clearly states that the Party, "represents… the fundamental interests of the greatest possible majority of the Chinese people." It is also stated that, "the Party must… gradually eliminate poverty, achieve common prosperity." According to Xi's report delivered at the 19th National Congress of the CPC, the principal contradiction facing Chinese society in the new era is that between unbalanced and inadequate development and the people's ever-growing needs for a better life. The CPC must therefore continue the commitment to its people-centered philosophy of development. It must work to promote well-rounded human development and common prosperity for everyone.

Both the CPC and the Chinese government work for the happiness of their people. They think what the people think. They sense the urgency of the people. They always keep the needs of the people in mind. People, including ethnic minorities, women, children, the elderly and the disabled, are given special attention and protection in the planning of China's national economic and social development.

The founding of the CPC has become a major turning point in the history of the development of the Chinese nation. After the founding of the People's Republic of China (PRC), especially since the reform and opening-up era, China has continued to declare war on poverty. Now, it has historically eliminated absolute poverty and overall regional poverty. The country has truly put into practice the principle and spirit of, "no one will be left behind [on the path of development]," as proposed in the United Nations' 2030 Agenda for Sustainable Development.

Moreover, China's achievement in poverty alleviation shows the success of the socialist human rights concept with Chinese characteristics. This regards the rights to survival and development as primary human rights. Before the PRC was founded in 1949, China used to be poor and weak. The founding of the PRC has made Chinese people rise onto their own feet. Reform and opening-up and the building of a moderately prosperous society have allowed Chinese people to gradually become wealthy.

As a developing country with a large population, China regards the rights to survival and development as primary human rights. This is China's scientific judgment based on specific national conditions. It is the essential requirement of socialism to eliminate poverty, focus on people's livelihood, and achieve common prosperity. The CPC has led Chinese people through arduous efforts, achieving a breakthroughs in the protection of rights to survival and development, and further promoting these rights.

China's achievement in poverty alleviation is a success in comprehensively promoting the development of human rights. It is not only a result concerning people's livelihood, but also a social process with rich connotations. China's poverty alleviation work is a systematic project combining policy and law. It mobilizes the whole society to focus on capacity building and long-term development. The success of poverty alleviation is a process of consolidating the foundation of grassroots governance and achieving good governance. In urban and rural areas, there is the popularization of education and technological achievements, the advancement of democracy at grassroots, and the public participation in social policies. The success of poverty alleviation was not achieved overnight. It took long-term efforts to promote economic development, social progress and milestone achievements in human rights.

China's achievements in poverty alleviation demonstrate that the nation's human rights cause is advancing in a pragmatic way. China includes the line "respecting and protecting human rights" into its Constitution and the Constitution of the CPC. The CPC and the Chinese government focus to provide economic and social pillars. China's culture highlights a collective spirit. China does not talk about human rights in an abstract way, but instead places the concept into particular historical phases. It bases the development and practices of human rights on actual national conditions. China's poverty alleviation efforts are based on economic development and social progress. They take the people's happy lives and satisfaction as measurements in a bid to lift people's sense of happiness and deliver them tangible gains and security.

Therefore, the experience China has gained is not only China's but also the world's. Compared with certain Western countries which politicize human rights issues and launch political confrontations, China instead advocates cooperation in the human rights sector based on equality and mutual respect. China's advocacy and actions are more welcomed by the international community, especially by developing countries. China's success with poverty alleviation is a model for human rights around the world.

The author is director of the Center for Human Rights Studies, Chinese Academy of Social Sciences (CASS). The author is also a guest research fellow at the Research Center of Xi Jinping Thought on Socialism with Chinese Characteristics for a New Era under CASS.