China's new five-year plan is providing certainty to the pandemic-hit world apart from boding well for the country's economic and social development, said analysts and academics.

"The ability of Chinese leadership to set realistic and achievable development agendas is one of the salient features of Chinese governance model," said Ahmed Quraishi, senior research fellow at Project Pakistan 21, an independent research organization in Islamabad.

"It's reassuring for both Chinese citizens, friendly neighbors, and international investors."

Guidelines for the 14th Five-Year Plan (2021-25) of economic and social development are included in a communique released on Oct 29 after the four-day Fifth Plenary Session of the 19th Communist Party of China Central Committee in Beijing.

The focus rests on a holistic approach to high quality growth, innovating in science on technology, uplifting of people's livelihood, and building a new development pattern of "dual circulation" which stresses domestic market as the mainstay to be complemented with international markets.

"It was China's stable development which successfully eliminated (absolute) poverty from the country. Also, it benefits the world."

The objectives for 2035 represent an ambitious jump but totally realistic and within reach, he added 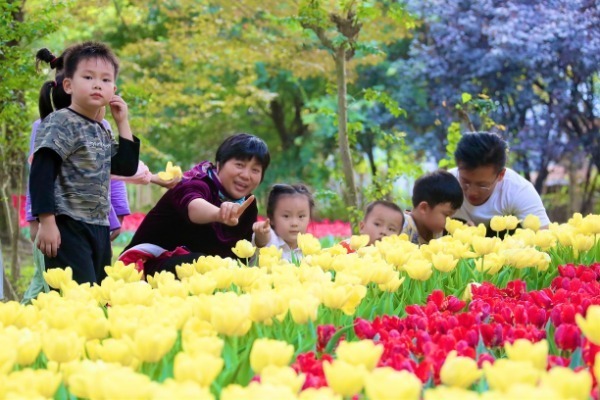 Tourists visit the tulip show held during the National Day holiday on the Chongming Island in Shanghai. [Photo provided to China Daily]

"Being able to put a focus on developing the domestic market also means that China has realized its goal of developing a xiaokang society," said Saraswati. "Without achieving xiaokang, there will not be a strong domestic market." Xiaokang refers to a moderately prosperous society.

"'Dual circulation' is a great development strategy and I think it will be a successful one," said Saraswati, adding that the 14th Five-Year Plan has set an example for the rest of the world in terms of devising development and economic policies.

Noting China is a key player in the global value chain and an important economic partner for Southeast Asian countries, Saraswati said the economic recovery of China in the post-pandemic era will have a great impact on regional economies.

Academics noted the Five-Year Plan model has been instrumental in progress of China since 1953, when Chinese great leadership unveiled the first five-year plan. Since then, the Party never looked back, rather, worked smartly and with enthusiasm to make China the world's second biggest economy after the United States.

"China's five-year planning mechanism has been ensuring the country's gradual and concrete steps toward its goal of modernization, providing predictable opportunities to the world. The goals set in the 14th Five-Year Plan are doable given the track record of China's economic growth," Mohammad Ahmed said.

Highlighting China's achievement during the 13th Five-Year Plan period from 2016 to 2020, Ahmed said the 13th plan has been about making China a "moderately prosperous society" and China "has accomplished the goal despite the pandemic of COVID-19".

"China is a 'moderately prosperous' country now. Chinese leadership has achieved it by reducing its reliance on exports for economic growth and ensuring that growth is sustainable," he said. "Now that goals for next five years have been set, no one can stop China becoming world's biggest economy."

"The way China has brought its people out of poverty is an example for world. The CPC deserves appreciation for this remarkable job," Ahsan Iqbal, former federal minister of planning of Pakistan, said.

It is believed that the Chinese leadership has been steadfast in approaching major issues concerning China's development from a long-term, strategic and systematic perspective.

"Socialist state or not, the Chinese consideration of helping its own people to benefit from the national success is what the US could not do over the last three decades," he said over telephone.

Naveed noted the 14th Five-Year Plan will lead to greater innovation and ownership besides strengthening public confidence in the state too. Moreover, the more China integrates technological growth of Belt and Road Initiative partners, the better it would be for its own economic and geo-political ambitions.

He was hoping that China goes beyond infrastructure development in states involved in BRI and moves onto technological upscaling and capacity-building.

Moreover, accelerating green and low-carbon development is also a key goal that will be meeting UN climate change targets.