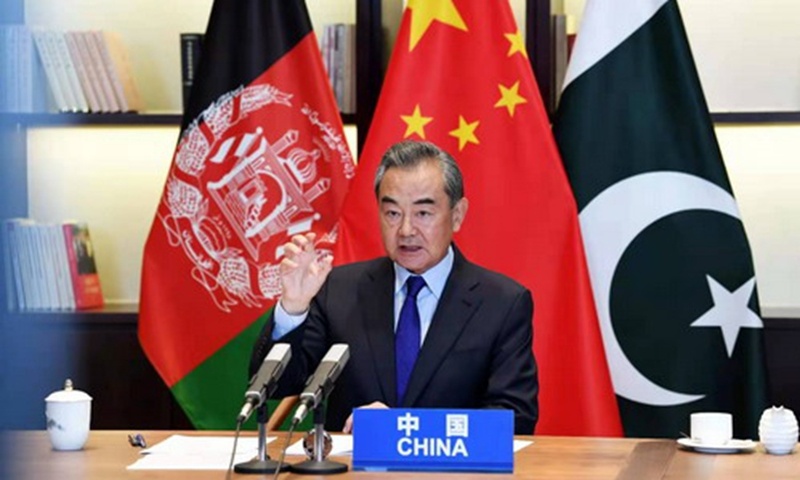 China has always been following the principle of non-interference in others' internal affairs. This has and will not change. Yet a new trend in China's innovative diplomacy based on the principle is emerging - constructive engagement on hot spot issues in China's neighboring countries.

A vivid practice of this can be found in China's propositions raised during the 4th China-Afghanistan-Pakistan Trilateral Foreign Ministers' Dialogue in Guiyang, capital of Southwest China's Guizhou Province, which was held on Thursday.

China's proposals, initiatives and the perspective of advancing peace and reconciliation in Afghanistan sits in stark contrast with US' interference foreign policy.

In Thursday's meeting, Chinese State Councilor and Foreign Minister Wang Yi put forward five ideas and propositions. First, China adheres to the fundamental "Afghan-led, Afghan-owned" principle, stressing that Afghanistan belongs to the Afghan people. This is the manifestation which mirrors China's tradition of respecting other countries' sovereignty, the prerequisite for China's engagement seeking resolutions to resolving other countries' difficulties.

Unlike the US, which has been intervening in Afghan issues mainly through military means, China has been calling for all relevant parties to put the interests of Afghanistan and its people first and jointly explore a governance model and development path that suits the national conditions of the country.

The US tactics have been a combination of pressing the Afghan government while launching strikes against the Taliban, forcing the two sides back to the negotiating table. Unfortunately, such a method turns a blind eye to the interests of Afghanistan and the people there.

Second, Wang said China wants to maintain the momentum of intra-Afghan talks, it is willing to hold an intra-Afghan political dialogue at an appropriate time and will provide all conveniences and support for this. It shows China is willing to offer Afghanistan a platform to help realize a suitable road map and timetable for national reconciliation.

Yet on the other hand, the US, which did little to promote peace talks, has been disrupting the process. For example, it is alleged to have violated the Doha agreement regarding not only airstrikes against the Taliban but also extended US military presence in Afghanistan.

Third, China raised the idea of bringing the Taliban back into the political mainstream. It hopes that the Afghan government will put forward a more attractive plan for peace talks to encourage the Taliban to abandon past differences and meet each other halfway. This may influence the country's future political framework. The proposal conveys the message that China does not want to see a resurgence of the Islamic Emirate of Afghanistan, but hopes the country will pursue a moderate Muslim policy and continue to firmly combat terrorism.

Fourth, China attaches great importance to collective security. It sees the region as a whole. It realizes that Pakistan has played a unique role in facilitating the signing of the peace agreement between the US and the Taliban and the initiation of intra-Afghan negotiations.

China hopes that Pakistan will continue to make good use of its advantages and make new constructive efforts. Not too long ago, China hosted the "China + Central Asia" Foreign Ministers Meeting, which encouraged all parties to release a joint statement on the Afghanistan Issue.

This time, Wang noted that China will support the Shanghai Cooperation Organization playing a bigger role in national reconciliation in Afghanistan. This is a major difference from the way of the US, which not only points its own finger at regional issues from time to time, but also has brought the NATO in, a bloc far away from Afghanistan, into the struggle. Such a manner won't help resolve the Afghan conundrum.

Most importantly, China has grasped the root cause of the issue. One major cause for the 40 years of wars in Afghanistan is its poor economic backdrop. The poor living condition for its people is one of the vital reasons the country has become a hotbed of extremism.

Wang proposed that China should expand cooperation under the China-Pakistan Economic Corridor to Afghanistan to raise the level of economic and trade cooperation and connectivity between Afghanistan and the countries in the region, helping Afghanistan enhance its capacity for independent development and gradually realize a virtuous circle of peace and development. This may turn out to be the beginning of a benign circle.

Compared with US policy in Afghanistan, which is mostly about piling political pressure or carrying out interference militarily, China is hoping to lay a foundation for Afghanistan's long-term peace and security. This is China's plan for its engagement in global governance. It not only focuses on symptoms of regional challenges, but also the root causes.

As a major responsible country, China will continue its innovative practices, engaging regional issues constructively. It will make more contributions based on win-win situations, instead of a US zero-sum game.