After the Political Bureau of the Communist Party of China Central Committee held a meeting on Tuesday to set the tone for the economic work for 2023 and proposed to better coordinate COVID-19 epidemic prevention and control with economic and social development, the Joint Prevention and Control Mechanism of the State Council announced on Wednesday 10 prevention and control measures to further optimize COVID-19 response. This was widely recognized by the public. These new measures include lifting COVID testing and health code requirements for domestic cross-regional travelers and scrapping negative nucleic acid results and health code requirements for entering public places except for designated locations such as nursing homes, medical institutions and schools. They also clarify that asymptomatic carriers and mild COVID-19 patients are allowed to quarantine at home. Once again, China’s epidemic prevention and control work has again taken an important step toward precision and science. 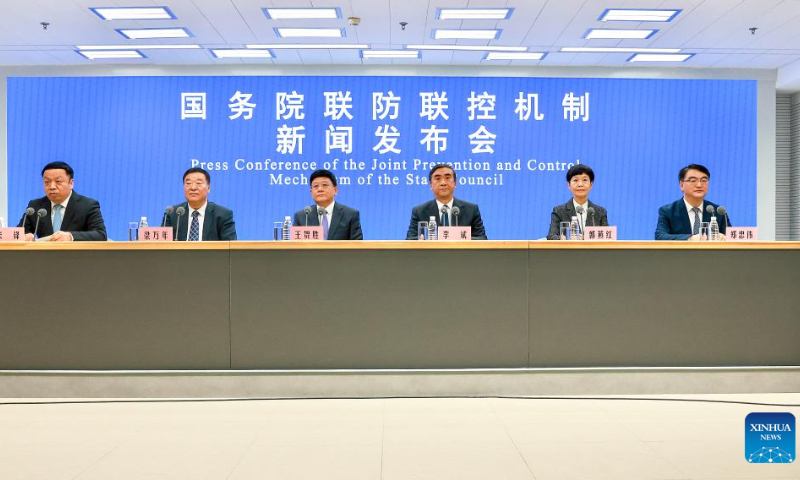 A press conference of the Joint Prevention and Control Mechanism of the State Council is held in Beijing, capital of China, Dec. 7, 2022. (Photo: Xinhua）

We can say that we have come through the most difficult times. Nearly three years of an exceptionally difficult “national fight against the epidemic,” countless people have made sacrifices, endured hardships and paid an effort to win this battle. From the Alpha to Omicron variant, in these three years, we were forced to fight the “war to protect Wuhan” at one point. But step by step, today we can take the strategic initiative against the virus. We have ushered in a time for adjustment where the virus becomes weaker, but we grow stronger.

Looking back when the virus was at the most aggressive stage, China built a strong defense line against the virus again and again, becoming the country with the lowest number of COVID-19 cases and deaths among the world’s major powers. A report from the US Centers for Disease Control and Prevention shows that life expectancy at birth for the total US population was 78.8 years in 2019. It reduced to 77 years in 2020 and further to 76.1 years in 2021. In contrast, despite the large gap between China’s average level of medical resources and technology compared to developed countries, we have achieved a steady increase in average life expectancy, reaching 77.93 years in 2020 and increasing to 78.2 years in 2021. In the past two days, a large number of netizens have left messages to thank the country from the heart for three years of protection.

From a global perspective, China’s contribution to the world during the epidemic is also unparalleled. In 2020, China became the world’s first major economy to achieve positive economic growth. In 2021, China’s economy exceeded 110 trillion yuan ($17.3 trillion), with an average growth rate of 5.1 percent over the previous two years. In 2022, the Chinese economy has withstood pressure and is progressing stably. As China has effectively controlled the spread of the epidemic, the country’s manufacturing industry has not been greatly affected. Made-in-China products continue to dominate globally, and China’s strong supply capacity has significantly stabilized the fragile global supply chain. Meanwhile, China has also selflessly provided anti-epidemic supplies, including vaccines, to a vast number of developing countries, which has strongly supported the global joint efforts to fight against the epidemic. The international community is watching all of this.

China is a large country with a population of over 1.4 billion. Such a population base determines that the course of this enormous ship must be very stable, and a slight deviation may cause irreparable and heavy losses.

In the past three years, China has issued nine versions of epidemic prevention and control plans and diagnosis and treatment plans. Each revision reflects the country’s pragmatic attitude of seeking truth from facts and being proactive and prudent. It keeps progressing by taking small steps, with the starting point of being “people-centered.” China’s prevention and control policy has constantly been adjusted in the past three years, but its logic and original intention have never changed.

Our ability and confidence to fight the epidemic have also been strengthened during the process. Ability is the foundation of confidence, and confidence is the source which inspires ability. The virulence of the Omicron variant is greatly weakened. We have effective technologies and drugs for diagnosis and treatment, and our capabilities, such as medical treatment, pathogen detection and epidemiological investigation, continue to improve. The complete vaccination rate of the whole population exceeds 90 percent. All these give us the confidence to face the virus directly and lay a solid foundation for further optimizing the epidemic prevention and control measures.

For the next step, we still need to make persistent efforts on how to implement the new 10 measures, concentrate resources to protect vulnerable groups in society, and obtain the optimal solution for coordinating epidemic prevention and control and economic development, so that this huge society can continue to move forward adapting to the new situation.

The rainbow comes after the storm. We have all expected a long time for this day to come out of the haze of the epidemic. To be more precise, every step we have taken in the past three years, no matter how difficult it is, is a step closer to this day or a preparation for this day. They are all meaningful.