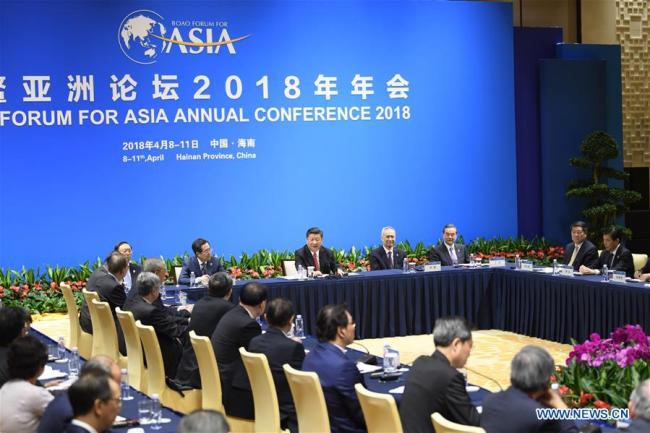 On April 10, the speech by President Xi Jinping at the annual Boao Forum for Asia caught the attention of the international community. Many things were in that speech, but the part that caught the most attention was the announcement of concrete steps to be taken by China to open its doors wider to foreign products, services, and investment.

The steps President Xi announced could be summaries in four aspect：

II.Allow more foreign services and investment in China’s market by significantly raising foreign equity caps in the banking, securities, and insurance industries; ease restrictions on the establishment of foreign financial institutions in China and the expansion of the scope of their business; open up more areas of cooperation between Chinese and foreign financial markets; and raise the foreign equity cap in the automotive sector.

III.Further strengthen the protection of intellectual property rights by stepping up law enforcement, raising the cost of offending, and unlocking the deterrent effect of relevant laws. To help achieve these objectives, China is reinstituting the State Intellectual Property Office this year.

IV. Improve its investment environment by completing the revision of the negative list on foreign investment in the first half of the year, implementing an across the board management system based on pre-establishment national treatment and negative list. President Xi also announced some other more general policies, such as enhancing alignment with international trading rules, increasing transparency, upholding the rule of law, encouraging competition, and opposing monopolies. President Xi said that the reshuffling of China’s administration that started in March 2018, including the newly-established State Administration for Market Regulation, was meant to remove systematic and institutional obstacles that prevent the market from playing a decisive role.

All of the above-mentioned steps, together with some other important points, were condensed into this 40-minutes speech and presented at a high level. As a result, some technical details had to be left out, making some of the announcement quite general. Probably having foreseen ‘promises fatigue’ and some doubts by the international community, President Xi did emphasize towards the end of his speech that these measures would be made a reality “sooner than later” and that China's door of opening-up will only open up “even wider”.

Such new opening-up measures, once implemented, will surely bring more and better products and services to an increasingly enriched population of 1.4 billion people, with a per capita GDP close to 9,000 US dollars. The three cities with highest per capita GDP of over 17,000 US dollars – Tianjin, Beijing, and Shanghai –boast a total population of 60 million people, more than that of Italy. As China makes tremendous efforts to achieve an economy driven more by domestic consumption than investment and export, this will add great value to that ongoing process.

China’s new steps will also provide more opportunities for foreign producers, such as those of vehicles, services, in particular in the financial sector, and investors. Taking the financial sectors for example, even after China’s WTO accession negotiations, banking, securities, and insurance remain highly protected with a strict cap of foreign equity, serious geographic limitations on the establishment of branches, and stringent restrictions on the scope of business of foreign financial institutions. Even among the 16 free trade agreements (FTAs) signed by China, few of them achieved any new liberalization of the financial sector except the one with Australia, which brought limited additional liberalization. Even as China announced much bolder measures to substantially open up its financial sectors, the clause that followed, that this will “be based on [China’s] own timelines and roadmap”, triggered some doubts about how and when such measures can become reality.

President Xi’s announcements offered great hope that key industries such as finance will be substantially opened up and that this could be done in an expedited manner. Just hours after President Xi’s speech, the head of China’s central bank, Yi Gang, said at the Boao Forum that new measures to liberalize China’s financial sector will be implemented within the next few months.

What is also very important is that President Xi’s speech also marks a revolutionary transition by China from the intransigent position of not making unilateral concessions and only strict give-and-take. This may help reduce the stark gap between China and other major economies when it comes to liberalization regarding goods, services and investment, and therefore providing better chances for future multilateral trade negotiations. Meanwhile, while the multilateral trading system represented by the WTO is plagued by protectionism and unilateralism, the announcements by President Xi send a very positive signal that urges other major players to play a responsible role in supporting the multilateral trading system.