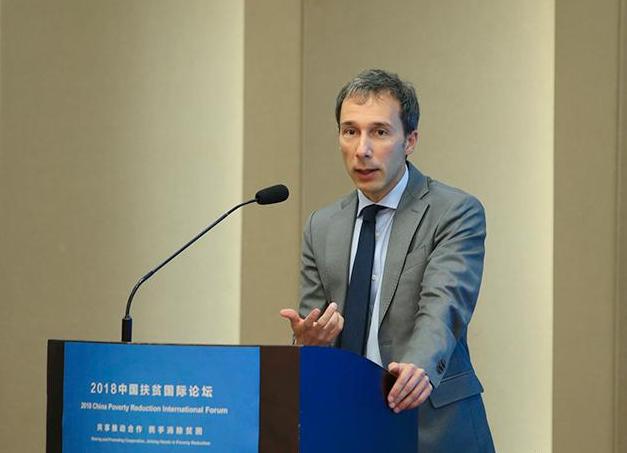 Matteo Marchisio, country director and International Fund for Agricultural Development representative for China, the DPRK and the ROK, recently shared with People’s Daily (PD) on his views about China’s poverty alleviation efforts, in which he praised China’s progress in alleviating extreme poverty and promoting economic and social development as extraordinary. The following are some excerpt of the interview.

PD: How do you see China's progress in poverty alleviation, economic and social development and the building of a moderately prosperous society in all respects in the context of coordinated epidemic prevention and control?

Marchisio: I believe China’s progress in alleviating extreme poverty and promoting economic and social development can be considered extraordinary, particularly if we consider that only 40 years ago there were more than 800 million people living in poverty, more than 90 percent of the population at that time. No other country can claim to have achieved such an impact on poverty so quickly. Clearly, we should all commend China’s leadership for this unprecedented achievement.

As a representative of an international development organization dedicated to reducing poverty and promoting rural development, the International Fund for Agricultural Development (IFAD), I travelled in the most poor and remote areas of China to oversee the implementation of the poverty reduction projects that my organization finances: in the Liupan mountain area in the Qinghai province, in the Qinba mountains area in Sichuan and Shaanxi, in the remote villages on the mountains of Yunnan, Jiangxi, Hubei, in Ningxia, in Inner Mongolia…I am a witness of how the lives of the poor households in these villages has improved over the past six years, since I have been working in China.

Let me conclude by saying that certainly the COVID-19 pandemic had an impact on the livelihoods of the most vulnerable segment of society. One important lesson of the epidemic is that although the virus may hit everyone, it is the most vulnerable who were most impacted: they had limited access to quality health services, less capacity to cope with long periods of unemployment and loss of income, and their livelihoods were most affected by the movement restriction measures that were implemented to contain the epidemic. Some statistics reported that, during the pandemic, farmers expected a decrease in income between 10-40 percent, with 80 percent of the surveyed farmers anticipating more than 20 percent income decrease.

However, after twelve months since the epidemic started, we can confirm China has overall managed to contain the crisis. China has become the first country to bring the COVID-19 under control and resume work and production. China’s GDP grew by 0.7 percent year-on-year in the first three quarters of this year, making China the first major economy in the world to achieve positive growth. China is recognized for having led in both pandemic prevention and control, and economic recovery. This is because of China’s extraordinary capability in mobilization, coordination and implementation that withstood the great risks and challenges of COVID-19. The use of modern information and communication technology (ICT) by tracking and identifying the potential risk of COVID-19, for instance, has worked very well in China.

Marchisio: Since 2014, when I took over the responsibility of the IFAD program in China, I traveled and visited many of our project sites, in Inner Mongolia, Hubei, Jiangxi, Qinghai, Sichuan, Ningxia, Shaanxi, Yunnan and Hunan. Most of these sites are situated in remote, mountainous areas, and characterized by poor infrastructures and facilities, including – often – poor access roads, and – in some cases – no access to safe drinking water. These villages were predominantly inhabited by elderly, young children, and sick or disabled people. Most of the young population had migrated to urban areas in search of an employment opportunity, and returned to the villages only a few times per year.

Each village I visited, each household I talked, each story I heard impressed me deeply, but if I have to pick one, I would probably select that of Ms Zhang Danying, from Shaanxi province, who I met in 2016. Ms Zhang was laid-off from her factory in 1998. Through an IFAD-supported project, the Qinling Mountain Area Poverty Alleviation Project, she received in 2004 training in sewing and business management, and a loan from the project thanks to which she purchased 30 sewing machines and started her own sewing business. Thanks to her undeniable qualities and perseverance, her business flourished: in a few years Ms Zhang was able to employ more people, access credit from banks, and expand her production. She further expanded and diversified her business, starting-up a livestock processing company, which now employs more than 1,000 workers and turns over 650 million yuan a year.

Besides the successful case of Ms Zhang, what I really value in this story is that Ms Zhang did certainly benefit from IFAD support when she was in need, but later on she returned the benefits she received to her community and became a champion of IFAD values. Ms Zhang is a champion of women empowerment. 80 percent of her employees are women, and was deeply committed in contributing to poverty reduction in her community. She targeted the poor as her employees and as the farmers she sourced from. More than 20 percent of the households from which she sourced from have lifted themselves out of poverty through this employment.

IFAD has probably changed the life of Ms Zhang, but Ms Zhang has contributed to improve the lives of the people in her community.

PD: What role do you think digital technology can play in promoting rural revitalization? What do you think of China's performance in this regard?

Marchisio: We have observed how digital technology provides momentous opportunities to accelerate development for communities: through web connectivity, poor communities can receive access to service providers and information not otherwise available to them. Through e-commerce, agricultural producers can reach consumers in a vastly shortened value chain, thus improved efficiency and in the end profitability for farmers. China is now seen globally as being at the forefront of developing such innovative digital solutions, bringing opportunities not just for China but also development of tools useful in other countries.