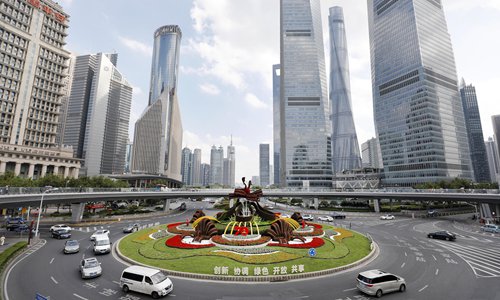 Since the founding of the People’s Republic of China (PRC) in 1949, the Asian country has made brilliant achievements and drawn global attention. Within seven decades, China has completed the industrialization process which developed countries took hundreds of years to achieve and grown to become the second-largest economy from wallowing in poverty and bleakness.

The founding of the PRC has changed the global political landscape, encouraging people in colonies and semi-colonies, who were seeking liberation and independence as well. China has been playing a pivotal role in safeguarding global peace and multipolarization. In spite of twists and turns along the way, China’s development is of great significance to the world.

Great changes have taken place in terms of economic development in China over the past 70 years. In 1952, China’s GDP stood at 67.9 billion yuan ($9.55 billion); while the figure exceeded 90 trillion yuan ($12.66 trillion) in 2018, an increase of 1,325 times. China has been contributing more than 30 percent of the global economic growth for many years, outperforming any other economy. China has served as the global growth engine and stabilizer, which is a blessing for both Chinese people and human history.

China’s progress has not only contributed to political and economic changes across the world, but also provided an alternative to the Western development model. It offers another option for countries which want to seek development while at the same time maintaining independence.

China’s unique path has not only absorbed Western development experiences, but is also based on its own conditions. It’s fair to say it’s a kind of integrated innovation.

The reason why China can make such great achievements within only 70 years lies in its politics. China has rejected the old and rigid closed-door policy and any attempt to abandon socialism. It won’t simply replicate and copy what the West has done. This shows the extraordinary political wisdom and willpower of the Communist Party of China.

Besides, political stability has guaranteed China’s continuous development. Some countries are plagued by partisan struggle and policy uncertainties brought about by the change of government. But in China, the country’s political system has ensured the continuity of long-term projects and helps concentrate resources on accomplishing major tasks.

The superiority of China’s development path lies in that it emphasizes “common values,” which are distinct from the exclusionary and coercive “universal values” of the West. The West’s “universal values” mainly serve to promote the Western model to the rest of the world. The West trumpets any country can succeed as long as it applies Western values and development model. Yet it has been proved over decades that it is wrong as every country has a different domestic situation and what can work smoothly in the West may not suit countries in other regions.

China has also made contribution to redefining democracy. Chinese democracy transcends the Western democratic concept, the key features of which are elections and competition among political parties. China believes those engaged in street politics and color revolution in the garb of democracy pose a challenge to Western democracy.

China has come up with some new development concepts. It emphasizes realizing comprehensive and coordinated development in economy, politics, society, culture and ecology by continuous reform. This can be learned by other countries, especially developing ones.