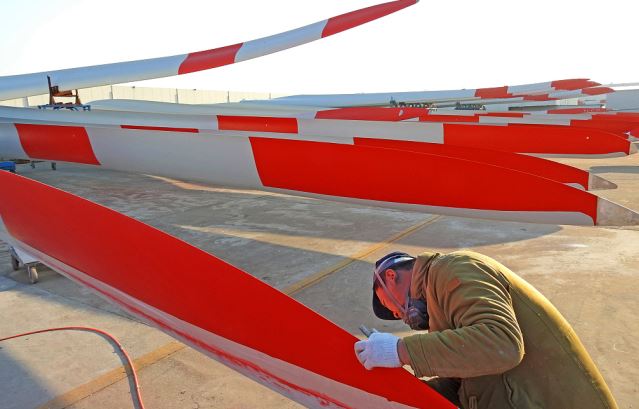 On Friday, December 14, 2018 in the Economic and Technological Development Zone of Lianyungang City, Jiangsu Province, workers undertake quality checks of wind turbine blades before they leave the factory. (Photo: VCG)

At a Thursday meeting of senior leaders of the Communist Party of China, the major topic of the discussion was the economic outlook for 2019. What will next year look like for China’s economy, given the complicated international environment? How will it develop? This concerns not only China, but also the expectations for global growth.

Based on what we know of the discussions, the leadership has three main missions.

Since the beginning of this year, the government has pursued stable growth that can effectively respond to the profound changes in the external environment. Efforts to fight the "three tough battles" – controlling risks, reducing poverty, and tackling pollution – have shown good process. And there have been advances in supply-side structural reforms.

The meeting proposed efforts to further stabilize employment, the financial markets, foreign trade, foreign investment, and domestic investment. And it called for maintaining continuous and healthy economic growth and overall social stability, especially in the context of increasing global trade frictions and rising uncertainty in world economic growth. By continuing to develop in a stable way, China will continue to be the engine of world economic growth.

In his speech at the China International Import Expo in November, China's President Xi Jinping said that the country's economic development has encountered some prominent problems. In some areas, risk and uncertainty has increased, and some enterprises have faced growing difficulties in doing business. However, he also stressed that, in general, these are the kinds of problems that accompany development, and China is taking steps to address them.

The most important steps mentioned by President Xi was the encouragement of high-quality development, from which its people will be the beneficiaries. In 2019, high-quality development and improving the people's sense of happiness and security will be the guiding principles for China's economic advancement. This is why the government will continue pursuing supply-side structural reform as its main task. It will deepen market-oriented reforms, further open up and accelerate modernization of the economy. It will also seek breakthroughs in the prevention of major risks, targeted poverty alleviation, pollution control, the development of the manufacturing sector, the cultivation of the domestic market, rural revitalization, and regional coordination. It can be expected that work to expand the domestic demand and strengthen the real economy will play a more prominent role in growth next year.

China's reform and opening up policy has become the country's second revolution. It has profoundly changed China, and also profoundly affected the world. This year marks the 40th anniversary of China's reform and opening up. Since the beginning of the year, the government has announced a series of new opening measures. This includes a substantial reduction of import tariffs on 1,449 consumer goods and 1,585 industrial products, and a new shorter negative list for foreign investment. And the government has promised greater openness to foreign investment in finance, automobiles, aircraft, and ships, among other fields. According to a World Bank report, China's business environment ranking has increased by more than 30 places since last year. And turnover from the first China International Import Expo reached $57.8 billion, which reflects the potential of China's massive market.

In 2019, China will hold the second Belt and Road Forum for International Cooperation and the second China International Import Expo. As for the issue of development, China has always acted according to its own national conditions. Regardless of whatever storms may lie ahead, China's government will take the initiative and grasp strategic opportunities for development.

Taking these three missions together, and the overall state of China's economy, it's clear that the fundamentals of the country's healthy and stable economic development have not changed, nor have the factors that support high-quality development and the momentum towards growth. As China prepares to celebrate its four decades of reform and opening up, the outcomes from this week's leadership gathering can go a long way towards reassuring the world that the future is bright for China's economy in 2019.