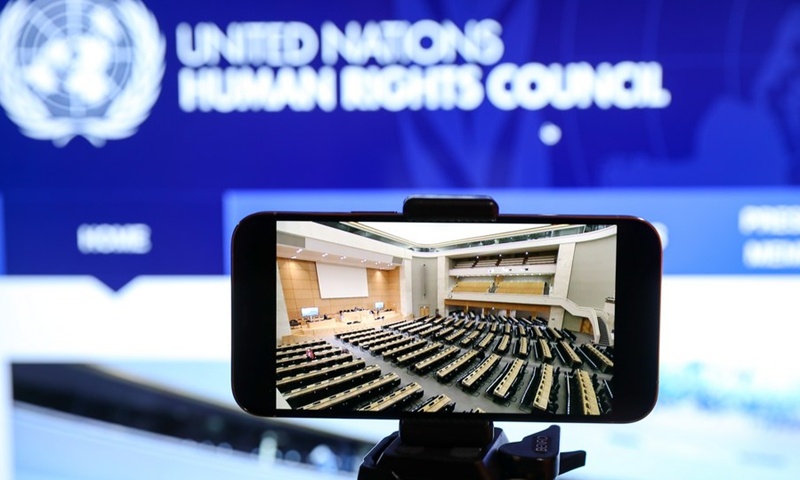 China's influence in the UN has continued to rise in recent years. This indicates that China is exerting greater efforts to shoulder international responsibilities within an influential multilateral platform. It exemplifies how the country is maintaining uniformity with the policies and actions of countries across the world. China has the veto power in the UN Security Council, and has taken a series of moves to ensure balances of power within the UN.

Now China can play a more influential role on the world stage, especially with the UN Human Rights Council. This could offset the monopoly of the so-called Western universal values and provide other developing countries with more choices in human rights.

Since the Biden administration came into power, it has dealt with world affairs with the banner of human rights. Former US secretary of state Mike Pompeo outlined his campaign to redefine and prioritize human rights in a speech billed as "Promoting and Protecting Human Rights: A Re-Dedication to the Universal Declaration of Human Rights" during the 75th UN General Assembly in September 2020. The US believes that the Universal Declaration of Human Rights is, to some extent, inspired by American traditions. It feels that many of its provisions are closely related to The United States Declaration of Independence and The Bill of Rights.

Recently, US Secretary of State Antony Blinken released a statement titled "Putting human rights at the center of US foreign policy," showing great concern about this issue.

The US' so-called reshaping of human rights hints that the country believes human rights are simply the inalienable freedom of individuals. It suggests that human rights have absolute standards, and cannot be affected by social conditions. The US also thinks that China and other developing countries are trying to justify themselves for allegedly trampling on people's basic civil and political rights by citing economic and social rights. But is this really the case?

In the COVID-19 fight, the US has been hesitating between freedom and fairness. Tens of thousands of lives are lost from the virus, but the US conceals the fact under the excuse of the "freedom of choice." On the issue of racism, US' human rights have failed to protect minorities. This will inevitably lead to a situation whereby the American people cannot truly feel freedom and equality in terms of psychology, economy, society and culture. It is also a manifestation of political alienation.

The reshaping and revival of the concept of human rights is not to return to the past. It instead faces the facts of society and an open future. China's brilliant achievements have made in human rights - be it the BRI or poverty alleviation. These are the best evidence to enrich the meaning of human rights worldwide. First, during a country's development, human rights must be balanced with the needs of economic development. Second, when examining a country's human rights standards, the international community should consider its cultural background.

Facing the intensifying China-West competition, China's concept of human rights combines the principle of sovereignty and non-interference in internal affairs, collectiveness and autonomy. It also utilizes traditional and non-traditional rights. China's concept of human rights should adhere to the core values of equal development, win-win cooperation, security and tolerance.

The author is a professor of the National Human Rights Education and Training Base of Southwest University of Political Science and Law.