The Shangri-La Dialogue (SLD), an annual inter-governmental security forum organized by the International Institute for Strategic Studies (IISS), is often perceived as the biggest and most influential of-its-kind in the Asia-Pacific region. As a delegate of the Chinese People's Liberation Army (PLA), I've attended the event several times and witnessed the Chinese army's rising voice at international forums. 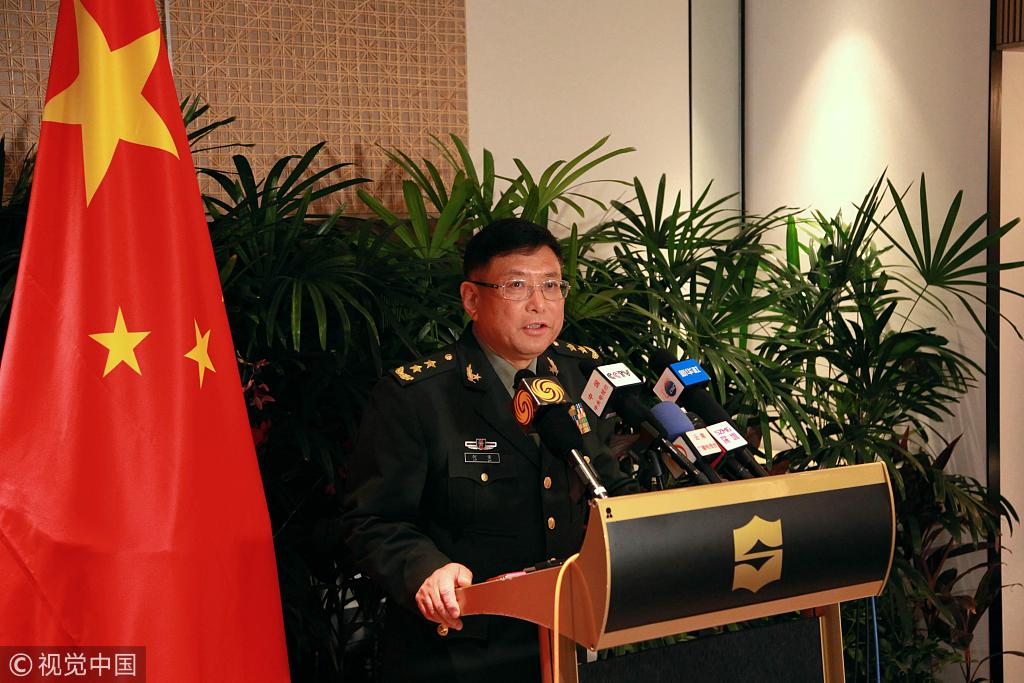 He Lei, Lieutenant General in the PLA and also deputy head of the Academy of Military Sciences of the PLA, at SLD. (Photo: VCG)

This year, the SLD saw the largest number of participants with more high-ranking officials attending. The Chinese delegation was led by He Lei, Lieutenant General in the PLA and also deputy head of the Academy of Military Sciences of the PLA. I think the SLD's narrative this year consists of key words such as Indo-Pacific, rule-based order and South China Sea.

Indian Prime Minister Narendra Modi, during his keynote speech at the opening dinner, set out his vision for the Indo-Pacific region. US Secretary of Defense James Mattis elaborated on the elements of an Indo-Pacific strategy by the US. Both sides have claimed that they would treat the Indian and Pacific Oceans as a whole, highlight maritime security of the Indo-Pacific region and reaffirm ASEAN's pivotal position in the zone. However, it is obvious that India and the US have two different versions of the Indo-Pacific.

As for Modi, the Indo-Pacific region is no more than a geographical construct. As a country located near the junction of the Indian and Pacific Oceans, India will naturally react to any changes in the region. As for Mattis, the region is attached to the US' geostrategy under the comprehensive national security plan. In the Indo-Pacific area, economic and defense cooperation among US allies and partners matters the most. Building a united front in the sea against challenges from the mainland is a deep calculation in the US' Indo-Pacific strategy.

While declaring their expectations of the region, Mattis said he wanted "free and open waters," while Modi laid emphasis on inclusiveness of the zone. What's more interesting is that most countries have shown doubts and confusion about the US' Indo-Pacific strategy.

Since former US secretary of defense Ash Carter highlighted "rule-based order" 38 times at the 2015 SLD in his speech, the phrase has been frequently used for three consecutive years. The US was accused by some delegates of violating trade principles and irresponsibly exiting some multilateral mechanisms and treaties, but China took on the most reprimand. Either by finger-pointing or insinuation, some Western powers such as the US, the UK and France condemned China for jeopardizing navigation freedom and trying to solve territorial disputes through intimidation and coercion.

During the SLD, the UK and France even cracked a joke about starting a small "arms race" in the South China Sea by competitively deploying more warships. The humble add-on won't make a big difference, but they unusually took on China at an international event. Their rant against China proves their insincere use of rules, which they believe apply only to others.

The SLD has also seen Western leaders and media dominating the setting-up of the agenda and narratives on international events. "Militarization," like a label, has been firmly put on China before anyone can explain the concept. Playing up the concept has become a fad in this year's meeting.

Since the first day, Mattis started making unwarranted allegations against China for "militarizing the South China Sea." Such accusations continued in the following meetings, overshadowing facts about the South China Sea. Lieutenant General He, head of the Chinese delegation, organized a press conference and proclaimed China's firm stance on sovereignty and integrity. He also expressed Beijing's determination and confidence to protect its territory. Such a clear message has made an impact on the SLD.

As a member of Chinese delegation that has been to the event several times, this year's SLD has impressed me a bit more about China's growing influence on world affairs, and made me realize the urgency of telling China's stories well.

The author is a retired major general of the Chinese People's Liberation Army.