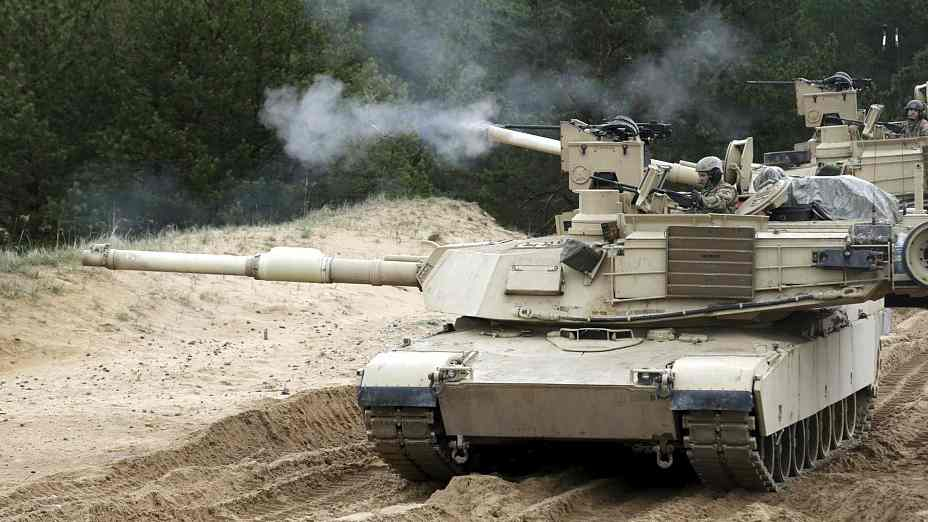 US M1A2 Abrams tanks during a training exercise in Adazi military base, Latvia, May 7, 2015. ( Photo: CGTN)

In a historic first, China announced earlier this month that it will cut ties with US companies involved in arms sales to Taiwan. On July 8, the US State Department approved two arms sales to Taiwan including 108 M1A2T Abrams tanks, 250 Stinger missiles, 16 M1070A1 heavy equipment transporters and related equipment worth 2.22 billion US dollars.

According to the Pentagon, the sales will involve up to 30 US government and 15 contractor representatives. Companies named as main contractors to build these weapons are General Dynamics, Raytheon, BAE Systems and Oshkosh.

The proposed deals came at a touchy time as China-US relations are already being tested on multiple fronts. The Trump administration once again challenged China's bottom line in an apparent show of support for Taiwan leader Tsai Ing-wen, who was on a trip to North America.

US arms sales to Taiwan have always been understood as a provocation and met with strong opposition from China. This time, defense experts say, China decided to retaliate because it has had enough.

"The US has stepped up all-round pressure on China, and now it is openly supporting separatist forces. China has been putting up with it for too long," said Professor Su Shiwei, a researcher at Fudan Development Institute.

The Trump administration has been seeking to promote the development of the US arms industry by expanding arms exports and sales to its allies.

By selling weapons at high prices to Taiwan, the U.S. will embolden the "Taiwan Independence" separatists led by Tsai to strengthen its foothold in the region and enrich the U.S. arms industry. All of this subsequently translates into political gains for the administration. For Trump, it would've seemed like a winning move, Su said.

"Except China responded differently this time," Su said. "Imposing sanctions on American companies shows China now is capable of doing more, that it has more cards."

By doing so publicly, China is telling those depending on the U.S. for security to think twice, he added.

The U.S. is no stranger to sanctions. It has dished out almost 8,000 sanctions globally, making them a huge part of Washington's foreign policy. The U.S. recognizes sanctions as an effective tool, and the one that's softer than military action.

China has shown in the trade war its readiness to retaliate against U.S. business interests, let alone those companies deemed damaging to China's core interests. In this case, it is the U.S. arms firms' civilian market.

Civilian business could be hit

The U.S. arms industry has few to no direct dealings with China. But the armament producers' non-military businesses and subsidiaries are wide-reaching.

Gulfstream Aerospace, a private jets maker owned by General Dynamics, has been a regular at Zhuhai airshow to sell its luxury jets to wealthy Chinese. Last year, the company raked in a 2.3-billion-U.S.-dollar profit in Asia, with China being its third biggest market.

Oshkosh will make the heavy equipment transporters included in the package. It also makes emergency vehicles and fire engines which are used in more than 60 Chinese airports.

Raytheon, which makes the Stringer missiles, is set for a 121-billion-U.S.-dollar merger with aerospace firm United Technologies. The latter has an office in China and sells aircraft engines and elevators in 11 Chinese cities. The new company created by the merger may have concerns for its existing business in China.

Another company speculated to be a potential target for sanction is Honeywell. Although the high-tech firm is not directly involved in the arms sales, it produces the engines for General Dynamics' Abrams tanks. Honeywell has claimed it does not decide where its products will be used.

China has not specified which companies it will sanction. But this uncertainty acting as deterrence is more powerful than targeting specific companies, Su said.

"It shows that China reserves the right to freeze out anyone involved in selling weapons to Taiwan, even a component maker," he said, adding "And this is something Trump would care about because he needs those companies' support."

How substantial China's sanctions will be for the U.S. companies is doubtful, however. For some of the companies mentioned, their business interests in China are limited considering their sizes worldwide.

But inflicting economic damages to American businesses is not China's intention. The point it makes is what matters, experts said.

U.S. arms sales to Taiwan are unlikely to stop, and their quantity and quality could both increase in the future, noted Yang Zhen from the Fudan Institute of Belt and Road and Global Governance.

"But in the long term, China will also have more means to fight back. The price for acting reckless will get higher for American companies," Yang said.

It is Tsai who should be concerned, because they just discovered that China's stance on Taiwan is backed by actions, Su said. What worries them even more, however, is that the Taiwan issue could be pushed to the side in China-US relations, when the U.S. sees that it can no longer be leveraged against China, he said.

"There is currently a lot of unpredictability from the United States, and Taiwan is likely to find it less dependable."