OPINIONS China should hit back smartly at US

China should hit back smartly at US 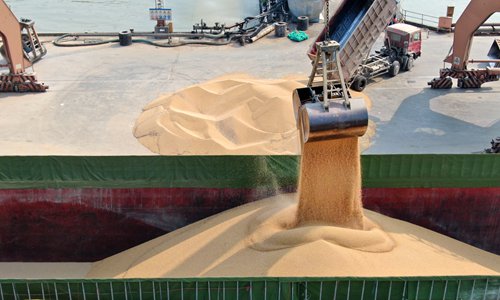 A cargo ship loaded with soybeans at a port in Nantong, East China's Jiangsu Province in May. (Photo: IC)

China does not need to brace for the trade war at the pace set by the US and China could direct precision strikes at vital links in the US economy to inflict systemic damage to bring the latter back to the negotiating table, Chinese analysts said on Sunday, after the US on Friday increased an existing 10 percent tariff on $200 billion in Chinese goods and products to 25 percent.  The comments came after Chinese Vice Premier Liu He called on both sides to remain calm and not escalate trade tensions further, after the 11th round of bilateral trade negotiations concluded in Washington on Friday local time.Amid the developments over the weekend, Chinese experts attending a seminar held at the National Academy of Development and Strategy with Renmin University of China first expressed anger at US accusations that China had backtracked on its commitments in the trade talks, saying that "there is no such a thing as a commitment before any deal is signed." They also noted that the US is eager to force an unfair deal on China, but time is on China's side as the trade war escalates.Former vice commerce minister Wei Jianguo said the calm demeanor of Liu as he gave an interview must have surprised the US. Wei said China would take retaliatory measures to make the US know that China is not only resilient against the higher tariff but is capable of hitting back. This would help the US to come to its senses and abandon its misconceptions, Wei said.Wei said cooperation is the only right choice for China and the US, and the current situation is no more than an interim setback. It would be wrong to say the talks had gone south or to believe the situation will end in a confrontation, Wei added.US officials at noon on Friday (Beijing time) increased the existing 10 percent tariff on $200 billion in Chinese goods to 25 percent. Minutes later, China's Ministry of Commerce (MOFCOM) said that China "will have to take necessary countermeasures."Chinese negotiators urged their US counterparts to remove all raised tariffs, set realistic goals for Chinese purchases of US goods and improve the balance of the wording of the deal text. The MOFCOM had not specified what the countermeasures would be as of press time on Sunday. Extra impactGao Lingwen, a senior research fellow at the Institute of World Economics and Politics with the Chinese Academy of Social Sciences, (CASS) said most of the extra costs brought about by the Trump administration's heightened tariffs will be borne by US consumers. "Chinese exporters have had to shoulder about 10 percent of the tariff burden imposed by the Trump administration so far. The remaining 90 percent is eventually passed on to US retailers and consumers," Gao said at the same seminar. One key source of the confidence some in the US feel about the ease of winning a trade war is the sound performance of the US economy so far. However, Gao said that as the tariff pain is gradually passed on to US products and consumers, such confidence will come to an end."China does not need to match the Trump administration's tariff war in terms of scale and tariff percentages. Instead, China could shift its focus from hitting Trump's voter base to pummel a carefully selected industrial chain linkage point that could cause systemic risks to the US economy," Gao said.Gao did not tell the Global Times which US sector qualifies under his standards.The Shanghai benchmark stock index went down 4.5 percent last week, while the Dow Jones Industrial Average was down 2.12 percent.Measures at homeChinese customs data showed on Wednesday that despite facing heavy duties, Chinese exports to the US declined only 4.8 percent year-on-year in yuan terms in the first four months of the year, compared with a hefty 26.8 percent drop in imports from the US.China's trade surplus with the US, one of the main grievances of the US administration against China, widened by 10.5 percent to 570.2 billion yuan ($84.17 billion) during the period, according to data from the General Administration of Customs.Chinese experts supported Liu's statement that China should focus on its own economic affairs to cope with the ongoing trade war.Zhang Yansheng, chief research fellow at the China Center for International Economic Exchanges, said the Chinese government could work to help exporters cope with rising costs.Manufacturers are already facing challenges in the process of an industrial  transformation, and the trade war will add to the pressure Zhang said. "The government must think thoroughly but act quickly to help exporters in their diversification efforts by improving their technological ability, retaining their strength in skilled labour and addressing the gap in capital and sales channels," Zhang told the Global Times on Sunday."Despite the escalating tariff war, China will continue talks with the US to dispel influence from US neoconservatives to decouple from China in all aspects," Zhang said.Gao said the government should do what it can to implement policies to retain vital industrial chains in the Chinese mainland, as a relocation is sure to happen, and is already happening, as a result of the trade war. "China should make no promises on its foreign exchange rate, as doing so would make it less-market oriented."