OPINIONS China should not apologize for beating

China should not apologize for beating 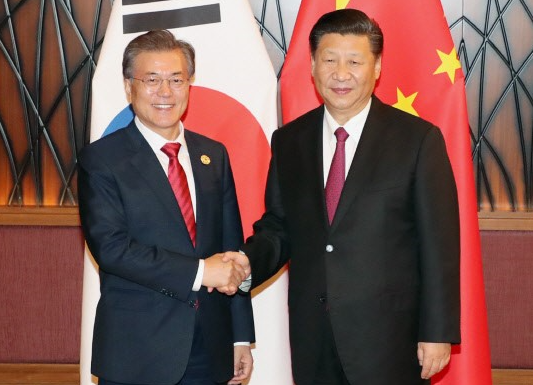 South Korean President Moon Jae-in's state visit to China opened a new chapter in bilateral relations. During Chinese President Xi Jinping's meeting with Moon, both sides expressed that they attached great importance to China-South Korea ties and acknowledged the achievements over the 25 years since the establishment of diplomatic ties. China and South Korea have signed cooperative documents in areas such as trade, green and ecological industries, environment and health. The deadlock caused by the THAAD has already been broken. This new situation is in line with the interests of the two countries, but some South Korean politicians and media are trying to divert public attention and twist the full view of Moon's visit. When some South Korean reporters covering a trade event attended by Moon were beaten by security guards hired by the event's organizer, the Korea Trade-Investment Promotion Agency (KOTRA), South Korea media pointed a finger at China. Some media reported that the South Korean government has "demanded a formal apology from China."Of course it is not a good thing when journalists are beaten. The event was organized by South Koreans and the security guards were hired by a South Korean agency. KOTRA should be held responsible for the beating and should apologize, not the Chinese government. In essence, it was a fight between South Koreans because the security guards were teaching a lesson to the South Korean journalists that they deem "disobedient" on behalf of their South Korean employer. As the incident took place in China, China has the obligation to handle the case from the perspective of public security. Anyone who breaks the law should be held accountable and it has nothing to do with diplomacy. Chinese authorities should convey their sympathy to the injured South Korean journalists out of courtesy. However, the Chinese government should never apologize for this incident. The Chinese public will not allow its government to apologize to foreigners when it has done nothing wrong. If the South Korean media truly wants an apology, they should make the request to KOTRA or the South Korean government. After all, it was the South Korean government that demanded high-level security and the South Korean agency obliged by giving its security guards directives.  South Korea wishes to improve ties with China. Some South Korean media's arrogant manners show that at least some South Koreans are trying to conceal their country's urgency and instead try to leave the impression that China is begging to improve ties with South Korea. There is no need for China to contest these people. But those South Koreans should know their limit.