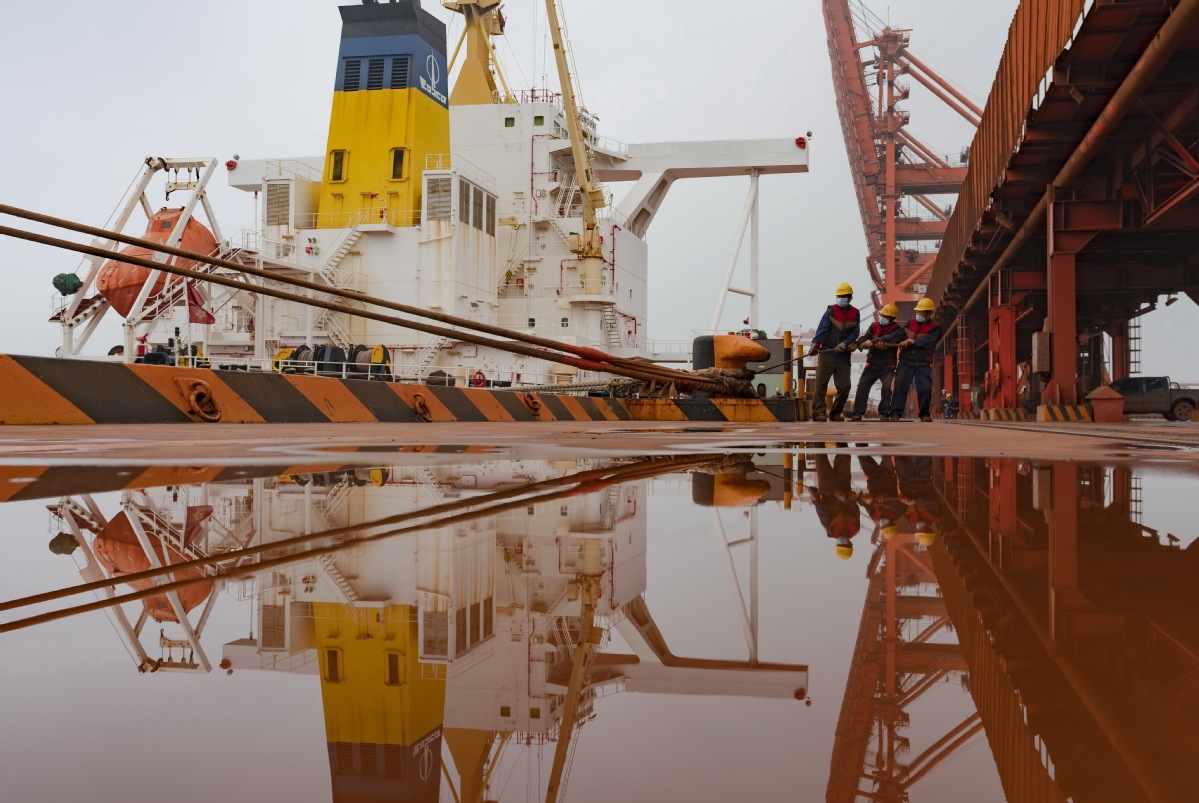 Employees untie the ropes of a ship that is about to leave the port of Caofeidian in Tangshan, Hebei province. [Photo/Xinhua]

At a recent meeting held to analyze the economic situation and plan for the second half of the year, the Political Bureau of the Communist Party of China Central Committee said China still faces uncertain situations and problems that are likely to exist in the medium and long run, and urged the country to accelerate the establishment of a "dual circulation" development pattern.

It urged the country to adhere to the mapped strategic direction of structural adjustment, and by relying more on scientific and technological innovation and improving cross-cycle macro-control measures, achieve a long-term balance between steady growth and risk prevention.

China must realize that many of the problems it faces will exist in the medium and long run and thus make long-term preparations. The world is going through a period of transition with changes not seen in a century. This, coupled with the protracted economic, political and social fallout of the novel coronavirus outbreak on all countries will exacerbate drastic changes in the global situation and increase external instability and uncertainty.

At the same time, with accelerated structural adjustment and upgrading, some new problems could emerge which, if not properly addressed, could escalate into new risk points. The combination of cyclical issues, structural issues and global changes requires that China deal with a series of challenges it faces at home and abroad with a proper and long-term approach.

The impact of the pandemic on the world's major economies will be severe and long-lasting, and the global economy will face recession and protectionism for a long time to come. China should take advantage of its huge domestic market to expand demand and form a "dual circulation" development pattern in which domestic economic cycle plays a leading role while international economic cycle remains its extension and supplement.

To facilitate the establishment of an efficient domestic economic cycle, China should first foster new growth points and new development drivers, realize industrial upgrading through new infrastructure construction and a new round of industrial revolution, and expand investment and consumption demand by promoting a new type of urbanization and city clusters.

It should work harder to improve the stability and competitiveness of its industrial and supply chains, consolidate the primary status of agriculture to boost its food grain self-sufficiency, and promote the institutional construction of its capital market to gradually establish a strong financial system and capital market.

China has taken emergency measures to deal with the pandemic's impact. However, it is also necessary to prevent the formation of new risks and conduct cross-cycle management from a medium-to long-term perspective to avoid possible drastic economic fluctuations. It also needs to prepare for fierce international competitions that can be expected on multiple fronts in the post-pandemic era.