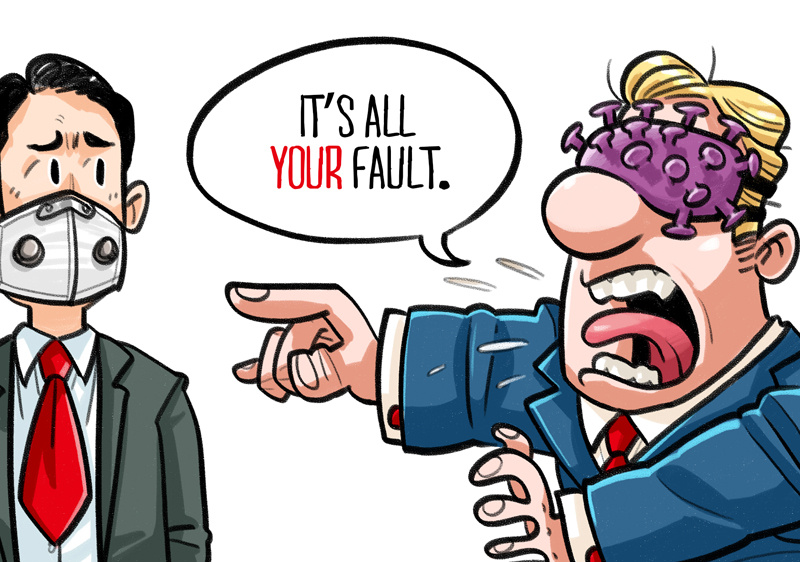 The novel coronavirus pandemic has dealt a serious blow to global health systems and the world economy, and rendered hundreds of millions of people jobless because of lockdowns and other anti-outbreak measures, with the United States being one of the worst-affected countries with more than 1.78 million confirmed cases of infection and over 100,000 deaths.

But had the US administration taken measures to control the spread of the virus at home and strengthened international cooperation in the fight against the pandemic, instead of stigmatizing China, the situation in the country would not have been so bad.

The White House has made it a policy to shirk its responsibility and shift the American public's attention from its failure to contain the virus－and thus win popular support in the US presidential election in November－by blaming China for the country's woes.

The pandemic has exposed many countries' governance problems and shaken the confidence of many developed countries in their national strength, healthcare systems and political mechanisms. In particular, the US delayed its response to combat the pandemic, which has exposed how weak its public health system is. No wonder it has come as a rude shock to many developed countries that China has managed to largely contain the virus at home.

When China was struggling to contain the outbreak in the initial stage, the US reveled in finding faults with China's measures to control the virus. But after China managed to virtually contain the outbreak, and resumed economic activity and started helping other countries to fight the novel coronavirus, the US began blaming it for "unleashing" the virus on the world to change the world order and assume the global leadership. Which is a blatant distortion of facts and a devious attempt to weaken the global fight against the novel coronavirus.

The US' strategy is to contain the peaceful rise of not only China but also other emerging countries. As part of its devilish strategy, the White House is now blaming Beijing for the deadly coronavirus outbreak in the US and exerting pressure on Beijing by imposing restrictions on trade and technology and exploiting the Taiwan question. Washington is also cajoling or coercing its allies to stop cooperating with Beijing in the global fight against the virus for security reasons, in order to fulfill its selfish motives.

So, in the face of the complex international public opinion environment, China should respond to the US' provocations as a responsible major country. It should strengthen its epidemic prevention and control work and take targeted economic development measures to achieve its socioeconomic development goals, which would be a befitting reply to the claim of the US and some other developed countries that "China is on the decline". In particular, it should strive to achieve its goals of eradicating abject poverty and building a moderately prosperous society in all respects by the end of this year.

It also needs to expedite economic development, help strengthen the global industrial and supply chains and thwart attempts to "decouple" the Chinese economy with that of the US and other countries.

To lay a solid foundation for building China into a great, modern socialist country, the authorities should give full play to the country's institutional strengths and use policy and financial leverage to solve the difficulties enterprises face in resuming production, and plug the loopholes in the public health system. It should also be prepared to tackle adversities. And while appreciating the help it received from other countries to contain the outbreak, China should maintain necessary strategic deterrence to protect its legitimate rights and interests in the face of a global crisis.

The author is an associate research professor at the Institute of Contemporary China Studies, Chinese Academy of Social Sciences. The views don't necessarily represent those of China Daily.