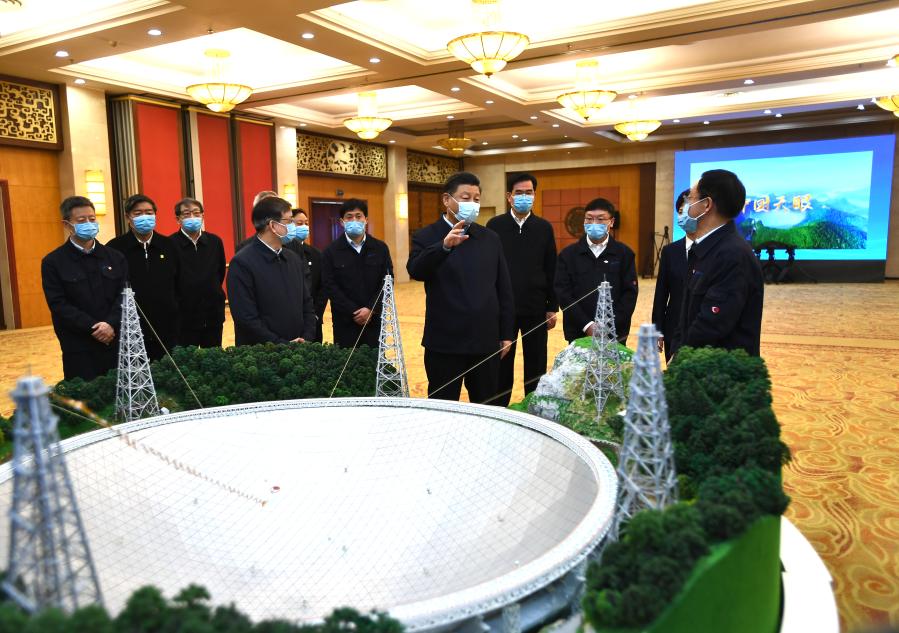 Stressing the importance of science and technology in China's pursuit of building a modern socialist country, Xi called on scientists to scale the heights of global science, and make new and greater contributions to the construction of China's scientific and technological strength at a faster pace, while realizing the country's self-reliance and self-improvement in science and technology.

China's determination to commit itself to independent innovation and global cooperation is best illustrated by the FAST, which is tasked with the ultimate goal of revealing more about the universe and is expected to benefit scientists around the world.

Starting formal operations in Jan. 11, 2020, the FAST is scheduled to be available for scientists across the world from April 1, 2021. In the first year of the telescope's opening to the global scientific community, about 10 percent of the observation time will be allocated to foreign scientists.

The telescope's broad availability shows China's determination to increase its openness to international collaboration. The country, which once isolated itself to the outside world, is fully aware that independent innovation should be pursued in an open environment, rather than behind closed doors.

Space, with all its vastness, is the home of mankind. Every major achievement in astronomy has enriched the treasure house of human knowledge, and every major breakthrough in the integration of astronomy and other disciplines has a profound impact on basic science and the progress of human civilization.

The BeiDou Navigation Satellite System, a major item of infrastructure independently constructed and operated by China, also features openness and compatibility, so as to provide better services to users worldwide.

Deeply engaged in global scientific and technological governance, China is devoted to contributing its own wisdom and helping to build a global community of shared future. It has pledged to take the initiative in planning and actively utilizing international innovation resources, and to establish a cooperative and mutually beneficial partnership with other countries to cope with the future challenges facing humanity.

China has been learning from the experiences of other nations while sharing its own scientific achievements. It will keep on doing this and is willing to engage in dialogue and exchange with other countries on science and technology policy, development planning, research ethics and areas of common concern in science, technology and innovation.

The scientific innovation of the world's largest developing economy has been steadily treading an independent path without excluding international cooperation. That is the ultimate guarantee of a nation's development in the field.

Now, more than at any other time in its history, China needs to be a strong country in science and technology.

Self-confidence can keep a nation moving forward steadily on the road to the future. Independent innovation improves such confidence remarkably. It is self-reliance that has enabled China to stand firmly among the nations of the world, and innovation is the only path leading to new heights in science and technology.

The country has performed an array of feats thanks to its science and technology development strategy. It launched the Mars probe Tianwen-1 on July 23, 2020, kicking off the country's independent planetary exploration mission. The China National Space Administration on Friday released the first image of Mars captured by the Mars probe.

The China Academy of Space Technology has independently developed and launched nearly 300 spacecraft, accounting for the vast majority in the country, and has achieved many breakthroughs in space technology development. And the successful re-entry and landing of the Chang'e-5 capsule has enabled China to obtain its first lunar samples, marking a new start for research of the moon and the planets.

History has proven that China is not scared of suppression, blockades and sanctions. On the contrary, the country is growing resilient and motivated in tackling key problems in science and technology.

China's experience has also shown that it cannot ask for, buy or beg for core technologies in key fields from other countries. Only by holding these technologies in its own hands can the world's most populous country ensure its economic security, national security and security in other areas.

China is making great efforts to ensure that core technologies are self-developed and controllable, while keeping the initiative for innovation and development securely in its own hands.

In the future, the country will uphold the central role of innovation in its modernization drive, and will take self-reliance in science and technology as strategic underpinnings for national development.