On Thursday, China and the US officially signed the phase-one economic and trade agreement at the White House. 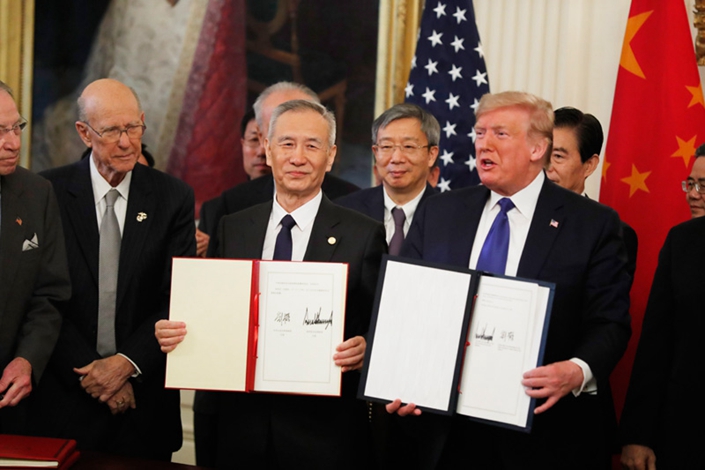 Witnessed by over 200 executives, the high-level signing ceremony is a step forward to a solution that conforms to the common interests of China and the US, and benefits world peace and prosperity.

On Dec. 13, 2019, the two sides declared they have agreed on the text of a trade agreement. A US official said the agreement amounts to "probably the most momentous day in trade history."

By contrast, before the message was released, Managing Director Kristalina Georgieva of the International Monetary Fund (IMF) cited Russian poet Alexander Pushkin to describe the global economy last October, saying "The breath of autumn begins to ice the roadway".

China-US trade relations have gone through some twists and turns over the past couple years, creating uncertainties for the global economy and raising concerns of the international community.

To stop the trade war, both parties must meet each other halfway and manage disputes. Great philosopher Mencius in ancient China said, "Things are born to be different." China and the US differ in history, culture, tradition, social system, and development path and phase. To treat the differences in an objective and rational manner, to explore the significance of mutual learning and common progress dialectically, and to profoundly comprehend the importance of cooperation remain the only right choice for the two countries.

Since 2018, the heads of state of both China and the US have had two meetings and seven phone calls, building consensus, setting principles and guiding the direction for solving the China-US economic and trade issue.

Under the guidance of the consensus reached between the two heads of state, a total of 13 rounds of high-level economic and trade consultations have been held. The chief of the Chinese side of the China-U.S. comprehensive economic dialogue had over 20 phone calls with the US Trade Representative and Treasury Secretary.

It was an arduous progress, but China has followed the principle of resolving disputes through dialogue and consultations, addressing the US' concerns with the greatest level of patience and good faith.

The deal also proves that China and the US can overcome difficulties as they march forward as long as they always respect each other's national dignity, sovereignty and core interests. In a broader sense, it can help rebuild investors' and enterprises' confidence in global markets.

Striking the trade deal is generally in line with China's reform and opening-up policy and the internal demand of China to promote high-quality economic development.

With an expanding domestic market, Chinese enterprises will import more high-quality and competitive products and services from other countries including the US under the rules of the World Trade Organization as well as market and commercial principles, which will help meet Chinese consumers’ ever-growing needs.

Since China and the US established diplomatic ties forty years ago, history has proven that only through cooperation will both be winners.

The two countries have agreed to create a bilateral assessment and dispute settlement mechanism, which allows making joint constructive plans through consultations and promotes stable bilateral economic and trade relations.

When meeting his U.S. counterpart in the same year, the Chinese President also stressed that there are a thousand reasons to make China-US relations a success, but not a single reason to make it sour.

China and the U.S. share broad common interests and play vital roles in a more healthy and stable world economy. On a new starting point, the two countries are shouldering more responsibilities to build a China-US relationship based on coordination, cooperation and stability.