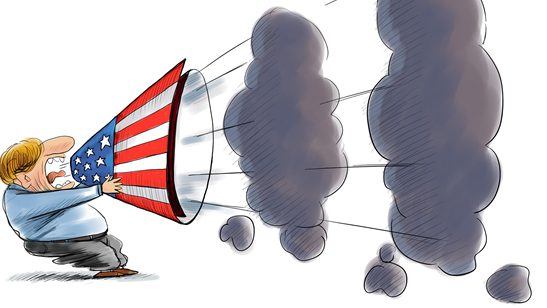 “The things that the US hopes China will do are things that China doesn’t believe are in their own interest to do, so I think we have a stalemate,” said Timothy Stratford, managing partner of Covington & Burling, LLP in Beijing.

In his statement on Monday, US President Donald Trump directed the US trade representative to identify 200 billion US dollars’ worth of Chinese goods for additional tariffs at a rate of 10 percent. He also threatened to pursue additional tariffs on another 200 billion US dollars of goods “if China increases its tariffs yet again” — a move seen by many analysts as unprecedented in its scale and scope.

In response, China has vowed to take "quantitative and qualitative" countermeasures against the proposal.

“The way that China is pursuing, even if they are not telling other countries to follow it, nevertheless, it is proceeding on different assumptions than the US and other countries assumed when China joined the WTO,” said Stratford.

Trump’s Monday night move triggered a drop in global stock markets, with the Dow dropping 400 points in early trading and closing 237 points down, a fall that wiped out all of this year’s gains. However, the Trump administration seemed untouched by these effects, with Peter Navarro, US President Trump's hawkish trade adviser claiming that China has "more to lose" from a trade fight than the US.

Instead of competing about which side has more to lose, Zhao Hai, a research fellow at the Chinese Academy of Social Sciences, pointed out that the more important thing is to find the solution.