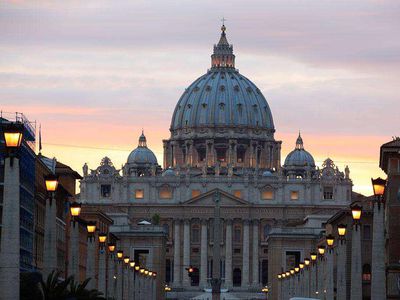 The negotiations between the Vatican and the government of the People's Republic of China represent the most important diplomatic effort by the Holy See in decades, and it is no surprise they are encountering significant opposition in the Western hemisphere.

There are two dimensions that we need to take into account to understand these negotiations. The first dimension is historical-theological. There is a long history of relations between the papacy and political authorities that goes back at least to the early fourth century, under the Roman Empire of Constantine and later of emperor Theodosius, when the Church acquired public relevance. It was the beginning of a long history of bilateral relations between the Church as a community of believers and the political community. It is a history that always had at the center the care of the bishop of Rome (the pope) for his brother bishops and the local Churches, the good relations between the Church hierarchy and the political authorities, and especially the appointment of bishops. These issues were crucial in the "investiture controversy" of the 11th-12th century, in the tensions with emerging nation states in Europe in the early modern period, and in the struggle with nationalisms in the 19th and 20th centuries. The issue of the bishops' appointments was important also in the relations between the Vatican and Soviet Russia and Eastern European countries under communist rule after World War II. But the parallels that are often drawn between the current negotiations with China today and the history of the Vatican Ostpolitik during the Cold War are misleading: the proper historical context for a correct understanding of the ongoing efforts is the entire 2,000-year long history of the Church and of the papacy. In this long history, the procedures for the appointment of bishops have always been very complex: they were often, and in many cases still are (in various forms, always subject to change in the long run) a moment of collaboration between the papacy and secular political authorities.There is also a theological development that adds to this historical context. During the last century, Roman Catholicism has become a more globalized Church: Catholics and the papacy have come to terms with a wider variety of social and political contexts around the world. This means that the Church does not look for the same kind of arrangement for all Catholics in all nations, but strives for improving the relations of Catholics with the political authorities in order to maintain and foster the unity of the Church. The goal of negotiations with political authorities is not ideological, but pastoral in the sense of helping the local Churches live their faith in a given, concrete reality, without artificial divisions between factions in their midst. Those who believe in this possible breakthrough between the Vatican and China today know that there is already a long history of Christianity in China, with which the global Catholic Church needs to be more directly in touch. This is an integral part of the vision of Pope Francis for a Catholic Church that is truly global, at the service of all humanity and of world peace. What is typical of the international activity of the Holy See today is a direct appeal to the logic of the Gospel and not to a worldly or political logic. This is true for all the activities of the Holy See in all countries, encouraging Catholics to be fully Catholic, safeguarding communion within the Church, keeping the genuine tradition and ecclesiastical discipline, and at the same time respecting Catholics as authentically rooted in their particular countries and nations. The Vatican believes in a respectful and constructive dialogue with the civil authorities, and in doing this the diplomacy of the Vatican expresses the wishes of the global Catholic community, which cares for the Chinese Catholic community and its unity, and wants the good of the Chinese people.Much of the resistance against this new relationship between the Vatican and the government of the People's Republic of China is rooted in a lack of understanding of these two key dimensions - the long-term historical framework of the international activity of the Holy See and the pastoral goal of its diplomatic activity. The big historical picture and the proper goals of the international presence of the Holy See are often missing in the criticism against the Vatican negotiations with China. The use of Catholicism as an ideological surrogate for Western ideologies is not new, but is especially at odds with Pope Francis' vision of Catholicism, and it makes it impossible to understand this important moment in the relations between the Vatican and China.