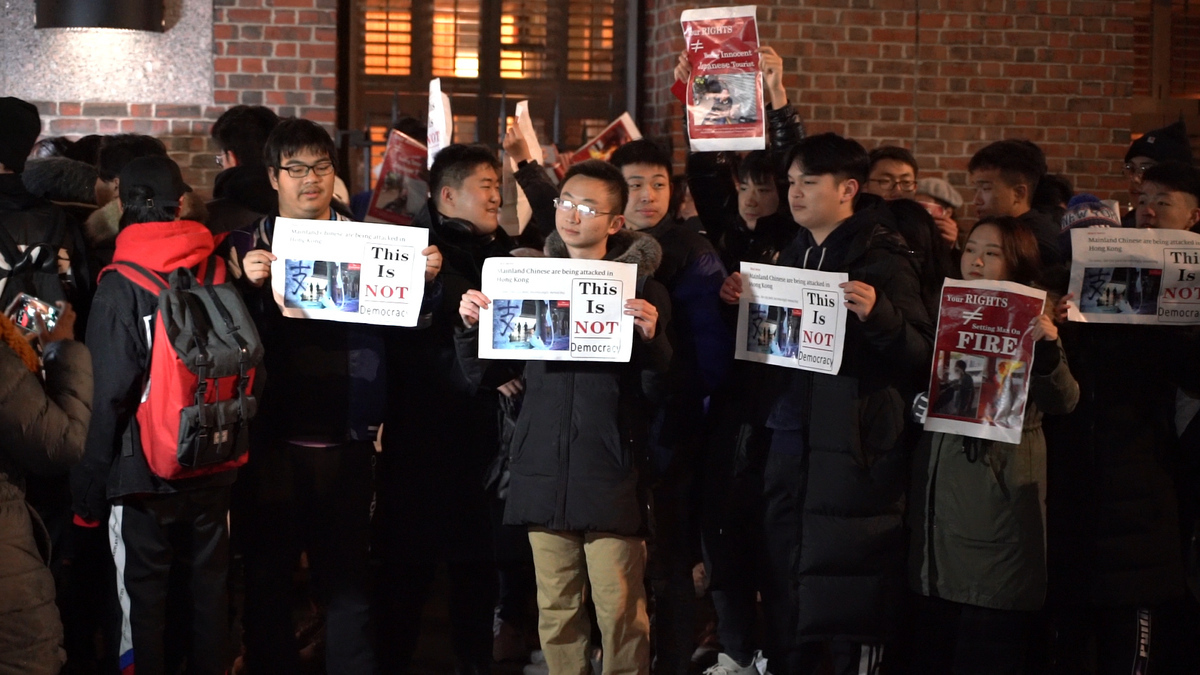 Hundreds of Chinese students protested what they called biased messages about Hong Kong as Nathan Law Kwun-chung, a main figure behind the violence in Hong Kong, attended an event at New York University (NYU) on Monday night. (Photo: China Daily)

Hong Kong belongs to China and its affairs are China's internal affairs. China does not allow any foreign interference in Hong Kong affairs. This is the unshakable position of the country.

While addressing the 11th BRICS Summit in Brasilia, capital of Brazil, Chinese President Xi Jinping said the Chinese government has unswerving determination to oppose any external force in interfering in Hong Kong's affairs.

President Xi’s words are a stern warning to the rioters in Hong Kong and their backroom supporting forces, and reflect the strong determination of the central government to oppose and defeat external forces interfering in Hong Kong affairs and attempting to destabilize Hong Kong.

Any attempt or move to disrupt Hong Kong, undermine China's development, and obstruct the great rejuvenation of the Chinese nation will be opposed by all Chinese people, including the Hong Kong compatriots, and will be destined to fail.

The Hong Kong extremists and radicals have disturbed social order, damaged public property, brutally attacked police officers, and left a trail of smashed or burned items all over the city.

They have trampled on the bottom line of morality, the legal system, and the "One country, Two systems" principle.

Some western politicians and media have been turning a deaf ear to the truth and calling white black. Ignoring Hong Kong residents’ demands and the basic norms of international relations, they openly bolstered violent radicals and separatists, and blatantly interfered in Hong Kong affairs in an attempt to oppress China.

Their gross interference in China's internal affairs has exposed their evil intentions to destabilize Hong Kong and obstruct China’s development.

In what took place in Hong Kong, some external forces have played an extremely disgraceful role. They called the serious criminal offenses committed by the extremists and radicals such as setting fire, vandalizing stores, and attacking police officers “issues on human rights and democracy”, pointed fingers at the Hong Kong government that administers Hong Kong according to the law and the central government’s Hong Kong policy, and smeared and accused the "One country, Two systems" principle.

They even plan to offer open support for Hong Kong rioters and radicals according to the framework of their own domestic laws to create chaos and disrupt Hong Kong, taking the city as a chess piece to contain China.

There is an old saying in China that the clever may fall for their cleverness. The words and deeds of the external forces not only exposed extreme hypocrisy on human rights and democracy issues, but also revealed their anti-China agenda to all Chinese people, including Hong Kong compatriots. Their sinister intentions will not succeed, and the Chinese government will never allow external forces to do whatever they want in Hong Kong.

Violent crimes are not only a "virus" that harms Hong Kong society, but also a public enemy of all mankind. The brutality of the Hong Kong thugs has trampled on the bottom line of human morality and civilization and is absolutely unacceptable in any country and civil society.

At present, more and more countries have expressed their support for the "One country, Two systems" principle in official statements, notes and public statements. They oppose external forces interfering in China's internal affairs and undermining Hong Kong's prosperity and stability, and hope that Hong Kong will restore stability and order.

We suggest that those Western politicians who are behind the violent and illegal offenses and endorse the anti-China elements to destabilize Hong Kong correct their wrong practices as soon as possible and stop adding fuel to the flames, otherwise they will only further annoy the international community and fall victim to violence in the end.

A wicked person is sure to bring destruction to himself. We advise those external forces to immediately stop meddling in Hong Kong affairs, and stop acting against the will of the people and the general trend.

The Chinese people do not believe in fallacy, nor are we afraid of evil forces. The only right choice for the external forces is to clearly understand the situation and stop their wrongdoings.