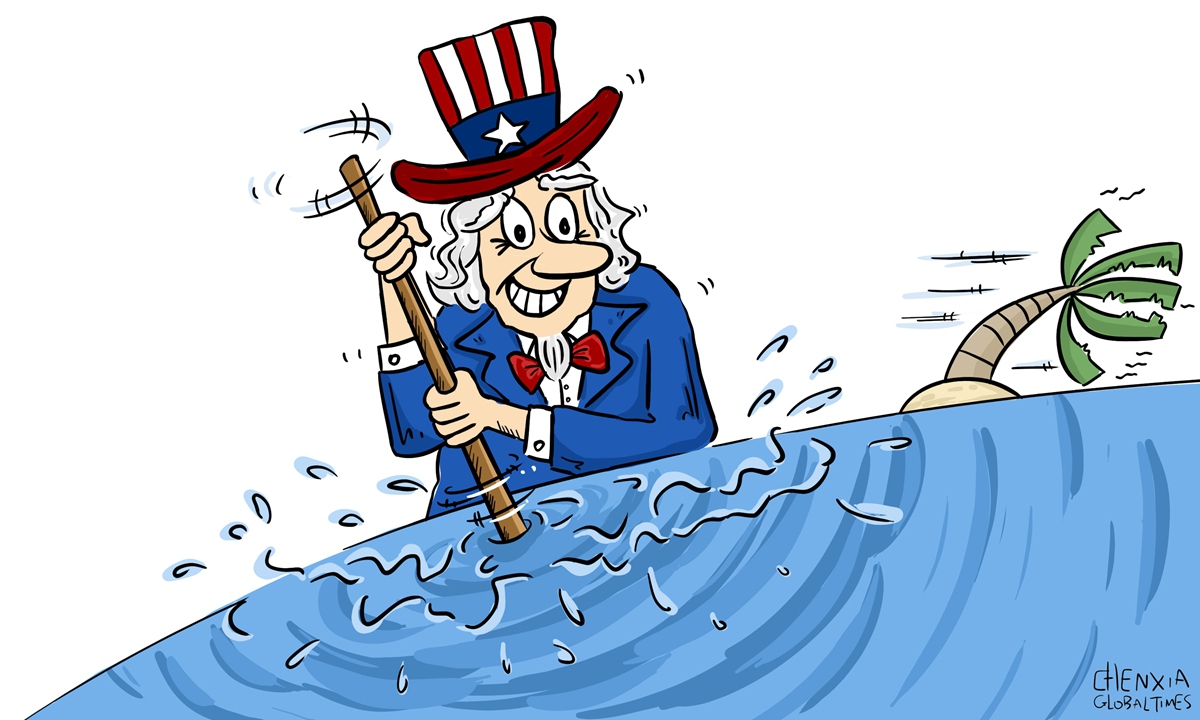 US Guided-missile destroyer USS Benfold trespassed in waters near the Meiji Reef in the South China Sea Wednesday without permission from China. The Chinese side mobilized aircraft and ships to warn off and expel the ship from the waters. In a 7th Fleet news release, the US side acknowledged that USS Benfold sailed within 12 nautical miles of Meiji Reef. But it said the warship was asserting navigational rights and freedoms. It claimed the Meiji reef "is not entitled to a territorial sea under international law," and "the land reclamation efforts, installations, and structures" built on the reef "do not change this characterization under international law."

China and the US don't agree on the nature of the 12 nautical miles of Meiji Reef. Other different views exist worldwide. But international law doesn't empower any country to challenge others' sovereign claim with an intrusion by a warship. The US in particular has no right to do so given the fact that it has not ratified the United Nations Convention on the Law of the Sea.

What the US has done is a naked provocation, and this is obvious to all. There are many Chinese people and facilities on Meiji Reef, and the US warship that sailed so close to it apparently posed a threat. The Chinese side cannot remain indifferent, but must take countermeasures. This is common sense.

The US policy to make waves in the South China Sea and instigate Vietnam and the Philippines to confront China has failed. It has become so exasperated that it crazily dispatched a warship to assert so-called freedom of navigation and trespass within 12 nautical miles of the Chinese reef.

The US warship came from afar to make provocations nearby the Chinese reef. It was in fact a declaration of the US hegemony. The conditions for such an action are that only Washington has the strength to do so, and even if other countries are upset, they can do nothing but bear the US' abuse of its hegemony. However, China has become stronger, which has undermined the abovementioned conditions. Therefore, the US provocations in the South China Sea are not only a hegemony declaration but also aim at strategically suppressing China. With China's approaches and abilities to resist such pressure growing, the risks that such US provocations will spark a maritime friction between China and the US will become higher and higher.

If Chinese warships go to US military bases in the Asia-Pacific and the US allies' coastlines to conduct close-in reconnaissance operations and declare freedom of navigation, and if South China Sea claimant countries also conduct such operations around islands and reefs occupied by other parties, will the world's maritime order be better or more chaotic?

Simply telling the truth to the US is not enough for China. China needs to take active actions and speed up the establishment of its ability to conduct close-in reconnaissance operations on the above-mentioned bases and coastlines. The rapid development of China's blue-water navy has made this possible. Only by making the US have a taste of its own medicine can we touch the nerves of the US and its allies, and reshape the Western world's understanding of US bullying in the South China Sea.

The US has deliberately provoked disputes in the South China Sea, and it must in turn endure the PLA's increasingly strong countermeasures against it. The game between the two sides will continue to go to an extreme. The US will definitely see the PLA show up at its doorstep in the not-too-distant future. And together with China, the US will face the uncertainty which is increasingly difficult to control - the two sides' warships and aircraft on the seas will carry huge mutual strategic hostility, and the two countries will not yield to each other.

While China is competing with the US at sea, it must also make preparations for military frictions when the two sides fail to control their disputes, as well as the possible large-scale military conflicts afterwards. Once the situation gets out of control and triggers military clash between China and the US, we must give full play to our home field advantage. China will definitely win once there is a war.