OPINIONS China won't be coerced by US' 'chip war' hype

China won't be coerced by US' 'chip war' hype 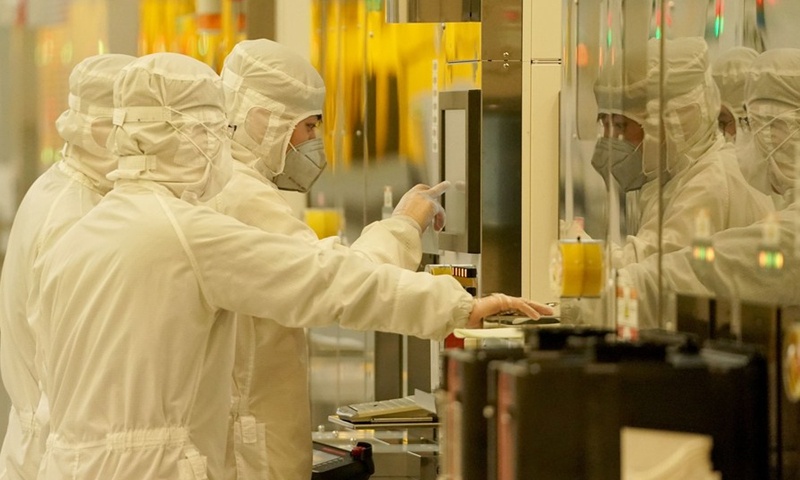 The Biden administration appears to gear up for a more localized semiconductor supply chain, adding fuel to the speculation about a high-stake "chip war" between the US and China.

The US Semiconductor Industry Association (SIA) has urged the Biden administration to offer more incentives to strengthen the country's semiconductor supply chain, according to a document the SIA submitted on Monday to the Department of Commerce. Just last week, US President Joe Biden unveiled a $2 trillion infrastructure plan, which specifically sets aside a $50 billion investment in semiconductor manufacturing and research.

Such desire to tighten grip on the chip industry could lead to a change in the current global semiconductor supply chain that is mainly concentrated in Asia. In this context, some media outlets began to hype up a looming US-China "chip war", claiming that the competition between the two countries over the global semiconductor supply chain will become increasingly fierce.

While the Biden administration claims that their recent efforts are aimed at addressing the chip shortage crisis and ensuring the security of supply chain, there were reports that Washington is committed to establishing a supply chain that excludes China. And that would be a regrettable development for both economies as well as the entire industry.

The current chip shortage facing the global auto industry and other electronics sector is a combined result of surging demand for chips, coronavirus pandemic and geopolitical tensions straining industrial chains. And the geopolitical implication of a potential "chip war" will only cause further disruption in relevant businesses and splinter global supply chains, inflicting heavy losses on both the US and China.

For a long time, the US has been at the upper stream of key technologies within the semiconductor industry. And it is particularly alarming to see US tech giants continues to tighten controls over the chip manufacturing and design, which has fueled speculation as to when the US will again use its hegemony to crack down on Chinese companies.

Last month, Intel announced plans to invest as much as $20 billion to build two chip plants in Arizona, in an aim to boost its chip manufacturing capacity. In September 2020, Nvidia announced to reach a deal with Softbank to acquire British chip designer Arm, which controls the world's most widely-used CPU instruction set architecture. The deal requires regulatory approval from various governments. Moreover, US chip equipment maker Applied Material originally planned to buy its Japanese peer Kokusai Electric, but the deal was terminated as it did not receive confirmation from Chinese regulators.

Yet, it should be pointed out that China won't be coerced by this hype. While it may take China a long time to develop its own cutting-edge semiconductor supply chain, China doesn't have to follow the same path to chip development as the US.

China is the largest market of the global semiconductor industry. The market space will allow it the room to develop the chip technologies and pursue cooperation with global players in spite of Washington's hegemonic obstruction. Any attempt to remove China from the value chain will hit a dead end.