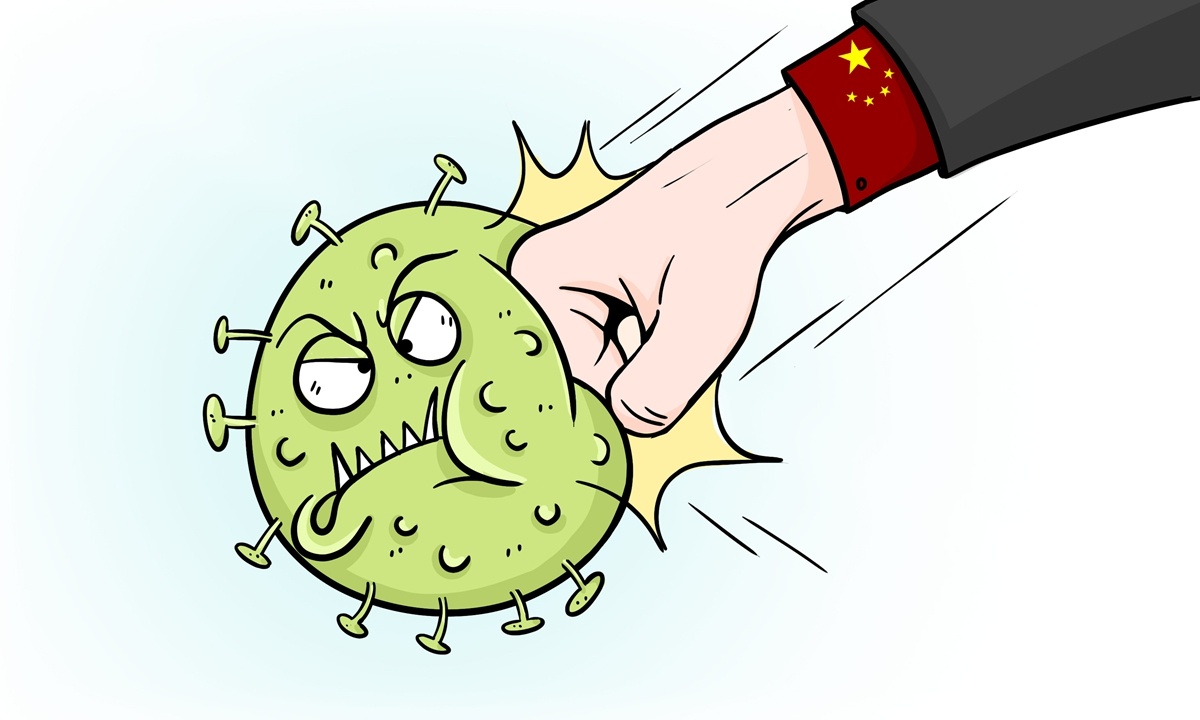 The US, India and many Western countries have failed completely in their scattergun efforts to combat the novel coronavirus, the result of which has been significant loss of human lives there. Nevertheless, they have recently started to question China's successful "zero COVID19 case" containment playbook, claiming it is too costly to economic growth and the lockdown is overly restrictive - limiting people's freedom to move out of their homes and have fun outdoors.

Their skewed logic is essentially that tens of thousands of deaths of their countrymen is acceptable, but a government should not cross the line of requiring close contacts of a confirmed Covid-19 patient to remain in quarantine for 14 days, or extra 7 days home observation as demanded by some Chinese cities.

In July, the highly transmissible Delta variant snuck into Nanjing, East China's Jiangsu Province, and has since spread to more than 15 provinces, causing the latest flare-up of the pandemic in China. Immediately, the US and Western media grabbed their chain to loudly assert that the Chinese government will face enormous difficulty in curbing the spread of the Delta variant, owing to its fast and often asymptomatic spread through a community.

Many overseas media outlets even claimed that now it is time for Beijing to rethink its approach to stifling the virus.

Should China give up its "zero COVID19 case" playbook, and start to "live in coexistence" with the virus, as suggested by the Western media? As the virus is still raging across the planet, and new mutations constantly emerge, the stakes are too high for a country of 1.4 billion people, the world's largest, with large swathes of the population living in high density urban environments, the perfect setting for uncontrolled spread of a virus.

China simply cannot and must not take the risk.

As long as the virus remains highly infectious and prevalent throughout China's neighboring countries and regions, this country cannot let its guard down, and must continue to do its best to resist new imported cases at the sea ports, airports and all border crossings. And, all designated hospitals treating coronavirus patients, including cases imported from abroad, need to heighten their level of readiness to guard against medical personal and cleaning workers from inadvertently becoming infected - as happened in Zhengzhou city, Henan Province.

It's important to get more people vaccinated, so as to prevent severe illnesses and fatalities. But considering what has occurred in the US where vaccination rate has reached over 50 percent, the sweeping Delta variant is causing new daily average infections to spike at more than 110,000 in the past week, tragically leading to more than 500 deaths per day. In India, the Delta variant has claimed more than 400,000 lives, and the actual number of deaths could be twice, according to media reports.

Chinese philosophy is that life overrides all else. In our minds, the government must do everything in its capacity to protect the lives of Chinese citizens, which explains why China bans personal ownership of firearms, and has enacted the strictest law against drug-trafficking.

It also explains why the country's top leadership made the swift and decisive order to shut down Wuhan city in January 2020 after learning the strange coronavirus outbreak could be as worse as SARS or even Ebola, and may quickly spread to other provinces if the city was not locked down. The government scrambled to set up more than 10 makeshift hospitals in Wuhan within a month, and rushed thousands of respiratory doctors and nurses from other provinces and the military to help deal with the abrupt health crisis. Wuhan's lockdown was lifted about two months later, and the country's economy quickly recovered.

The stay-at-home order enforced across China caused a precipitous 6.8 percent GDP dent for the first quarter of 2020, but from the Chinese government's perspective, the short-term economic loss was necessary, because it's a trade-off of at least one million precious lives.

After the virus was largely controlled, economic activity quickly returned and China was the only major economy reporting 2.3 percent year-over-year positive growth. That feat, containing the virus while fostering a rise in GDP, earned the ruling Communist Party of China (CPC) praise from the broader public.

Unfortunately, many countries, the US and India in particular, did not follow China's example, often using a combination of conflicting approaches. To prevent their economies from collapsing, the Trump and Biden administrations, as well as India's Narendra Modi government, never had the courage or vision to temporarily shut down their cities, towns and villages to filter out all positive cases, isolate their close contacts and cut off the contamination chain. Many Americans even refused to put on masks. The outcome has been clear for all to see.

After two weeks of proactive containment measures, including rounds of nucleic acid testing and lockdown of all risky communities, the latest Delta outbreak in China is basically under control, with only Yangzhou city, Jiangsu Province, still reporting around a dozen locally transmitted cases. Outbreaks in other cities have been largely stamped out.

In the past months, this country has witnessed sporadic virus outbreaks in Heilongjiang, Yunnan, Xinjiang, Beijing, Guangdong and Jiangsu, but all of them have been contained. The Chinese people are now at ease, no longer live in lingering agony of getting infected because they have a strong and capable government to protect them.

It is totally unnecessary for China to open a discussion about the pros and cons of the government's "zero COVID19 case" approach, as suggested by some epidemiologists. The 1.4 billion people have embraced the successful containment-based approach, and there is no way for the country to discard it, opening the doors to a new and chilling reality of wide-scale infections and deaths.