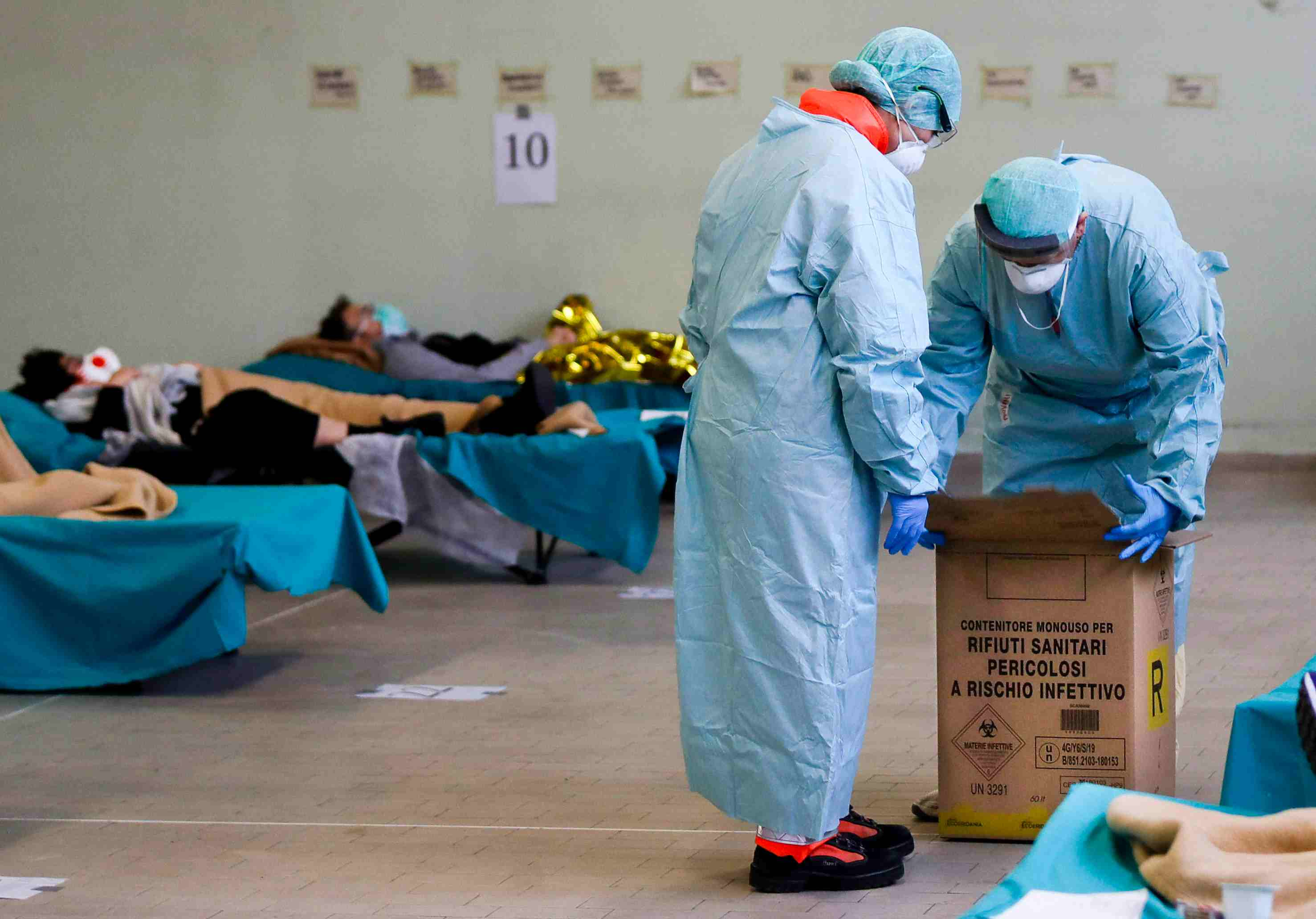 COVID-19 has spread far beyond China. The picture shows paramedics carrying a hazardous medical waste box as patients lie on camping beds, in one of the emergency structures that were set up to ease procedures at the Brescia hospital, northern Italy, Thursday, March 12, 2020. (Photo: AP)

"The viruses know no borders, and they don't care your ethnicity, the color of your skin or how much money you have in the banks," said Dr. Michael Ryan, executive director of the World Health Organization's (WHO) Emergencies Program, at a recent press briefing.

This isn't the first time the rhetoric of this sort has been uttered by authorities. In fact, from the moment COVID-19 attracted global attention, this has been the guideline that China and many global health officials abide by. And when the disease began to spread beyond the Chinese border, the Chinese government and people, despite having to manage a tough and rapidly evolving domestic health crisis, have donated millions of face masks or other medical equipment and dispatching expert teams to countries that are in need of assistance.

It is a bit jarring that some people would suggest, after what had transpired at the earlier stage of the outbreak, that China would refuse to lend a hand to certain countries like Denmark and Norway to help them combat the disease.

I dare say that even after these couple of months, which seemed like a lifetime, many Chinese still remember the image of stars on the Chinese national flag turned into viruses in a cartoon published by a Danish newspaper, or learning that their country, in a position of leadership, would be seen by Norway's most read online newspaper Verdens Gang as creating trouble for the world.

China remembers that after the Chinese Embassy in Denmark demanded apologies over this kind of behavior, ideas like "freedom of expression" were used by Danish Prime Minister Mette Fredeiksen to justify discriminatory rhetoric and actions. And yes, China remembers that certain factions in countries like Denmark and Norway, instead of offering their help, mocked and humiliated China at the height of the virus outbreak.

For countries that still can't shake off Cold War mentality, for those who live under the assumption that ideological and political divide could somehow land a physical barrier between people, the world has long moved on. Dr. Tedros, Director-General of WHO, warned the world in February that each country should prepare for outbreaks within their borders. The convenience of modern transportation and the globalization of culture and business dwarf any attempts to rewind the time. And a virus outbreak, like COVID-19, can easily be transmitted on a global scale.

And, to be frank, singling out people and politicians in countries like Denmark and Norway for their earlier actions might be unfair to them given some of the recent development. Since the COVID-19 began to spread in the United States, people are seeing more and more anti-China sentiment from senior government officials. They are either calling the disease "Chinese Virus" or blaming their failure to mount a proper response on China. And just like the Danish government refused to take responsibility, the U.S. government, including President Donald Trump, doesn't acknowledge this sort of rhetoric as racist and offensive. When the "leader of the free world" and his chief diplomat use their official positions to defend discrimination and brand China as the villain in the story, what could anyone expect from the country's allies and followers?

After all, a fish rots from the head. And when government stands behind it, these rhetoric and behaviors would only proliferate.

China doesn't seek to create ideological conformity, neither does it believes that any country alone could solve the crisis. If anything, the 2003 SARS outbreak has taught China that, in an international health crisis, no one can be spared or protected without the assistance of the international community. As China now confronts the reality that some of its overseas citizens who've come back are carrying the virus, helping other nations to contain the outbreak has become even more urgent.

And because it has the most experience in dealing with the COVID-19 outbreak, China hasn't held back in sharing its experience or providing assistance to the rest of the world. Dr. Zhong Nanshan, China's renowned respiratory expert, has conducted multiple video conferences with medical experts and authorities in Europe and the United States to share his experience on the front-line against COVID-19. As Japan struggled to keep a lid on the outbreak, China shipped over 5,000 sets of protective gear and 100,000 masks. When Serbia asked for help, China responded by providing test kits and medical professionals. And China is providing two million surgical masks, 200,000 N95 masks and 50,000 testing kits to the European Union.

The world is too interconnected to assume anyone can be immune to whatever's happening on the other side of the continent. It cannot be denied that the rhetoric, the mocking and the excuses did hurt China and that there are lingering effects among the public. But, in confronting a common enemy, one that no country might be lucky enough to escape from, China stands with those that are in need of assistance.

The virus makes no distinctions. Our future is a shared one.