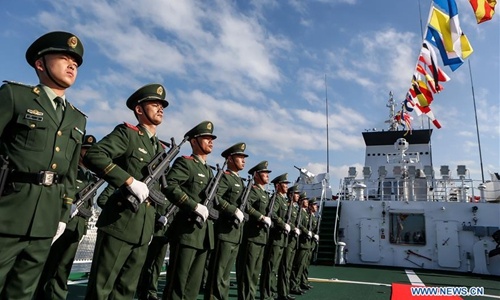 After the enforcement of China's Coast Guard Law, some foreign institutions and individuals made a fuss about provisions on the use of force. They argued that with the help of this law, the Chinese Coast Guard (CCG) will now use force recklessly, threatening the personal safety of fishermen from other countries and affecting regional stability. However, the truth is unlikely to be covered by lies. And facts always speak louder than words. Based on the actual cases, CCG can be regarded as a model of civilized law enforcement in the South China Sea.

At the end of November 2016, tropical storm Tokage raged in the South China Sea. A Philippine fishing boat sank in Xihu Lake on Huangyan Island. Two fishermen fell into the water, one of whom collapsed and needed immediate rescue. The CCG braved the huge storm, and overcame difficulties to arrive at the island. As soon as the two fishermen were transferred to the CCG vessel, the CCG arranged doctors onboard to treat them. They were provided with meals and spontaneously offered personal clothes and daily necessities. On December 2, China handed over these two fishermen to the Philippines at the agreed place. The Philippines was deeply grateful to China for its good deeds.

On April 2, 2020, a Vietnamese fishing boat intruded the waters under the jurisdiction of China. After being warned by the CCG many times, it made frequent dangerous actions, instead of leaving. Finally, it struck at a CCG vessel and sank. The CCG quickly released a boat to rescue rather than doing nothing. Without any casualties, all the eight Vietnamese were rescued and returned home safely.

On June 10, 2020, a similar case took place again. A Vietnamese fishing boat fled at a high speed in waters under Chinese jurisdiction in an attempt to evade the boarding inspection of CCG. During the process, the Vietnamese fishing boat swerved suddenly and collided with the CCG vessel, causing itself to roll and sea water to pour in. Three fishermen fell into the water. CCG immediately rescued the fishermen, and at the same time helped them repair their boats.

There are many other similar cases. As the largest law-enforcement force in the South China Sea, CCG has fully demonstrated its professional and civilized quality in the process of law enforcement. It has fully protected the legitimate rights and interests of the objects of law enforcement. Unfortunately, some people turn a blind eye to these facts. They make up all kinds of lies: such as "violent law enforcement", "no respect for human life" and "forced confession." Indeed, in recent years we have witnessed severe clashes between the maritime law-enforcement forces of some countries and the fishermen of other countries.

According to incomplete statistics by some scholars, during the first nine months of last year, one person died and four others were missing in the fishing conflict between Indonesia and Vietnam. On August 16 last year, a Vietnamese fishing boat collided with a Malaysian vessel of maritime law enforcement off the coast of Malaysia. The Vietnamese ship threw iron and gasoline incendiary bombs. In response, the Malaysian government shot and killed one fisherman, detaining another 12.

As China has repeatedly stressed, with the Coast Guard Law, China's maritime law-enforcement activities will be more scientific and standardized. When and what enforcement measures should be adopted are clearly written down. It is believed that the actions of the CCG can stand the test of and respond accordingly to questions from the outside world. Only time and facts will tell the true story.