BEIJING, March 3 (Xinhua) -- Every year, just before China's annual two sessions, there are voices in the West declaring that China's democracy cannot truly represent the people. But the Chinese people disagree.

Nearly 3,000 lawmakers and more than 2,000 political advisors are gathering in Beijing to forge consensus and pool wisdom for the building of a moderately prosperous society in all respects, the first of the country's two centenary goals. 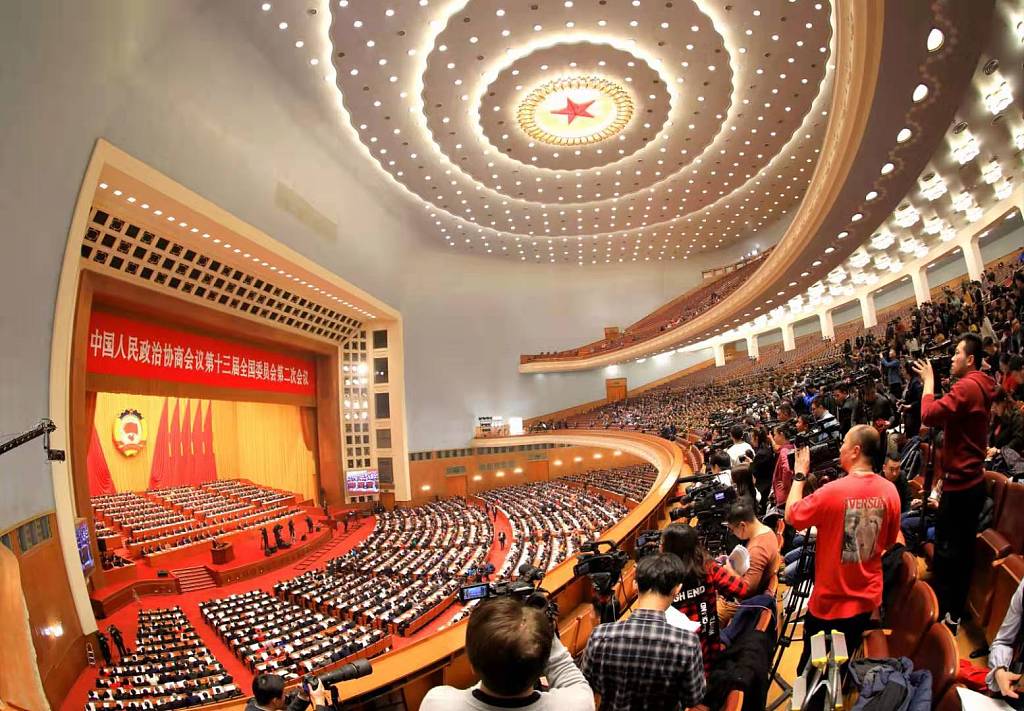 This is the mission of the annual sessions of the National People's Congress (NPC), and the National Committee of the Chinese People's Political Consultative Conference (CPPCC), two important platforms for China's own style of democracy.

Democracy is not a decoration, but a means of solving problems.

The true meaning of people's democracy is finding the best way to coordinate the aspirations and demands of the whole of society and making decisions that conform to the long-term interest of the people.

It is different from a system where some here-today-gone-tomorrow politicians obtain power in turn, often failing to keep their pre-elections promises.

To govern, in China, also means to serve.

While parties in the West increasingly represent special interest groups, Chinese democracy sees people, not capital, as the most important factor in society.

Chinese leaders are listening attentively to the people and responding to their demands.

The priorities of the Chinese government are how to keep the economy growing, provide better education, housing, environment, employment and healthcare for almost 1.4 billion people and maintaining social cohesion and peace and while achieving greater prosperity for all the people.

Over the past decades, China has been improving dramatically, not only economically but also ecologically, socially and culturally. China's independence, sovereignty, security and the interests of development are well safeguarded.

China's GDP has grown to 90 trillion yuan (13.4 trillion U.S. dollars), contributing about 30 percent of the world's economic growth. Now the country has the world's largest middle-income population. By 2020, there will be no extreme poverty in China. If this is not a proof of Chinese democracy at work, then what is?

China is a large country. Choosing the right path for its political progress is a fundamental and vital issue. The country began to learn about democracy a century ago, but soon found Western politics did not work here. Decades of turmoil and civil war followed.

It was after the founding of the People's Republic of China that the country developed its own style of democracy. The first session of the first CPPCC National Committee was held in 1949. The first NPC, the highest organ of state power, was convened in 1954. The two platforms have been witnessing the vitality of Chinese democracy under the leadership of the Communist Party of China.

The system is an integration of the leadership of the CPC, the running of the country by the people, and law-based governance, which is guaranteed by the effective implementation of "democratic centralism," the fundamental organizational principle of the CPC and the principle of China's political system as stipulated by the country's Constitution.

It ensures that the CPC's positions become the will of the country through legally established procedures, and on the other hand, the CPC acts within the scope of the country's Constitution and the law, and leads the people in effectively governing the country and engaging in democratic elections, consultations, decision-making, management, and oversight.

Rather than creating policy conundrums or delays -- as is often the case with parliaments in Western nations when the ruling party or coalition does not hold a majority -- the people's congress system lends support to and supervises the governments, supervision commissions, courts and procuratorates to achieve effective governance and rule of law.

The NPC is the  top legislative body. Lawmakers must learn about the most pressing needs of the people as well as national urgencies and push forward national policies. Deputies who fail to fulfill their duties lose their positions.

Chinese democracy also includes multi-level and institutionalized consultation. The CPPCC is an important organ for multiparty cooperation and political consultation led by the CPC.

The CPC and non-Communist parties cooperate with each other, working together for the advancement of socialism and striving to improve people's standard of living. The relationship maintains political stability and social harmony and ensures efficient policy making and implementation.

There are also various mechanisms available for the public to give input into policy making, including self-governance at the grassroots level such as village committees.

This reflects arrogance and self-indulgence, a warning signal that the model is in decline.

China wants to learn as much as possible from the West and work with the West. However, the Chinese are, just as many Westerners have become, wary of the deep troubles of a capital-manipulated and conflict-driven model of democracy.

China has never sought to export its system to other countries. Its example just shows there is more than one model of democracy in the world that can produce good governance.

If the West wants to retain and renew its values, it is time to stop judging other countries by Western norms and rules.

Democracy is a living organism. Any model that refuses to develop to meet the demands of time will only end up in the dust.