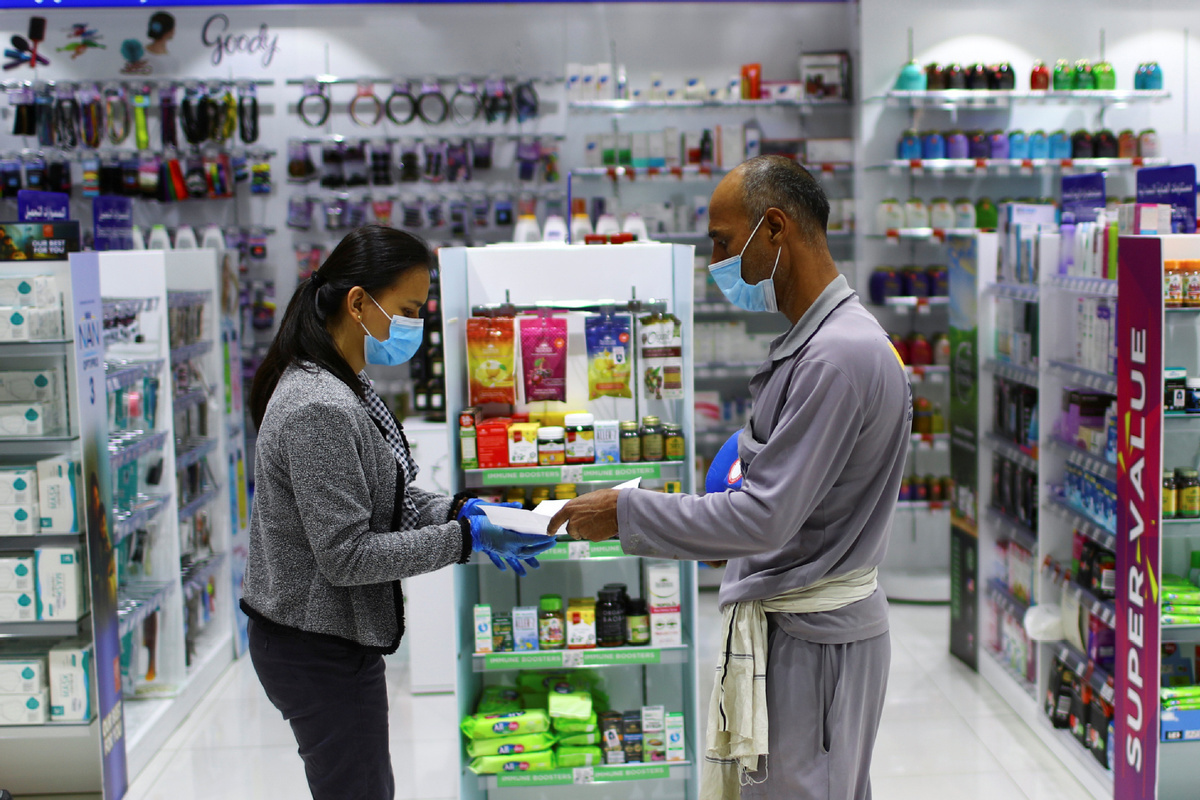 A worker wears a face mask as he hands-over the prescription to the pharmacist, during the 24 hour lockdown to counter the coronavirus (Covid-19) outbreak in Dubai, United Arab Emirates April 6, 2020. (Photo: Agencies)

Noting that China and the UAE are comprehensive strategic partners and have always trusted, supported and helped each other, Wang said that during the most difficult period in China's fight against the COVID-19 epidemic, the UAE expressed its sympathies and gave a helping hand.

The UAE's iconic landmark Burj Khalifa in Dubai was lit up in the colors of China's national flag, and illuminated with slogans in Chinese reading "Come on, Wuhan." Crown Prince of Abu Dhabi Sheikh Mohammed bin Zayed Al Nahyan also mourned "citizens and brave medical staff who lost their lives" in China's fight against COVID-19 on his official Twitter account.

These acts of kindness, Wang said, have demonstrated the UAE people's sincere feelings towards the Chinese people, for which the Chinese side expresses its appreciation and gratitude.

As the pandemic is spreading around the globe and when the UAE also faces rigorous challenges, China, he added, stands ready to provide as much help as it can to the UAE's fight against the outbreak, and will assist and facilitate its procurement and shipment of medical supplies from China, as well as share experience in preventing and controlling COVID-19.

Wang said the virus is a common enemy for humankind, and that China, as the first country to report the novel coronavirus epidemic, has been sharing information and carrying out cooperation in epidemic control with the international community in an open, transparent and responsible manner since the onset of the outbreak, and has made important contributions to stemming the virus's worldwide spread.

Some attempts recently to blame and stigmatize China are disgraceful, Wang said, adding that China appreciates the UAE's objective and fair stance on the issue.

A friend in need is a friend indeed, Wang said, adding China and the UAE will stand together firmly to defeat the pandemic and that the severe test of COVID-19 will further consolidate the friendship between the two countries.

For his part, Sheikh Abdullah said under the strong leadership of Chinese President Xi Jinping, China has taken a series of comprehensive and effective measures in a timely fashion, resulting in a big win in the effort to prevent and control the epidemic.

China has identified the COVID-19 pathogen in a record short time and shared the coronavirus's genetic sequence with the world, which has demonstrated China's advanced medical technology and responsible attitude, he said.

China, Sheikh Abdullah added, has ordered city lockdowns to contain the spread of the virus, which has shown a strong solidarity among the Chinese people.

China's anti-virus progress has proved once again that it is a great country with a thousands-year-old civilization and its people are great unyielding people, he said, adding that the progress also sets an example for other nations and brings hope to their people.

Without China's efforts and contribution, there would be a worse scenario of the virus's global spread, the UAE foreign minister said.

Sheikh Abdullah also expressed his gratitude for China's assistance in supplies and valuable experience, saying he believes that with China's strong support, the UAE will vanquish the epidemic at an early date and their bilateral ties would be solidified.