OPINIONS Chinese international students should condole tragedies by protecting themselves

Chinese international students should condole tragedies by protecting themselves

Chinese international students are significant demographic in the US, but just like any group, safety is not guaranteed. Many Chinese have a common misunderstanding of US society that causes them to underestimate the potential threats that exist in the US. One thing they should never forget is that when it comes to safety and security, it is up to each individual to safeguard their well-being at all times.

In January 2016, while enrolled at Arizona State University, Jiang Yue’s life ended when she was just 19. According to the Associated Press, the Chinese national was killed while on her way home by a stranger who had rear-ended her car while she waiting at an intersection for the light to change.

Holly Davis, a former drug addict who had been in and out of homeless shelters and treatment centers for the better part of her life, approached Jiang after she ran into her car, and shot Jiang several times. 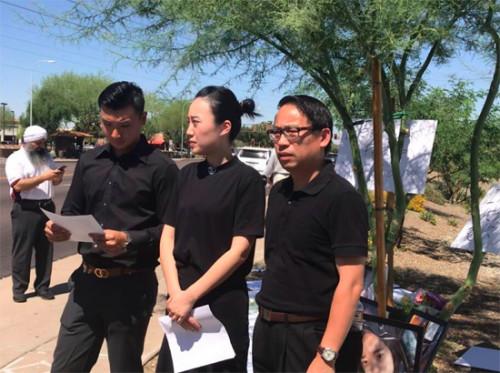 Shortly before the accident, Jiang’s boyfriend, Chen Endong, noticed a car behind them was swerving on the road. At one point, the car came to a full stop some distance away from an intersection where Jiang was waiting for a light to turn green.

When Chen got out of his girlfriend’s car to assess the damage, Davis confronted Chen and pointed a gun at him. Chen yelled and told Jiang to run, but she was still in shock from the accident. Unable to remain calm, Jiang missed her last opportunity to escape.

Davis approached Jiang while she was still in her car and shot her. Chen said Davis was a stranger, and that they never had any interaction with Davis’s car.

Even with such incriminating evidence in place, it wasn’t enough to make Davis pay for her crime, and this time justice wasn’t served.

Davis’ defense attorney, Alan Tavassoli, argued that his client was the result of life spent dealing with tragedy, abuse, homelessness, and was a recurring drug addict. But the truth was that Davis had stopped taking drugs two years prior to killing Jiang. She had also stopped taking her depression medication.

Tavasoli argued that Davis was a product of her environment and a “prime example of what drugs can do” to an individual. Her lawyer basically blamed Davis’ actions on her prior drug use, and not on Davis herself, as if that was a legitimate excuse.

To make matter worse, the prosecutor offered a plea deal without consulting Jiang’s family, which is a severe court violation.

Even if Davis; life had been as tragic as her lawyer argued, past experiences, regardless of how bad, do not excuse criminal behavior.

Jiang did not deserve to have her life ripped from Davis, because of Davis’ tragic life.

If Jiang could do it all over again and respond appropriately after being warned by Chen, she’d probably be alive. Although it is too late to offer suggestions, what we can do is hope that people learn from this tragic incident.

Remember, there are people out there capable of anything, so don’t ever place your safety in the hands of a stranger thinking that he or she could be a rational person.

It’s surprising the judge honored a plea deal that Jiang’s family had yet to approve. Jiang’s grieving family deserves sympathy, and most wish that the family sees that justice is served. Even the fairest ruling cannot make up for the loss of life or repair the damage to Jiang’s family.

For most, their only option would be to learn from Jiang’s tragic life to make sure something like that would never happen to them.

There have been many tragedies that have happened to Chinese international students in the US. Last year, Zhang Yingying, a visiting scholar at the University of Illinois Urbana-Champaign, was kidnapped and killed by a PhD candidate, Brendt Christensen. Zhang’s body is still missing, while Christensen is behind bars awaiting trial. In 2017, Guo Chenwei, a Chinese international student at the University of Utah, was shot dead while sitting in his car, the victim of a random act of violence.

In 2012, Wu Ying and Qu Ming, two graduate students at the University of Southern California, were down by 19-year old Javier Bolden and 20-year old Bryan Barnes, whom both were arrested two years later.

Especially for Chinese international students, being alone in a foreign country is difficult not including additional obstacles such as the language barrier and culture shock.

To stay alive, the best thing one can do is to have a clear understanding of security and your environment. Always be prepared to the worst-case scenario. If anything, contact the nearest Chinese Consulate for assistance.

One last thing, some worry and care about you. They would cry endlessly if something happened to you. For their sake, and your own, protect yourself. Avoid danger at all costs because some people out there are waiting to catch you off guard.