OPINIONS Chinese people are happy, but some Westerners hate to admit it

Chinese people are happy, but some Westerners hate to admit it 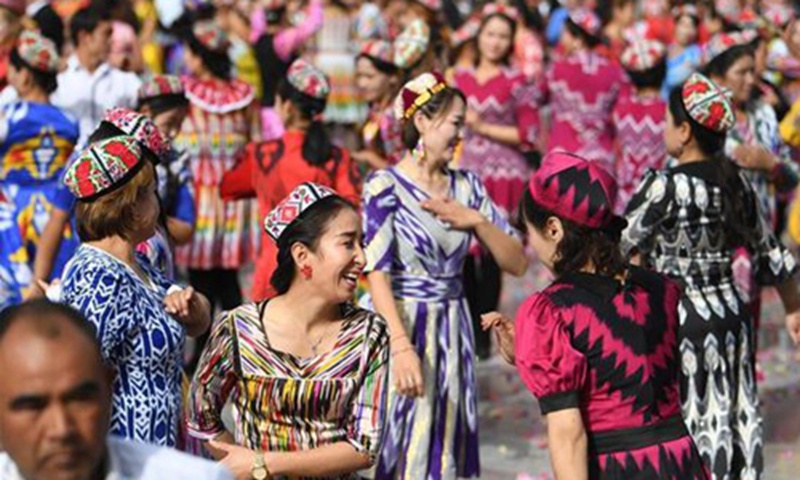 "Is China The Happiest Country in The World?" polygraph.info, a fact-checking website produced by Voice of America and Radio Free Europe/Radio Liberty, raised the question on Sunday. In its analysis, the media outlet lists a series of factors, including Xinjiang affairs, environmental pollution and the COVID-19 epidemic, which it believes could make Chinese people feel unhappy.

Quoting an Ipsos survey released on October 7, which suggested that Chinese were the happiest citizens "in a COVID world" of the 27 nations surveyed, the article argued this is "misleading" as other reports "paint a very different picture."

Its arguments were nothing new, even without any reality presented. It tried hard to link "detention camps" and "forced labor" in Northwest China's Xinjiang Uygur Autonomous Region, China's "carbon dioxide emissions" and the COVID-19 epidemic with Chinese people's happiness levels. It also cited a July report by the UK's Imperial College claiming China's average satisfaction score over their current lives was the second lowest, while the figure for the US is way higher, without noting the latter has the most novel coronavirus cases in the world - over 8.1 million as of the press time.

Such a commentary showed no respect to the fact that Xinjiang has got rid of frequent violent terrorist attacks in the past years while restoring peace and prosperity, and China has made enormous environmental protection efforts and achievements, which even a growing number of mainstream Western media outlets have started to acknowledge is worth praising. In terms of the fight against COVID-19, if the satisfaction score of the Chinese people is one of the lowest, perhaps no citizen from across the world would truly feel satisfied.

On Monday, China's National Bureau of Statistics announced that the country's GDP grew by 4.9 percent in the third quarter compared with a year earlier. The positive growth shows China's confidence and momentum in its economic recovery amid the public health crisis, and even Bloomberg called China "world's only major growth engine."

The persons and organizations, which assert Chinese people do not feel happy, could hardly provide any convincing opinion poll results. They have tried hard to utilize marginalized emotional and radical rhetoric on the internet as mainstream voices, in an attempt to prove their stereotypes about China.

The Chinese are more upbeat than before, just like Americans when the US was rising. The Chinese people know that China still lags behind developed countries in a wide range of fields and are well aware of their own issues. But they have confidence in tackling the stumbling blocks on their way. That is how China has developed to where it is today - making strides by resolving problems - which is in sharp contrast to the way the US and some other Western countries handle the crisis.

The epidemic has greatly boosted Chinese people's confidence in their country's national governance and political system. After going through the crisis, they have become more optimistic about the future, while the corresponding mood and morale is gloomy in Western societies.

Some Western elites just could not stand seeing Chinese people feel happy. They choose to cover up their own issues and disappointment by cursing China or even twisting results of opinion polls. Unfortunately, doing so will not help them turn the tables. Being a part of the West, once so strong, they are not supposed, and accustomed as well, to degenerate like this.