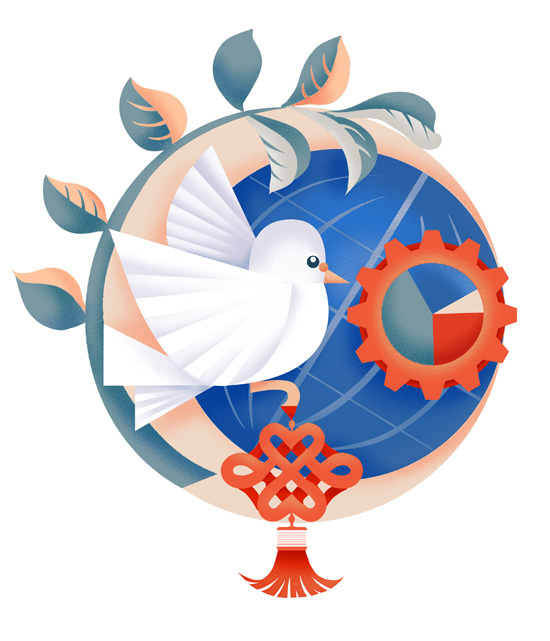 The Chinese renaissance provides a golden opportunity for the world. For the past 200 years, the world has been dominated by one civilization, the West, in one way or another. In this period, the West has done both harm and good. It harmed the world with its brutal policies of conquest and colonization.

China experienced it too with the two Opium Wars and the savage sacking of the Old Summer Palace in 1860. Yet, over time, the West also shared some of the pillars of Western wisdom with the world. These included free market economics, science and technology, meritocracy, pragmatism, culture of peace, rule of law, and education.

Given the painful century of humiliation that China suffered from 1842 to 1949, it would have been perfectly reasonable for China to emerge as an angry country determined to avenge past misdeeds against it. Instead China wisely committed itself to "peaceful development".

In 2019, the annual sessions of the National People's Congress and the National Committee of the Chinese People's Political Consultative Conference declared,"China has once again renewed its pledge to the rest of the world that it will always take the path of peaceful development and stay committed to promoting common prosperity for all countries".

Many in the West are skeptical of China's claim that it has committed itself to a peaceful return. Yet the data back up this claim. There are five permanent UN Security Council members－China, France, Russia, the United Kingdom and the United States. The only one among these five powers that has not fought a war in four decades is China. Indeed, the Chinese military has not fired a shot since its naval skirmish with Vietnamese naval forces in 1989.

However, this commitment to avoid wars was also expressed by other Chinese philosophers. A popular proverb says that a country should not send its best people into the military:"Good boys do not become soldiers; good iron is not used to make nails".

Confucius also downplayed the importance of weaponry. He said, when asked about what was required of the government, "Enough food, enough weapons and the confidence of (trust from) the people". And when asked,"Suppose you had no alternative but to give up one of these three, which one would you let go of first?", the master said, "weapons".

Despite China's impressive track record of avoiding war and conflict in recent decades, many in the West remain skeptical. They continue to claim that China is becoming militarily expansionist. For instance, The Economist wrote in 2019: Not so long ago China called America imperialist for operating foreign military bases. In 2017 China opened an overseas naval base of its own, in the African country of Djibouti (...) Hawkish Americans (...) point to such acts as China's construction of airbases and missile batteries on disputed reefs in the South China Sea and see aggression and swaggering confidence.

Future historians will be puzzled by this claim of Chinese aggression. If China had a militarily expansionist gene, it has had many opportunities to exercise it before.

Over the past 2,000 years, China has often been the single strongest civilization on the Eurasian landmass. If China was inherently militaristic, it would have conquered territories overseas, as the European powers did.

Also, future historians will marvel at the fact that even though Australia is geographically close to China, it was physically occupied and conquered by far more distant British forces. This Chinese reluctance to conquer Australia and other overseas territories is not because China always lacked a navy. Before the Portuguese and Spanish began the ruthless European policies of colonizing the world in the 16th century, the Chinese had by far the strongest navy in the world.

At the start of the 15th century, nearly 100 years before Christopher Columbus tried to find a route to the so-called Spice Islands, China sent out seven naval expeditions under the leadership of Admiral Zheng He, a legendary Chinese figure. Yet China did not conquer or occupy any overseas or distant territories.

China's peaceful record stands out when it is compared with that of the US. The US has been involved in military conflicts every year from 1990, at least. It has dropped bombs on many countries. In 2016, in the last year of the Barack Obama presidency, the US dropped 26,172 bombs on seven countries, according to research by the Council on Foreign Relations. The record shows that Western countries have unwisely become trigger-happy in recent decades, opting for military solutions over diplomatic solutions to conflicts.

Fortunately, there are also oases of peace in the West. When it comes to issues of war and peace, the European Union may well provide the gold standard for the world to follow. Given the many wars that European countries have fought against each other, including major European countries such as France, Germany, Spain and the UK, it is amazing that these European countries don't just enjoy zero wars among each other, they also enjoy zero prospect of war between any two members of the EU. No other region in the world, not even the Association of Southeast Asian Nations, comes close.

Given the recent peaceful record of China and the EU, an opportunity presents itself for a deep dialogue between China and Europe on the deeper sources of peace. Both Chinese and European contemporary philosophers should sit together to compare notes on the wisdom contained in the ancient writings of their great philosophers.

Undoubtedly, the sharing of this wisdom will help to generate an even more peaceful world. This is one great opportunity that has surfaced from the renaissance of Chinese civilization.

The author is a distinguished fellow at the National University of Singapore's Asia Research Institute.