OPINIONS Chinese: The language you must learn

Chinese: The language you must learn 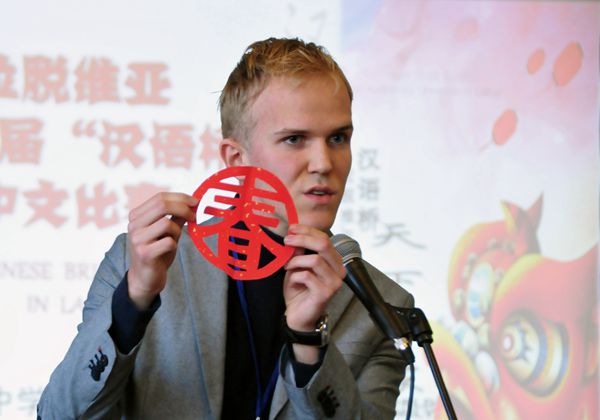 A student shows a papercut work during the 16th Chinese Bridge Chinese proficiency contest in University of Latvia in Riga, Latvia, on April 13, 2019. The 16th Chinese Bridge, an annual Chinese proficiency contest for school kids, college students and adult learners of Chinese, was held at the University of Latvia Friday and Saturday. (Photo: Xinhua)

If you have a passion for learning languages, you must start learning Chinese. English is the most widely spoken language in the world and it is the predominant language in all fields. But it is expected that Chinese, which is one of the six official languages of the United Nations, will be the most important language in the coming years. What are the reasons behind the rapid spread of this language and why should you learn it?

My desire to learn languages was the reason I studied many Latin languages and, in the process, deepened my knowledge of the languages and literature. At the end of my studies, I received the title of translator and linguist. However, I did not feel self-sufficient from this knowledge. I acquired a lot of information about the Western world, especially Europe and America, as well as Middle Eastern societies. But my thinking was always about Asian civilizations. I always felt I needed to learn Chinese to be a global citizen because “without learning Chinese, we see with one eye”.

Today I am writing this article from China, and the idea that has long been a dream for me -- to learn Chinese -- is now a reality. I am on my way to becoming a global citizen. Through my experience, I can say that Chinese is not as difficult a language as you might think. You just need two things: Believe in yourself and love the Chinese language.

My work in translation and my contacts with many international organizations and government institutions convinced me that Chinese is one of the most important languages of our time. After visiting the world's most celebrated capitals such as Paris and London, I discovered that there is a great emphasis on the Chinese language in these places. In the metro in Paris, you will hear instructions in French, English and Chinese. In London, for example, the Chinese language was introduced for instruction in schools.

Governments are also interested in the Chinese language because learning Chinese means opening up to China. In a remarkable initiative, the Saudi Crown Prince, Prince Mohammed bin Salman, has included Chinese as a course at all levels of education in Saudi schools and universities. This initiative is a Saudi recognition of China's economic, scientific and cultural strengths, as well as encouraging Saudi citizens to learn more about Chinese culture, thus bringing the two countries closer.

No doubt you will feel strange when you begin to learn the Chinese language because it consists of characters, unlike other languages that are composed of letters. But do not be afraid. Through pinyin you will be able to read Chinese phrases in Latin letters, so learning the language will be faster. For example, "Hello" in Chinese is “你好”, and by using the pinyin you will read it as “Nǐ hǎo”. Another thing is that the Chinese people are social and love foreigners, so living in China or having Chinese friends in your home country can offer you a good opportunity to develop your Chinese language skills.

Learning Chinese means opening up to one of the world's oldest civilizations. It’s also a lot of fun when you write Chinese characters, so you'll feel like a creative person. Chinese is a beautiful language, just like the melodies of music, because it contains four tones, and words can have more than one meaning according to the context. The language also has no masculine or feminine, and no plural or singular. But you have to have a strong memory because the Chinese language contains about 6,000 characters and each character is a word, written from left to right and from top to bottom.

But the question remains: Why should I learn Chinese instead of another language like French or German? If you cannot learn many languages then it is better to give more attention to Chinese because it is not similar to other languages and also because it needs more time to learn.

Globalization and vast technological development have not been able to limit the development of one of the world's oldest languages. Despite all the cultural and geographical barriers, Chinese is widely spoken today. This is due to the direct economic growth and the need for the world to have diplomatic, economic, cultural and social ties.

China's important economic role in Africa, Asia and Latin America has made the people of these regions love the Chinese language. Many young people in Europe and North America are also willing to learn Chinese and know more about Chinese culture.

In Great Britain, the queen and prime minister welcomed the idea of teaching Chinese. A study showed that 51 percent of parents in Britain hoped their children would learn Chinese. Former British prime minister David Cameron said children should not only study French and German, but also study Chinese. The current British Prime Minister Theresa May has good relations with the Chinese community in Britain and has appeared in traditional Chinese dress during Spring Festival in 2017.

China is an important political and economic state because it is witnessing unprecedented economic progress. The world is watching China in astonishment, and this peaceful Chinese rise prompts us to focus on learning the Chinese language and knowing more about Chinese culture. China is also closer today thanks to overseas Chinese communities, where you can discover more about Chinese people and Chinese culture.

To be a global citizen these days, I would advise you to learn Chinese. It will add more beauty to your life and allow you to better understand Chinese civilization.

Mohamad Zreik is a PhD candidate at the School of Politics and International Studies, Central China Normal University, Wuhan, Hubei, China. His research focuses on the Belt and Road Initiative and the Chinese presence in the Middle East, especially in Lebanon.