OPINIONS Chinese vaccines arrive in Chile in the nick of time

Chinese vaccines arrive in Chile in the nick of time 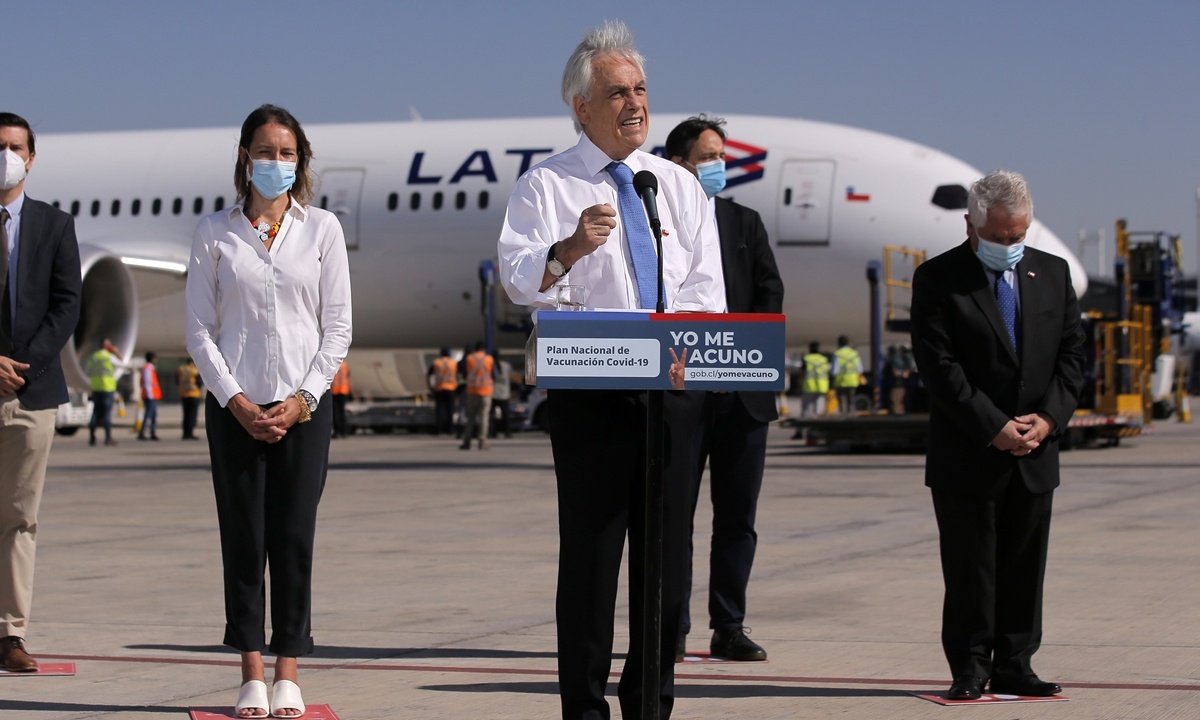 Two million doses of Sinovac vaccines arrived in Chile on January 28, with another two million doses expected to arrive on 31 January. They will be administered to people over 60 years old in the next few weeks. The fact that President Sebastián Piñera was at Santiago´s international airport at the arrival of the vaccines, reflects the significance the Chilean government attaches to vaccines. The country has been badly hit by the COVID-19 virus.

As the region’s most developed country, with the best Human Development Indicators (HDI), and an advanced health care system, many expected that Chile would deal with the pandemic more effectively than its neighbors, yet that has not been the case. With some 715,000 cases and 18,000 deaths so far, Chile has struggled to overcome the virus. According to a recent ranking by the Lowy Institute, Chile ranks 89 out of 98 countries in terms of its pandemic management—better than Brazil (98), Mexico (97) and Colombia (96), but otherwise in a pretty dismal position for country used to heading international rankings, not at the tail end of them.

To be fair, with a few exceptions, Latin America as a whole has badly mismanaged the pandemic. With 8 percent of the world’s population, Latin America had 500,000 deaths from the virus in 2020, about 28 percent of all fatalities. Although new variants are emerging now, in 2020 the virus was basically the same everywhere, and the reasons for this extraordinary disparity in the impact in the region are not obvious. And this impact is not restricted to the health sphere. As the United Nations Economic Commission for Latin America and the Caribbean (ECLAC) has noted, Latin America, as a result of the pandemic, is presently undergoing its deepest crisis in a century, as its GDP fell by 8 per cent in 2020 ( the worst performance of any region). Growth projections for 2021 will be among the lowest, and the region may be in for another “lost decade,” as was the case in the 1980s. Per capita income has shrunk to the levels of 2010, and the poverty rate, at 37 percent, is back to where it was in 2006.

Labor informality, cramped living quarters and existing social inequality, as well as the challenge and uncertainties inherent in dealing with a new virus, contributed to this devastating situation. Yet, as Pía Riggirozzi has observed, a key part of the reason for this debacle has to do with the response of Latin American governments, that first misjudged and then mishandled the situation, displaying both denialism and political opportunism.

Especially in countries like Brazil and Mexico, but also in many others, this denialism has led some to say that the virus does not exist, or that it is no more than the simple flu.

In addition to denialism, there has been political opportunism of the worst kind—meaning strategies to contain the pandemic guided by what seems politically expedient rather than by what science recommends. The haphazard ordering and lifting of lockdowns, and the locations and perimeters of the latter are Exhibit A of this erratic behavior that has wrought much havoc.

Most egregious, perhaps, has been the way in which the pandemic has underlined the lack of regional cooperation and coordination. Although not too long ago, entities like UNASUR and MERCOSUR had in place regional health protocols and agreements that might have helped to prevent some of the worst effects of the pandemic, they were all ignored, as an “everyone for themselves” attitude prevailed. Borders closed from one day to the next, tens of thousands of travelers stranded in airports around the world for months on end, and governments publicly comparing their respective COVID statistics, provided a rather sorry spectacle of incompetence and ineffectiveness.

Let us hope that, now that Chile has a significant stock of vaccines, its full application throughout the territory, expected to be completed by mid-year, will allow it to emerge with renewed brio from what has been a most trying and difficult period. Let us also hope that the COVAX Facility of the World Health Organization, of which Chile is a part, also manages to get vaccines to all countries in Latin America. Many don’t have them yet, and the challenge at hand is to eradicate the virus everywhere.

The author is research professor at the Pardee School of Global Studies, Boston University, a Wilson Center global fellow, and a non-resident senior research fellow at the Center for China and Globalization (CCG) in Beijing.