OPINIONS Chinese voters make a difference in US

Chinese voters make a difference in US 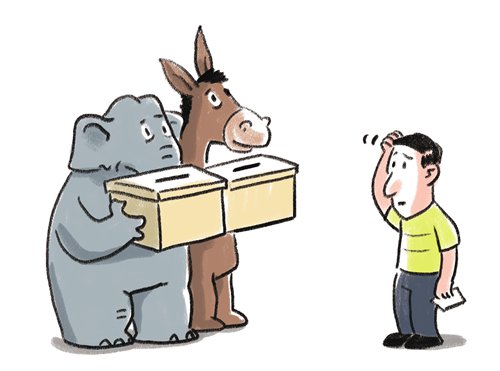 On August 5, more than 200 Chinese voters gathered at a fundraising event for a primary in the New York State Senate district 11 local election, an area in which Asian voters make up a whopping 30 percent of the population.

The primary battle scheduled for September is between John Liu, former New York City comptroller and a political superstar in the Chinese community, and Tony Avella, the incumbent Senator who is white and, until recently, not a familiar name for most Chinese.

But on that day, the voters were there not for Liu but for Avella, a switch that was previously unimaginable. In previous battles, Liu had received almost unanimous support from the Chinese community.

Many Chinese who attended the event have never voted before and some don't really know the difference between an Assemblyman and a Senator. What brought them there was the furor set off by New York City Mayor Bill de Blasio's controversial plan aimed at phasing out the SHSAT, the single test that decides admission into quality specialized high schools.

Chinese students are good at the test and many parents consider an admission into such schools to be a stepping stone to Ivy League universities. But the liberal mayor hopes his plan can send more black and Hispanic students to the elite schools. That would almost certainly come at a cost to Asian students who currently dominate at the best specialized schools.

Liu has long been calling for a holistic admission policy that includes but is not limited to the test scores while Avella made it clear that he thinks the current test-dominated policy should remain.

While the Mayor, Liu and Avella are all Democrats, Avella has joined a dissident faction in the State Senate called Independent Democratic Conference that has worked closely with the Republicans.

This turns out to be an important reason why many Chinese voters prefer Avella. Indeed, in an ad hoc WeChat group named "Keep SHSAT" its 500 Chinese members have been talking about voting for Republicans in November elections. They believe a Republican-controlled state legislative body won't pass the Mayor's schools admissions plan that gives more weight to racial representation than to test scores.

This isn't only happening at the local level. The number of Chinese voters who support President Donald Trump is growing, too. A WeChat group of Chinese Trump supporters that was formed during the 2016 presidential election has grown from the original 200 or so members to about 500. They even changed the name of the group from "Chinese Americans for Trump" to "Americans for Trump," a declaration that they represent mainstream America rather than an ethnic enclave.

Daniel Lou, the founder of the group, told me that the admiration and appreciation among members for Trump has skyrocketed, especially after Trump in July rescinded Obama-era guidance for colleges and public schools to consider race in admissions. Many Chinese felt those rules discriminated against their children who would be able to get high scores to get into top universities and would only lose out if race were a factor.

Asian voters have voted predominantly for Democrats in elections in the past. In the last presidential election, for example, 79 percent of Asian Americans voted for Hillary Clinton, and 18 percent for Trump, according to a survey by the Asian American Legal Defense and Education Fund.

The preference is not hard to understand. Older generations of Chinese immigrants and American-born Chinese have suffered a lot as minorities on the edges of society. They are more likely to agree with Democratic views that are sympathetic to the downtrodden and struggling.

But the awakening of political consciousness among new Chinese immigrants may be changing the picture. These people who grew up in the highly competitive environment of China are well educated and better off than the earlier waves of migrants. They want quality of life and don't need to fight for survival.

These people either didn't vote before or only voted Democrats because that was what their community did. But a slew of incidents in recent years from the controversy over school admissions policy to the wrestling over the decision to put less-than-desirable detention centers and homeless centers in Chinese neighborhoods helped them conclude that gains by other minorities can come at their expense. They see their interests aligned more with mainstream whites than minorities and are prepared to vote Republicans to protect their own interests.

So far, neither the Republican Party nor the Democratic Party has paid much attention to this largely untapped political constituency. Not a surprise. Asian voters only make up 4 percent of the American electorate and 7 percent in New York. Chinese voters make up even smaller numbers. But in a tight election, this fraction can make a difference, even without considering the donations they can make.

In the scorching political climate of the US where the two parties are desperate to grasp control of the White House and Congress, it may be a mistake to overlook these new voters.