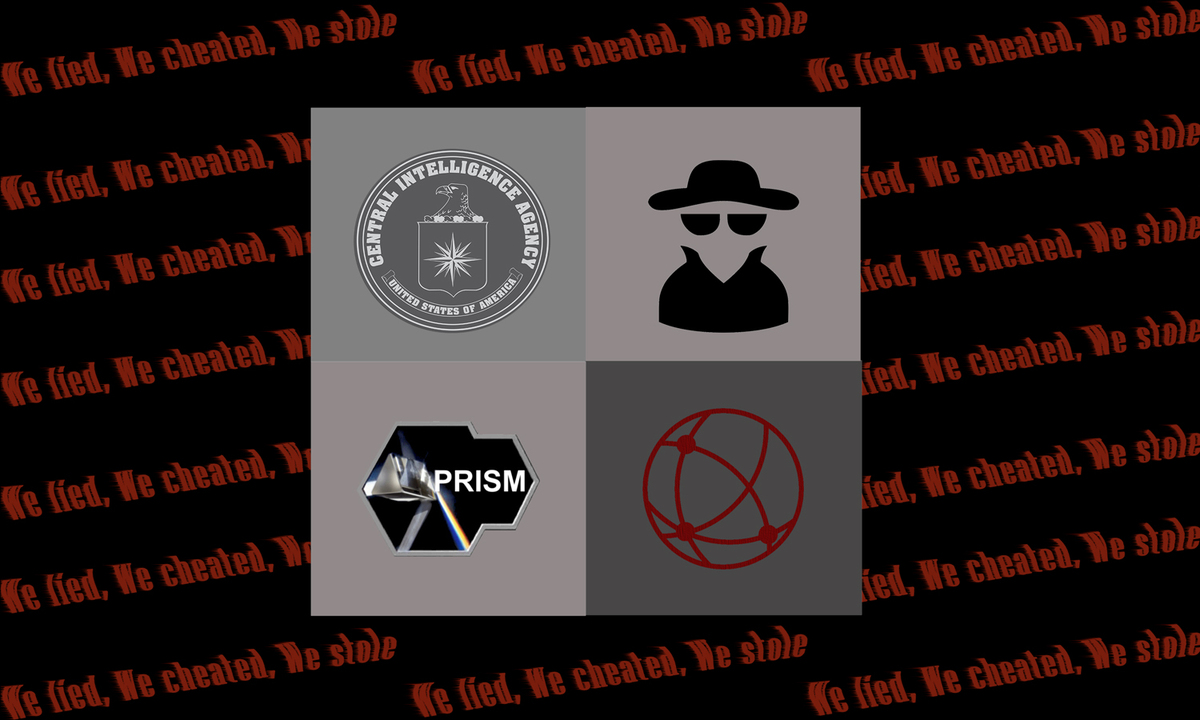 Late last month, something very odd happened. The CIA, via a secret cable, sent a chilling message to its stations and bases operating around the world, warning them the stark reality that too many foreign spies planted by the spy agency in other nations have been jailed, killed, or "compromised." The memo, first revealed by the New York Times, presents an unlikely confession and a rare exposé of the spying web weaved by the agency, which, since its founding in 1947, have deployed every dirty trick in the book—lying, cheating, stealing—to conduct its global eavesdropping operations.

Despite the fact that the CIA is losing ground in some places and running into difficulties with its spy recruitment efforts, the agency is revving up its spying engines to take aim at China. On October 7, the CIA announced it will establish a new China Mission Center, which, as CIA Director William Burns claimed , is designed to counter the so-called "most important geopolitical threat" facing the US—the all-purpose "China threat."

That the US is gripped with the so-called "China threat" is nothing new. After all, countering China has long been a foolproof tool for American politicians to rally voters' support, divert public attention, and get bills passed, and also the perfect excuse for the warlike nation to form small cliques, boost its military presence, and redouble its sales of weapons (including stealing allies' arms deals).

But still, setting up a spying mission center specifically targeting another country is an evil deed that simply crosses the red line for any bilateral relations. The unprecedented move will not only undermine an already fragile mutual trust, which forms the very foundation of the world's most important bilateral relations, but also risks stoking worldwide paranoia and distrust towards the ill-behaved superpower.

US politicians and media outlets have long brazenly defended and justified the CIA's misdeeds. Referring to foreign spies as "talented patriots," Mike Pompeo, the former US secretary of state and CIA director who improvised the famous CIA mantra of "We lied; We cheated; We stole", said back in May that, "We can't afford to risk our national security to appease some liberal, woke agenda."

Upon the announcement of the new mission center, a salvo of news reports has been unleashed to falsely portray the CIA's latest spying agenda as a "reasonable" and defensive measure: eg, an article from the New York Post was titled CIA creates 'China Mission Center' amid rising threats, while an NPR title read With the China Mission Center, the CIA refocuses on the changing world stage. It seems that the US, a nation that piles up, sells, and fires off the greatest bulk of weapons and maintains the most pervasive and intimidating military and intelligence presence worldwide, is playing the victim card to whitewash the CIA's nasty undercover mission.

CNN went even further and suggested that China's anti-spying drive in response to the CIA's China mission center was an overreaction. In an article published on October 18, the cable news network associated China's anti-spying campaign with "political witch hunts" and claimed that "Given Beijing's extremely broad and vague definition of 'national security,' anyone deemed 'unpatriotic' is at risk of infringing it and being reported as a 'spy'."

Funny that US media outlets have brought up such a notion as "national security," since by establishing a targeted spying mission center the US is openly attempting to impair other nations' national security. Equally absurd is that CNN dares to characterize China's definition of national security as "extremely broad and vague," because the nation that has cited groundless national security "concerns" to bully Chinese tech companies out of competition and suppressed academic exchanges and industrial cooperation is none other than the US.

For decades, the CIA, with its overreaching and omnipresent tentacles, has carried out its despicable spying mission in the name of protecting America's own national security. Throughout this process, the spy agency did not have any scruples about committing human rights violations (e.g., using waterboarding and other forms of torture in interrogations) and has never hesitated to cripple other countries' own national security (with even US allies not being exempt) while sabotaging regional stability.

Such misdeeds by the CIA are just too numerous to count. The following is just a brief reminder of the CIA's inglorious record:

Guatemalan coup d'état, 1954: Just seven years after its founding, the CIA carried out the notorious 1954 Guatemalan coup d'état, overthrowing the Guatemalan government that was formed after the nation's first democratic election, a move that subsequently sowed the seed of grudges and anti-US sentiment in Latin America that still lingers up to this day.

Operation Wappen, 1957: Following a failed coup orchestrated by the spy agency in Syria in 1954, the CIA staged a comeback three years later, only to be defused again by the Syrian government. The US government and media later denied the accusation of a coup attempt and instead slammed Syria for being provocative, and invoked the "Eisenhower Doctrine " in retaliation against the Middle Eastern country.

Failed CIA coup attempt against Indonesia, 1958: On September 25, 1957, Dwight Eisenhower, then US president, ordered the CIA to overthrow the Sukarno government of Indonesia. The plot was later exposed by the Soviet Union and eventually failed. To justify the coup attempt, the CIA claimed that Indonesia at the time was being dragged down by economic deterioration and national division under the governance of Sukarno.

Operation Cyclone, 1979-1989: Deemed one of the longest and most expensive covert CIA operations, Operation Cyclone is the code name for the CIA's decade-long operation to overthrow the Afghan government. With ever-growing funding, arms sales, and provocative military moves that didn't cease and desist until this year, the CIA, together with the US army and US-allied forces, inflicted a tremendous human toll and untold sufferings.

DBACHILLES, 1992-1996: Prior to the Iraq War, the CIA plotted a coup d'état operation against the Iraqi government. Code named DBACHILLES and directed by the CIA, the operation involved a government-backed sabotage and bombing campaign, which killed multiple civilians, including a number of people at a crowded theater.

Iraq War, 2003-2011: After the 9/11 attacks, the Bush Administration claimed that Saddam Hussein, then Iraqi president, was linked with the terrorist group Al-Qaeda and accused the Iraqi government of possessing weapons of mass destruction (WMD). A US-led military force subsequently invaded Iraq, leading to at least 460,000 direct and indirect deaths. However, after the grueling war came to a gory end, the purported WMDs, along with "Saddam's anthrax" that was partly contained in a vial presented by the late Colin Powell, then US Secretary of State, were nowhere to be found.

Words appear to be feeble in summarizing the CIA's heinous and insidious spying mission, and thus, even the fiercest denunciation and response to its spying intentions would be an underreaction. If the CIA's record of holding up a vial of washing powder and calling it "Saddam's anthrax," concocting accusations of WMDs as a pretext for invasion and, most recently, surrogating biologists to trace the origins of the COVID-19 do not provide enough telling evidence to show that the spy agency is crooked, wicked, and ignoble in nature, then nothing will.

The US is keen on carrying the banner of making the world a better place, but in retrospect, isn't the world's only superpower consumed with greed for dominance and hegemony at the expense of regional stability and other countries' national security? Isn't it a fact that where there is a US military and intelligence presence, there always exists endless turmoil and conflicts (like in the Middle East where the US has finally partially pulled out this year and in the Asia Pacific where the US is preparing to pivot towards)? And despite the fact that the US media always rush to bite China first and claim that it is China who is "bullying " other nations, isn't it a universally recognized truth that the US was, is, and will apparently always be bent towards worldwide bullying?

But living in a world brimming with fancy smartphones, electric cars, and problems that are made internationally, we ought to wonder whether the CIA's perilous act to spy on the whole world and set up a new China mission center is really sustainable. Won't the move merely serve to widen the rift between the two nations, discourage economic and people-to-people exchanges while flaring up regional tensions? And how can we believe that climate change, the global pandemic, poverty, and other issues of international concern, which rely on cooperation and trust, might somehow be ameliorated with the growing presence of the CIA?

The US should stop following its old cold war playbook, as if drawing a direct parody with 007 movies, said Qin Gang, Chinese Ambassador to the US, in response to the CIA's new China mission center earlier this month. True, eavesdropping on world leaders' cellphones won't help the US to regain trust, spying on global citizens through the prism of a surveillance web won't help the US feel more secure, and setting up a new mission center targeting another country won't help the US gain influence or address any of its pressing issues. Except for stirring up yet more trouble and further burying the root of distrust, the new China mission center may have very little to show for itself.