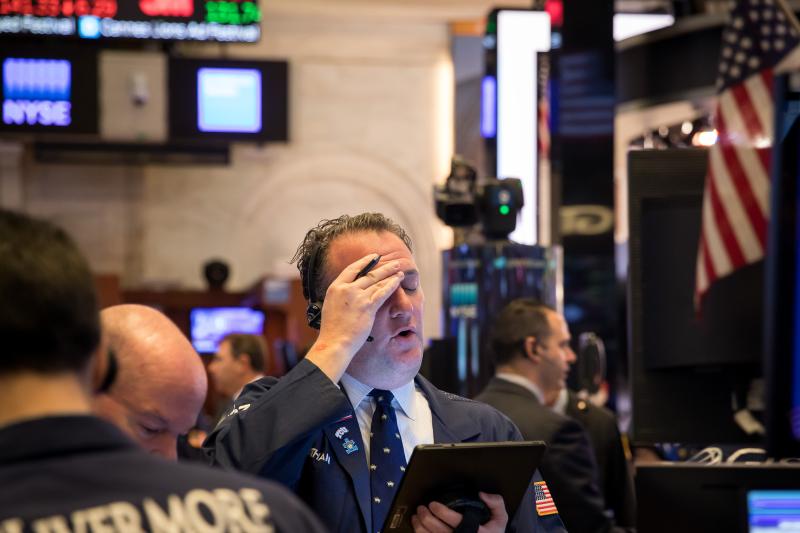 The S&P 500 tumbled 7% at around 1 p.m. on March 18 Eastern Time, triggering a key circuit breaker that halted trading for 15 minutes. It was the second time this week that the circuit breaker has been tipped. (Photo: Xinhua)

Since the founding of the circuit breaker system in 1988, circuit breakers have been triggered five times in the U.S. stock market, with four halts occurring consecutively this March. The U.S. stock market, which the Trump administration once boasted as one of its highlights, has dropped repeatedly as the COVID-19 pandemic has taken hold. While seemingly accidental, this was actually an inevitable consequence, and one which has revealed four major contradictions existing in the U.S.

The first is the contradiction between coronavirus fears and market confidence. The unprecedented four circuit breakers all occurred during the COVID-19 pandemic, meaning the coronavirus is a trigger that cannot be overlooked. The stock market, known as “the most important and sensitive barometer of market confidence,” is greatly influenced by expectations. A drop is therefore not surprising, considering the instinct to avoid risks, and public panic will certainly be reflected in the stock market. The Dow Jones has fallen below the level it was when President Donald Trump took office on multiple occasions, wiping out years of gains long touted by the Trump administration according to U.S. media. Unless the United States effectively keeps the coronavirus at bay, the market will remain unstable, or even continue its downward trajectory. Therefore, if the U.S. wants to rescue the market, it must first bring the pandemic under control.

The second is the contradiction between government response and market reaction. The pandemic itself is not the root cause of circuit breakers being triggered on U.S. stocks or the economic recession. Rather, the problem lies in the lax and ineffective response of the U.S. government. The U.S. government’s slow reaction and mismanagement led to the rapid spread of the pandemic in the country, which led investors and the public to panic and become pessimistic. Currently, this is the belief of the American people and also the consensus of the international community.

After the U.S. stock market plunge triggered circuit breakers for the first time this year, the U.S. government’s irresponsible attitude and image caused the market to continue its precipitous fall, while their various inconsistent statements and behaviors further aggravated market anxiety. In the days that followed, the Dow Jones triggered the emergency circuit breaker on three occasions and the world showed its distrust of the Trump administration.

When U.S. stocks plummeted, President Trump accused the Federal Reserve of being “slow to act”and cutting interest ratesinsufficiently, repeatedly tweeting to demand the Fed cut rates even further. He tried to shift the blame onto the Fed, but in fact, the market still fell even after the interest rates were cut by 50 basis points on March 3. This reflected the public concern that the pandemic is heightening the risk of the U.S. and the global economy heading into recession. As the Wall Street Journal pointed out, this kind of move by the Federal Reserve is reserved for times when the economic outlook has quickly darkened. Due to the recent collapse in oil prices, financial markets have indeed entered their most volatile period since 2008. Generally speaking, the crash in stocks reveals the market’s distrust of the U.S. government. The government failed to reflect on the situation and fix things in a timely manner. Instead, they were racking their brains deciding how to deflect the blame.

The third is the contradiction between economic cycle and market profit-seeking. The U.S. is in the longest economic recovery cycle on record. Its global debt accumulation, declining credit quality and decades of low interest rates have pushed its asset prices to unsustainable levels. The economic structure that is highly dependent on the service industry has made the U.S. vulnerable to the impact of the epidemic. In an article titled "Why the Coronavirus Could Threaten the U.S. Economy Even More Than China's," the New York Times pointed out the United States is substantially more reliant on services than China is, but a major coronavirus epidemic in the U.S. may act like a big snowstorm that shuts down most economic activity and social interaction, so the economic consequences would be worse.

From the perspective of some foreign economic experts, the overall structural adjustments to the U.S. economy are not in place, the domestic economic cycle is over, and the government is chasing short-term capital market interests. While a series of factors are combining to each play their role, the pandemic has only given the U.S. stock market reason to decline. Trying to seize small gains without considering the bigger picture has led the United States step-by-step into its current situation.

The plummet of the U.S. stock market could trigger a systemic liquidity crisis, "deep recession" of the U.S. economy, and even have a wider impact on the global economy, which are the deeper issues that need attention. The trading curbs triggered in the U.S. stock market were the result of a compounded impact on the U.S. economy caused by multiple factors. The epidemic has only brought those already deeply rooted problems in the U.S. market to the surface.

The fourth is the contradiction between global volatility and market bubbles. These intensive trading curbs are not only an inevitable result of the accumulation of the U.S. stock market bubble, but also an indication that the U.S. stock market bubble has burst. Many investment institutions have concluded that the continual rise of U.S. stocks over the past several years is unsustainable in the long run. The spread of global epidemics, along with the collapse in crude oil price that hit investors' appetite for risk, and the plummet in global commodity market prices, made the impact of the COVID-19 epidemic on the economy, trade and finance become even more apparent. It is clear that the problem behind this is not just U.S. stocks. In fact, it is also the big shuffle of global financial market assets and a huge test for economic crisis amid the epidemic. This is a problem that the entire world must face. Whether in the future it is oil price or the capital market, the solution lies in the degree of epidemic prevention and control work in each country.

South Korean newspaper The Chosun Ilbo published an editorial, pointing out that countries must work all out in order to prevent financial markets and the real economy from collapsing over the coming months. At present, to greatly reduce the impact of the pandemic on the global economy, countries must adopt internationally coordinated policy responses to avoid a series of catastrophic chain reactions and even a global economic recession. In a time when the economic impact of the pandemic is becoming more and more obvious, it is useless to try and look for scapegoats. It is in fact the due responsibility of countries to face the problems and solve them.

The authors are from the Academy of Contemporary China and World Studies. The English version was translated by Zhang Rui, Zhang Liying and Wang Yiming.

Opinion articles reflect the views of their authors, not necessarily those of China.org.cn